Reasons To Be Cheerful: Jennifer's Body

I'm finding the writing of these columns quite interesting compared to writing reviews. Don't get me wrong, I love writing film reviews and feel that I am slowly developing a style of my own and that each review I write is improving in quality from how they used to be, but so far these have surprised me much more than any review I have so far written for this blog.

Let me explain, up until a few days ago, I didn't know what films I was going to talk about this week since last week's combination of The Fantastic Mr. Fox and Alice In Wonderland was almost too perfect. Two films by directors I have differing opinions about, both based on childhood favourites of mine and which both release their first trailers into the ether within weeks of each other. It's just too perfect.

When it came to do this week's entries, I actually had to scour around and, whilst my job isn't all that demanding, I do occasionally have to work and that eats into my trailer searching time (shorn of context, that last sentence makes it sound like I like crawling under caravans. I do enjoy that, but this is neither the time nor the place to discuss such things). Then I settled on Jennifer's Body, not as a Reason to be Cheerful, but as a Reason to be Fearful, since I've been on the fence about it for some time now and I felt that I was finally ready to fall into the 'meh' camp.

Then I saw the trailer for an upcoming horror film that has a markedly similar premise to Jennifer's Body, but with none of the redeeming factors, and I decided that I should probably take a stand for hip, funny horror against derivative, stupid horror.

Without much further ado, let's talk about Jennifer's Body. 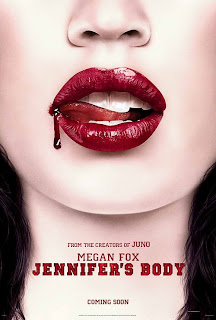 Jennifer (Megan Fox) is a possessed cheerleader who seduces boys and eats them. She engages in casual flirtation with her best friend, Needy (Amanda Seyfried) and, wait, 'Needy'? That's seriously the name of a character in a film? Needy Lesnicky? That better be a nickname, I hope to God that it's a nickname. Okay then. Anyway, Needy discovers Jennifer's secret and is put in a moral dilemma, torn between her desire to help people and, if the trailer is anything to go by, her desire for Jennifer.

Here's the trailer if you fancy a taste.

Let's get the negatives out of the way first; yes, it stars Megan Fox, an actress who by her own admission doesn't think that she is particularly good and who I have displayed a certain degree of apathy, verging on antipathy, towards in the past. Yes, the marketing for the film has been a bit leery and focused too heavily on Fox's supposed sex appeal, rather than anything to do with the film (apart from that ghastly ''From the mind of Diablo Cody'' tagline). And yes, it is directed by Karyn Kusama, who's previous credits include the live-action film of Aeon Flux. Aeon. Flux.

I acknowledge and accept all of these things when I say that I excited about this film.

Even if the film insists on rather pompously saying that it is from 'the mind of Diablo Cody', I have to say that I am quite interested in seeing what that mind will usher forth. I was really quite taken with her previous effort, Juno, for which she won an Oscar. Now, I don't think she necessarily deserved it, her script was painfully self-conscious and the opening 15 minutes did make me want to rip my own eyes out and stuff them in my ears, but it was a surprisingly warm script and, whenever Ellen Page wasn't talking, it was really quite funny.

The trailer suggests that Cody's smartalecky style of writing may actually be better suited to a horror film. Amanda Seyfried's assertion that Jennifer is really evil, not high school evil is nicely pitched line that acknowledges the slight campiness of the concept whilst also working a good joke in its own right. Though there's every chance that that may turn out to be the best line in the whole movie, I think that Cody may have found the right vessel for her style, one which won't feel quite as forced as parts of Juno did.

The idea of an (apparently) attractive woman going around killing men is also strangely appealing. There's a strange feminist sub-text to the idea which, if explored well, could make the film quite an interesting prospect. The sexuality of the main characters could also create an interesting dynamic, though it could just as easily be a ploy to get sex-addled teenage boys into the theatre. I'm hoping its the former, but fear that the latter may be closer to the truth.

As well as the possibility presented by the writing, I have to say that the cast has got me very excited. Amanda Seyfried is, I think, a very under-rated young actress who was great in Mean Girls and managed to walk away with some dignity from Mamma Mia, unlike Stellan Skarsgård, for example. Further down the cast, we come to three of my favourite comic actors; J.K. Simmons, Adam Brody and Amy Sedaris.

J.K. Simmons is perhaps best known for his scene-stealer turns in the Spider-Man films as J. Jonah Jameson, but he's also stolen scenes in plenty of other great (and not s great films). Put him in a film, and you are guaranteed that some parts of it will be funny purely because he is a very funny guy. Likewise Adam Brody who, despite being a somewhat limited actor who has been playing Seth Cohen from The O.C. in everything he's been in for some time now, is still a really charming and witty actor. Put him in a campy horror romp, which is what Jennifer's Body seems to be, and you can't go far wrong.

It's the presence of Amy Sedaris that genuinely intrigues me, though. Sedaris is best known in some circles for playing Jerri Blank, the main character in the late-90's/early 00's TV show Strangers With Candy, the show that is now most notable for launching the career of Stephen Colbert. Sedaris co-created and starred in the show as a former drug addict who goes back to high school in her 40's, making all the wrong choices again, but for all the right reasons. The dark humour and biting wit of the show has given all the creative crew carte blanche to do whatever they want, as far as I'm concerned, and so Sedaris' role in Jennifer's Body, however minor it may be, has increased my interest a good 27%.

As I said in the introduction, I am a little bit ambivalent about this and was spurred on to fall on its side purely because another film that looks absolutely wretched made me think that this one didn't look so bad after all, but the more I think about it, the more fun it looks and the more I think that I may actually be able to drum up a bit of excitement for it.

So, maybe not a Reason to be Cheerful, but its at least a reason to be curious.
By Edwin Davies
Newer Post Older Post Home