Reasons To Be Fearful: Sorority Row

In yesterday's article I hinted that my decision to champion, in my small, insignificant way, Jennifer's Body was less to do with the merits of that film than the fact that I had seen a trailer for another film that I thought was looked so horrible that I had to latch on to Jennifer's Body as a sort of defense mechanism. The film is Sorority Row. 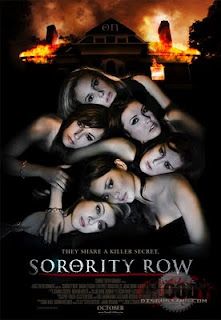 First off, terrible poster. Is it a horror film? Is it about lesbian arsonists? I don't know!

But that's just the tip of the awfulness, as the trailer will attest.

Sorority Row may achieve a degree of notability for being the most derivative film ever made. Just in that short clip I was able to count off the following films that it ripped off:

Now, this is at least partly excusable by it being a remake of a long forgotten film from 1983 called The House on Sorority Row, and there is an argument that could be made that this is part and parcel of the horror genre, that each film pays homage to the films that went before, but this just looks like they've got the scripts for those previous films, cut them up then stuck them together to form a 'new' script from old material. It's a remake of a sub-standard Halloween rip-off that's been clumsily updated to the modern age.

Speaking of which, will people please stop using picture messaging as a story point in films! This is the second horror film this year, after the British ''Skins meets Scream and fails to be as good as either'' horror film '' Tormented (in fact, doesn't the poster for Tormented look very, very similar to the one for Sorority Row?). Technically it's the third if you count State of Play, but that was a film about new journalism vs. old journalism and it felt natural to the story. It was also quite good, which Tormented wasn't and Sorority Row looks like it won't be. Nothing dates a film like attempts to be ultra-modern, and the combination of a seemingly supernatural killer (though, given the genre, it'll almost certainly be a living relative/friend/unrelated side character who does the actual killing) with a contemporary technology seems incredibly clumsy. It's comparable to Shelley Duvall trying to send a fax whilst Jack Nicholson is hitting the door with an axe; it kills all suspense by making it seem as if the film is shouting ''LOOK HOW FUCKING HIP WE ARE!'' at the audience.

I perhaps shouldn't get this worked up by a remake to a long-forgotten slasher film that will no doubt make about $15 million on opening weekend then disappear after making about double that in total, much like every other modern day horror film, but this is just the latest example in a trend that is slowly killing horror in Hollywood. Horror has the potential to be such an inventive and innovative genre with plenty of opportunity for directors and writers to explore the darker side of human nature. Some recent horror films, such as [REC] and The Descent have done this, but these films were Spanish and British respectively (and the former was functionally remade as Quarantine for the U.S. market).

Most of the current trend of horror films are either half-hearted remakes that increase the gore at the expense of genuine scares (The Texas Chainsaw Massacre, Halloween, Black Christmas) or are so derivative that they feel like remakes when they actually aren't (The Unborn). Even the remakes that are now being made are of films that weren't much cop in the first place. Sorority Row? Black Christmas? Who cares about those?

Of course their being second-rate may be considered a reason for remaking them; they weren't good the first time around, why not make them better and for a new audience? But the people making these films aren't John Carpenter or David Cronenberg and the resulting films aren't The Thing or The Fly. The people remaking these films have little or no interest in improving on the original or updating it for the modern age, they just care about making films cheaply, quickly and with just enough scary moments to make a three minute trailer that will recoup their budget and marketing costs.

It's this mentality, this lack of genuine love and affection for horror amongst people who make mainstream horror films, that drives me to support Jennifer's Body, a film which I otherwise haven't really felt too strongly about either way. At least that film looks like it's had some care put into it and is based on an original script, it's not just a hack-job that's been put together to cost as little and make as much as possible. Sure, it's a commercial movie, but it just doesn't have the same cookie cutter mindset of the likes of Sorority Row.
By Edwin Davies
Newer Post Older Post Home