"Darfur is so old, what's next, what's Darfive?" 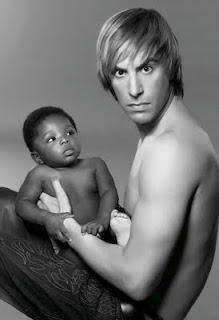 Brüno (Sacha Baron Cohen) is the hottest fashion reporter in Austria, until a wardrobe malfunction at a Milan fashion show costs him is job. With no one but his assistant's assistant for company, Brüno embarks for Los Angeles in the hopes of becoming a superstar, interviewing a host of people from all walks of life along the way.

There's an air of desperation about Brüno, as if the film-makers are trying incredibly hard to be funny, in doing so making the humour feel forced. Sacha Baron Cohen has said in interviews that he has to retire his characters after each film since every person who sees them is one less person he can trick, so perhaps the desperation stems from wanting to give Brüno a good send off. Perhaps he sees that, with his last character being retired, a period of his career is ending and he is not sure what will happen next, making the need for Brüno to be hilarious all the more daunting.

Zer problemen mit Brüno are eczemplified by a zene early on in vitch he has rarzer graffick zex mit ein pygmy. The scene is too silly to be shocking, too frank to be funny and too puerile to be provocative. This unevenness lasts throughout, as the film lurches ungainly from scene to scene, unclear whether it wants to shock, provoke or make us laugh. Though it often achieves one, it never settles down into a groove that allows it to do all of them consistently or one of them exceptionally.

When it works, Brüno manages to deliver funny, shocking lines that expose the hypocrisy, prejudices and stupidity of its targets. For example, a scene in which Brüno goes hunting with a group of very homophobic men has one of the most beautifully sustained moments of awkwardness I've ever seen as he announces his feelings of vulnerability to a painfully prolonged stony silence. When he picks the right targets and sets the right tone, Sacha Baron Cohen can work magic.

Moments like this gel because Cohen shows restraint and gives his subjects enough rope to hang themselves with. When Brüno is more forthright it either comes across as awkward, such as a scene in which he sits between an Israeli and a Palestinian and confuses Hamas with Hoummus, or malicious, such as a rather mean-spirited interview with former Presidential candidate Ron Paul. Scenes like this are not exactly plentiful, but they occur often enough to emphasise how much more adroitly Cohen and director Larry Charles handled similar material in Borat.

I generally try to view films as their own entities but it has proved impossible to avoid comparisons with Borat since not only are the two nearly identical in style (as well as story), but Brüno absolutely would not have been made without Borat. No studio would have greenlit a film about a flamboyant gay Austrian embarrassing people if a film about a blunt Kazahkstani hadn't already made over £260 million, and the shadow of that film does hang heavily over Brüno.

There is just something missing from Brüno. Maybe it's a sense of danger. Even though Sacha Baron Cohen repeatedly proves that it is an absolute miracle that he hasn't been killed yet and that he has the biggest balls in comedy (possibly literally, if he hasn’t used a stunt double for one scene), Brüno just feels so much safer than Borat. He seems to pussyfoot around the material a lot more, possibly through an understandable fear that people will be more willing to beat up a homosexual than a foreigner, but possibly also through a desire to make the film palatable. He’s obviously trying very hard to be funny, rather than being effortlessly funny, and it’s like watching a singer remember singing their own song whilst drunk; he gets the tune right, but the words are off.

I'm not going to say that Brüno isn't funny because it clearly is. It's just not as funny as Borat and the desperation of the film-makers, coupled with their tendency to play it safe, makes for a disappointment.