Don't know much about history... 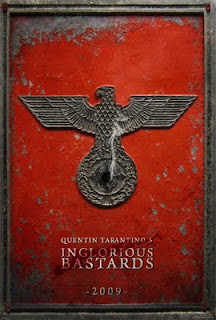 Regardless of my feelings about Quentin Tarantino's long-gestating Jewish revenge fantasy, I've got to say that his version of history is a hell of a lot more fun than real history. Filtering history through the lenses of every film made about World War II, he applies his ''movie movie'' ideas to history, re-writing history as it would have been had Sam Fuller or Peckinpah been running the war effort. Consequently, he gives us a story in which a group of Jewish commandos is sent behind enemy lines to kill Nazis in luridly brutal ways, complete with scalping and beating skulls in with a baseball bat, to create fear amongst the German army.

What Inglourious Basterds best illustrates is Tarantino's skill as a writer and director, but not necessarily as a film-maker. Essentially, it is a film which is well-directed, is written in the loping, lyrical style and features the laconically loquacious characters to which we have become accustomed, but which, for some reason, disappoints. It's problems are wide ranging and run deep. It's far too long, at least an hour too long, and there are far too many indulgences on the part of Tarantino, be it in the form of a pointlessly long scene in a basement which serves little purpose other than to show off how good Diane Kruger and Michael Fassbender are (not that I'm complaining about them, just that the scene itself doesn't really serve any purpose by being so protracted) or the inclusion of Mike Myers in a cameo role that is distracting to a fault.

The main problem with it is that Tarantino seems to be torn over what kind of film he wants to make; he either wants to make an intense, intimate and wordy spy film full of scenes in which language, both verbal and physical, dictate the relationships between the characters and where holding up the wrong fingers can have the most dire consequences, and a rowdy, sleazy exploitation romp in which men get scalped, heads get beat in and history is gleefully re-written to the strains of Morricone songs. He can't decide which to go with, so he tries both, and we end up with a film that lumbers clumsily from one to the other.

Both elements are entertaining in their own ways - the opening scene with Col. Hans Landa (Christoph Waltz) talking to a French farmer to discover if he his hiding Jews on his farm is unbearably tense, whilst the scenes of scalping have a gooey, rambunctious charm to them - they just don't mesh together.

The plot strands of the film don't mesh together either. On the one hand, you have the story of Shosanna (Mélanie Laurent), a young Jewish girl who, after escaping from Hans Landa, finds herself running a cinema in Paris and fending off the romantic advances of Fredrick Zoller (Daniel Brühl), a German war hero. Then you have the Basterds themselves who, led by Aldo Raine (Brad Pitt) romp the countryside killing Nazis. Admittedly we hardly see them doing this, but apparently they do and they are rather good at it. Then there's Archie Hicox (Michael Fassbender), a British spy who is thrown into the mix, albeit briefly, after being involved in one of the most painfully awful scenes imaginable; Mike Myers gurning away as a British general.

Individually, these threads are fine, but they never feel as if they are part of the same story because they are not interwoven in the same way that (dare I invoke its name?) those of Pulp Fiction were. They all revolve around and wend towards the ridiculous finale, but they never cross paths or suggest that any part of the film requires any other part for the film to work. Its episodic nature, divided as it is into chapters, prevent any sense of cohesion, a problem that is compounded by the way in which the strands are forever kept apart.

It's enjoyable in places, I found myself laughing quite often and there were several scenes that were tense, but as a whole it is only 'OK'. The performances range from excellent (Christoph Waltz, as easily the best character in the film, Michael Fassbender, who out Niven's Niven) to appalling (Eli Roth, who looks like he knows that he can't act so is on the verge of tears throughout, the aforementioned Mike Myers) with varying degrees of quality between those two markers. Overall, though, it just ends up feeling so disparate and unfocused that its redeeming characteristics are undercut by its terrible failings.