Take The Money And Run

Nobody wears beige to a bank robbery! 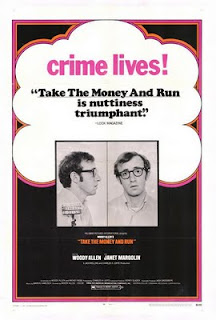 As I write this, in 2009, Woody Allen has been directing films for 40 years (43 if you count What's Up, Tiger Lily? But I don't, so we won't) and writing films for almost 50. Despite being a big admirer of his work, not all of it but most of it, I'd never seen his debut, Take The Money and Run, which was released way back in the mists of time (1969).

Woody Allen's reputation is largely built on his work in the 1970s and 1980s, when he perfected a brand of witty, neurotic but melancholic comedy film best typified by Annie Hall or Manhattan, and which reached its zenith in 1989 with Crimes and Misdemeanors. What is most striking about Take The Money and Run, watching it as I do so late in his career and with such firm preconceived notions about him as a film-maker, is what a energetic and lively performer he was in his early days.

This shouldn't be surprising to anyone, like me, who has seen Sleeper or Love and Death, both of which display his ability as a physical performer, but those are both films which are more firmly focused on Allen's verbal dexterity, not his physical dexterity. There is little dialogue for Allen in the film since, although he plays the main character, he actually says very little as the majority of the dialogue in the film is delivered by either secondary characters or by talking heads discussing the action.

And there are a lot of talking heads since Take The Money and Run is a mockumentary, arguably the first mockumentary film ever theatrically released. In it Allen plays Virgil Starkwell, a young man who grows up in New York and enters into a life of crime, rather ineptly as it turns out, and the opening 10 minutes of the 'documentary' detail his life up until his early 20s, making for possibly the funniest short film ever made; his early life trying to steal candy, only for the candy machine to get stuck on his arm; his love of the cello, which he played well enough to play with a marching band, dragging the chair along as he walked; and his eventual incarceration.

After a brief stay in prison, Starkwell is released after allowing himself to be a guinea pig for a new vaccine which, whilst successful, does briefly turn him into a rabbi. Upon his release, he meets Louise (Janet Margolin) and after 15 minutes he falls in love with her, and within 30 minutes he gives up on stealing her purse. They try to start a life together, but Virgil can't stay straight for long, and is soon, ineptly, trying to knock over banks, hampered by his bad penmanship.

Much like Sleeper and Love and Death, Take The Money and Run has a scattershot approach to its script that throws everything at the audience in a dizzying assault of comic styles. You get sight-gags, slapstick, wordplay and irony, often all employed one on top of the other. This barrage could be overwhelming but it works splendidly for one reason; the editing.

In the first of what would prove to be many collaborations, Allen's film was overseen by Ralph Rosenblum, who took the rather lax early cut and tightened it up, mixing up the lively 'film' moments with the calmer, but no less funny, documentary moments in which people who know Starkwell are interviewed to discuss the events we are seeing. The two halves of the film don't completely gel since there is no real explanation for the film parts - are they recreations? are they memory? are they part of the documentary at all? - but each part is hilarious in its own way.

In many way it foreshadows Allen's later work; he demonstrates the techniques that he would later fully realise with Zelig, his brilliant 1985 mockumentary; there are several scnes that highlight the neurotic, absurdist element that he would later bring to his more accomplished and dramatic work; and it also shows some of his early deficiencies, particularly his writing of female characters. However, it also stands on its own as something apart from much of his other work. It's a scrappy, fascinating debut that escapes being a curio by dint of how hilarious it is.
By Edwin Davies
Labels: film review
Newer Post Older Post Home