Reasons To Be Fearful: Shorts

Back-to-back blogging? I'll wear myself out at this rate. Anyway, let's continue with a bit of wittering about Robert Rodriguez's latest kid's flick, Shorts. 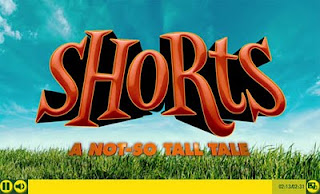 Robert Rodriguez is a very interesting guy. His now legendary debut, El Mariachi, which he made for practically nothing, all of which he supposedly raised by subjecting himself to medical experiments, has now passed into the annals of film history. His subsequent career has seen him remake and visit the world of that film twice (as Desperado and Once Upon A Time In Mexico) to diminishing returns, reimagine Invasion of The Bodysnatchers as a high school drama (the hugely under-rated The Faculty) and make a decent film out of the work of Frank Miller (Sin City), inadvertently fooling Frank Miller into thinking he has even the slightest modicum of talent as a director.

However, alongside his adult work (adolescent may seem more appropriate seeing as his films are squarely aimed at those whose development has been assuredly arrested) has been more heralded, his most successful films have been kid's films, specifically The Spy Kids series, which made a terrific amount of money despite costing surprisingly little, and achieving the terrifying goal of putting Danny Trejo in a kid's film. I think the guy is great, but he's got to be the scariest looking good guy you'll ever see. His kid's films are generally typified by bold colours, slightly dodgy effects and for being largely terrible. That trend seems to have continued with his latest, Shorts, which recently opened to massive piles of indifference in the States.

Here's the trailer if you can be bothered.

Now, there is nothing inherently wrong with Shorts, the tale of a kid in a weird town who finds a rock that allows him to make wishes that come true, with hilarious results. It's pretty bland and inoffensive, though the, way in which, the voiceover man, punctuates his, speech does annoy, the hell of out, of me. Seriously, did someone show him The Straight Story and tell him to just talk like Sissy Spacek?

My problems with the film are really to do with Rodriguez, who continues to indulge in these slight and silly films at the expense of doing the films that everyone actually want to see. He's really good at what he does, which is make fun, sleazy genre films that don't take themselves seriously and which pretty much guarantee a good time for all involved. He's hugely talented, often writing, directing, shooting, editing and scoring his own movies, and I have a huge amount of time for him. But not when he does stuff like this.

The film really does seem like something designed to make money, which is ironic seeing how it looks like to do precisely the opposite in the States. Even Spy Kids had a certain charm and vim about it, a sense that he was having fun and doing something a tiny bit personal since he had just become a father, but this just seems like he's realised that Grindhouse didn't make all that money so a cheap kid's film is the way forward if he wants to get Machete, Sin City 2 or his proposed remake of Red Sonja made. It's a calculating exercise in damage limitation that has resulted in a film that everyone seems to be scorning or ignoring. Whether that is fair or not (I know that I'm really not giving it a fair shake, but I don't pretend to be a fair person) is beside the point, it just looks like a false and plastic film. Why this film seems to have been ignored when stuff like G-Force has been embraced does leave me a bit nonplussed, but the occasional good sense of the public does wonders for the soul.
By Edwin Davies
Newer Post Older Post Home