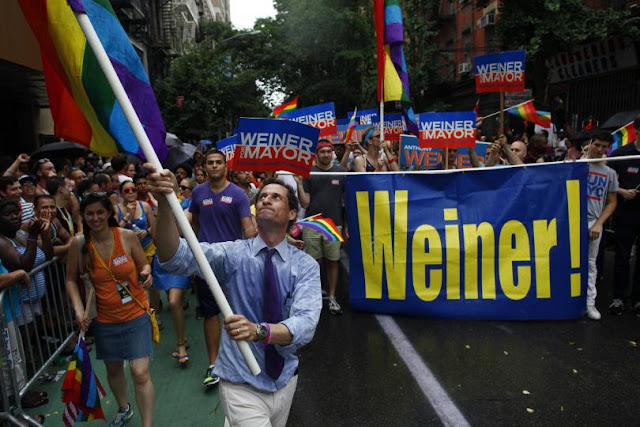 In art and politics, timing is crucial. A gaffe or scandal at the wrong moment can sink a candidate, or be forgotten in a matter of days, depending on when it happens. Sometimes the difference between a boring documentary and a compelling one comes down to being in the right place at the right time. Both good and bad timing are in full effect in Weiner, Josh Kriegman and Elyse Steinberg's documentary about Anthony Weiner's ill-fated run for Mayor of New York in 2013, two years after he resigned from Congress amidst a sexting scandal. It was great timing for the filmmakers since production started as Weiner entered the race and was riding high in the polls, which in turn allowed them to be at the epicentre when a second sexting scandal fatally derailed his campaign. It was bad timing for the candidate, obviously, because he's not looking ahead to his re-election campaign right now.

As someone who first heard of Anthony Weiner only once the second scandal broke, complete with the revelation that he had been sending sexually explicit texts to a stranger under the intensely memorable pseudonym "Carlos Danger", the brief glimpses the film offers of his pre-infamy days were amongst its most revealing. Seeing him give an impassioned speech on the floor of the House attacking Republicans for opposing a bill to help sick 9/11 first responders, or going toe-to-toe with opponents on television, it's easy to see why he was such a successful politician and a rising star in the Democratic party. His pugnaciousness and intelligence, combined with an undeniable charisma, mark him as a compelling firebrand, the sort of person who can rally people through sheer force of personality. That carries over into the mayoral campaign itself in the ways in which his staff and supporters express their unbridled enthusiasm for him as a candidate and a person.

It also makes for the film's funniest moment, when Weiner's raucous reception at New York Pride is contrasted with the almost non-existent response to eventual Mayoral winner Bill de Blasio. You will find few better examples of comedic editing in film or TV this year.

Kriegman and Steinberg don't linger on the early parts of Weiner's career or his first scandal, but offering that bedrock of context is enough to establish Weiner as not merely a fuck-up, but a classically tragic one. He comes across as a smart, savvy and passionate politician who can't stop himself from blowing up his life in the dumbest, most easily preventable way possible. He's surprisingly sympathetic because it's easy to see why people like him and how he could do great things if he just wasn't him. It's an impression which has been reinforced in recent months since, in what may be the most misguided attempt at viral marketing in recent memory, he was involved in a third sexting scandal just as the documentary was hitting home media.

In addition to giving the lie to the end of the film, which finds Weiner returning to the arena as a pundit on panel shows - one who is happy to mock his fall from grace alongside the likes of Bill Maher and John Waters - these more recent developments add an extra significance to the involvement of Huma Abedin, Weiner's wife. Abedin is mostly a peripheral presence in the film, only occasionally coming to the fore to stump for her husband when the campaign is going well, and to express anger and frustration at him once Carlos Danger enters the picture, but her every appearance feels much more loaded now. Even at the start, in a scene in which the two are at home playing with their young son, she projects the image of a woman who believes that her husband can win, but also knows how badly he has stumbled in the past, and how much potential there is for him to do so again.

For the most part, Abedin serves as something of an audience surrogate; understandably wary, but willing Weiner to succeed because a redemption story is a satisfying one, then exasperated that he not only blows it, but does so in exactly the same way as before. But there are also flashes of the deep pain that comes from such a public betrayal. At one point she tells the crew to stop filming so she and Weiner can talk, while a scene towards the end in which Weiner has to dodge the woman he was sexting with, in full view of the press, is punctuated by Abedin expressing her horror at the thought of being faced with the woman who was a key contributor to the whole mess. The filmmakers are careful not to exploit the pain of the participants, instead showing us a more dispassionate view of what it is like at the centre of a hurricane, but that means that the few bursts of raw emotion are all the more uncomfortable and notable.

That razor sharp focus on Weiner and his confidants makes for a compelling character study, but it also ends up giving short shrift to the broader context within which the scandal occurred. There are several montages cutting together clips from actual news reports and commentary, as well as some from The Daily Show and The Colbert Report. Placing those clips alongside each other suggests the way in which news, punditry and entertainment have become almost indistinguishable, but it's quickly confined to a background detail. Such points may be obvious at this juncture, but that doesn't mean that they aren't worthy of consideration.

The nature of sexting, meanwhile, and ways in which Weiner's transgressions compare to more traditional sex scandals, are only mentioned when Weiner reads an article delineating the ways in his actions do not fit traditional definitions of adultery. As more details emerge, that argument becomes noticeably harder to sustain, but there is an interesting discussion to be had about how his initial actions are closer to Jimmy Carter committing "adultery in his heart" than Bill Clinton's indiscretions. There's also the question of whether the media became so fascinated with his case because the sexting angle made the situation more novel, something which the film again nods towards, but ultimately doesn't have time to interrogate.

The whole debacle stands at a crossroads between so many interlocking and conflicting ideas about sex, politics and the media that it inevitably touches on a lot of subjects without diving too deeply into any of them. Having source material that is too rich is a good problem to have, of course, and there is no greater endorsement of a film than wishing that it was longer.