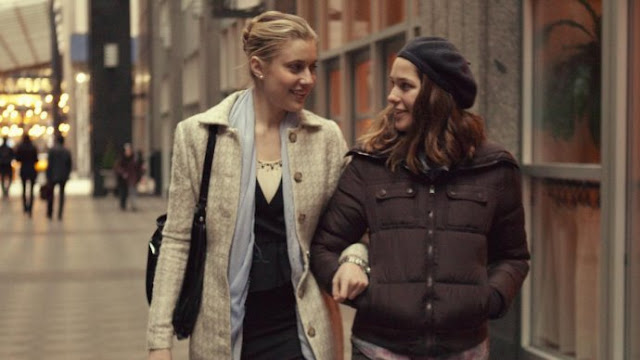 You don't see many screwball comedies these days, and by "these days", I mean the last six of seven decades. Like the Western or the detective drama, it's a once prominent cinematic genre that has fallen out of favour because it feels antiquated, and because its style has been co-opted by television. If you want to watch rapid-fire banter in farcical situations, there are dozens upon dozens of sitcoms that provide it, with the added bonus that the same characters will be back at the same time next week. Even when new additions to the genre do come around, they tend to be pastiches or homages like What's Up, Doc? or The Hudsucker Proxy. Films which are themselves now decades old, but even when they were new looked to the past, reaffirming the idea that this is a genre belonging to a bygone age.

Noah Baumbach's Mistress America is a rare and refreshing attempt to take that style and make it work in a modern setting, even though that approach brings its own problems. The characteristics of the genre are all there: witty dialogue delivered at a blistering pace, farce, romantic intrigue, and a story centered around ambitious female characters. The only major difference, conceptually, between Mistress America and a Hollywood film from the 1930s is that you wouldn't hear Carole Lombard say "fuck" (at least not on-screen). In tone, pacing, and subject matter, Baumbach and co-writer Greta Gerwig are playing in Howard Hawks' backyard, and they acquit themselves admirably.

In telling the story of Tracy (Lola Kirke), a college student newly arrived in New York who befriends her older, soon-to-be stepsister Brooke (Gerwig), the film delivers a stream of non-stop jokes, all of which come from the characters of two women at very different times in their lives. Tracy is full of ambition and wonder but daunted by her new surroundings, and as such is drawn to Brooke, who seems so at home in New York and carries herself with a great degree of self-confidence. For her part, Brooke finds Tracy's relentless encouragement invigorating, especially when it comes to her creative and business endeavours, such as her plan to open a restaurant. They are thrown together because their parents happen to be dating, but they quickly establish a warm and sisterly affection.

Their relationship is much more complicated and dysfunctional than their initial interaction suggests, though, and Baumbach and Gerwig tease those out gradually as the characters get closer. Tracy is partially drawn to Brooke because she provides great fodder for stories she writes and submits to a literary society at her school, while Brooke's life is constantly on the verge of collapse, so hanging out with Tracy gives her someone to impress. While the jokes in and of themselves are frequently incredibly funny, and Gerwig and Kirke do a masterful job hurling bon mots at each other with vim, most of the humour comes from the increasingly massive gulf between what the two women pretend their friendship is about and what is actually motivating it. It's a smartly handled dynamic, both in terms of the writing and the performances, which deepens as the story progresses and the cracks in Brooke's life grow into fissures.

Before that happens, however, Mistress America displays some awkwardness as it balances its setup against its torrent of jokes. For the first half an hour, the film constantly feels like it's out of breathe. It pinwheels from new situation to new situation, introducing new characters and new complications while trying to couch necessary exposition in jokes. It's largely successful, but it's also strained, like a singer who messes up the words to their own song, recovers, but can't quite shake off the unforced error. It's never bad, but its eagerness does grate.

The film shakes off those jitters completely in its last hour, however, which takes Brooke and Tracy - along with Tony (Matthew Shear), a fellow student who Tracy has unrequited feelings for, and his girlfriend Nicolette (Jasmine Cephas Jones) - to a big house in the country. Confining the film to a single location, adding more characters with competing motivations and dynamics which complicate Tracy and Brooke's friendship immeasurably, transforms it into a sublime farce. Characters wander in and out of rooms, dialogue (and whole conversations) overlap, and reveal things about themselves and others which create a maelstrom of comic energy which the first act nearly manages (such as in an hilarious scene in which Brooke and Tracy visit a fortuneteller for advice, which finds Brooke getting increasingly angry at the "spirit" being consulted), but never quite reaches because it's always in such a rush to get on to the next scene. The dialogue doesn't slow down for a second, but the characters do, and it enriches the experience tremendously.

Brooke and Tracy's first meeting takes place in Times Square. As Tracy looks around, she hears a voice, and looks up to see Brooke standing on the TKTS bleachers, which she then slowly and awkwardly descends, her big entrance being somewhat undercut by the practicalities of walking down illuminated bleachers at night. It's a funny moment, in part because of the way that Gerwig shows Brooke straining to maintain her big smile as she concentrates on not falling on her face, but it's also an apt metaphor for Mistress America itself. It arrives with a fanfare, keeps a brave face as it struggles through some initial awkwardness, before finding itself on firmer ground. Once it reaches that point, it settles down to the business of being one of the most vibrant and effervescent comedies in years.