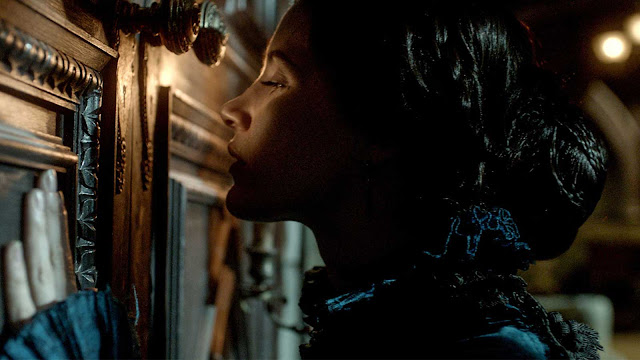 When aspiring author Edith Cushing (Mia Wasikowska) goes to see an editor about a story she has written, she responds to his describing it as a ghost story by saying that it's actually "a story with a ghost in it." A similar sentiment could be applied to the film in which she finds herself, since Crimson Peak is not a horror film, but a film with horror in it. While it does feature spurting arteries, decaying corpses and a haunted house, most of those elements are employed sporadically, or are restricted to the film's exuberant finale. For most of its running time, it's a Gothic romance with a dash of sinister mystery thrown in for flavour.

In telling the story of how Edith meets and falls in love with Sir Thomas Sharpe, Baronet (Tom Hiddleston), who whisks her away from Brooklyn to Allerdale Hall, his family's traditional home in Cumberland, Crimson Peak deliberately echoes Jane Eyre and Rebecca. All three are stories of young women leaving the world they know for large, desolate houses throbbing with mystery, choked by a past which the women have to unravel in order to understand their current predicament. There's even a handy Mrs. Danvers figure in the form of Lucille (Jessica Chastain), Sir Thomas' imposing sister and partner in whatever secretive business the pair have planned for Edith. Although it's thrills are a little more visceral, Crimson Peak starts out from a fairly classy vantage point.

Even though it's more explicitly supernatural than Bronte and Du Maurier's works - the film opens with Edith saying "Ghosts are real" before receiving a cryptic warning from her dead mother - it uses their basic components, then supercharges them. Allerdale Hall is not just a grand, isolated house, it's in such a bad state that there is a massive hole right in the ceiling, through which fall all manner of debris. Owing to the red clay that the Sharpes mine from beneath their home, the snow that covers the grounds appears to bleed almost as profusely as the cast members, while the pipes run red whenever Edith has a bath. Cinematographer Dan Laustsen shoots every scene like one of Roger Corman's Poe adaptations, or one of the more elaborate Hammer offerings (Edith's surname certainly hints at that influence); it's all lavish production design overwhelmed by lurid colours. Del Toro and co-writer Matthew Robbins reduce Gothic storytelling to its core elements, then push them as far as they can possibly go.

That approach makes for a fun experience, particularly if you're familiar with all the touchstones, but it's also a slightly hollow one. The characters involved are all archetypes, which is perfectly suited to the fairytale rhythms of the story and the heightened tone created by its imagery, but it never approaches the emotional resonance of del Toro's earlier melancholy fantasies like Pan's Labyrinth and The Devil's Backbone. It's not for lack of trying, since everyone involved is clearly committed to breathing life into the characters, with Jessica Chastain in particular wringing every ounce of melodrama from Lucille, and there's plenty of tragedy, heartbreak and repressed emotions to go around.

The problem comes from the film's pacing, which seems to stem from an overzealous eagerness to please. Del Toro is one of the great enthusiasts, a director who loves cinema in all its forms, which makes his work a treasure trove for film lovers. In the case of Crimson Peak, he seems so eager to show off all the beautiful, crazy images he has in store that he cuts off pretty much every scene and emotional beat a few seconds too early. Moments that could stand to linger for a while, either to create a sense of dread or which would allow for little grace notes, are ruthlessly shortened. For its first two-thirds, the film feels like it is constantly interrupting itself, desperately trying to get to the next scene before the current one has even finished. That makes it an admittedly speedy watch, but one which is occasionally strangled by its own creativity.

However, most of that goes away in the last act. Once the mystery has been resolved and everyone's cards are on the table, the actors stop suppressing the more ostentatious aspects of their characters and the story pushes into unsurprising but entertaining avenues. It moves away from aping the more restrained atmospherics of The Haunting into full-blown giallo histrionics, and it's all the better for it. Shifting gears so drastically unbalances the film, but it also allows it to go out on a high. The first hour or so is fitfully compelling (but consistently gorgeous to look at), but the last twenty minutes are about as entertaining as any film I've seen this year.