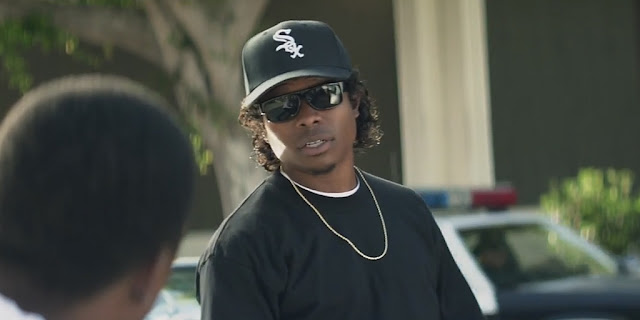 More than most biopics, Straight Outta Compton perfectly mirrors the arc of its subject: much like N.W.A., the film is at its best before they become millionaires. That's partly due to a problem inherent to telling this kind of story. It's always going to be more fun to watch a bunch of friends form a group and become superstars than it is watching them fall apart in a slow series of recriminations. Beyond the structural problem of telling a story that peaks in the middle, though, director F. Gary Gray approaches the two halves of the story in markedly different ways.

The opening half of the movie, which covers the formation of N.W.A around the central trio of Eazy-E (Jason Mitchell), Ice Cube (O'Shea Jackson, Jr.) and Dr. Dre (Corey Hawkins) - the other members, M.C. Ren, DJ Yella and The D.O.C. (played by Neil Brown, Jr., Aldis Hodge and Marlon Yates, Jr.) are present but are quickly marginalised - is as much about recreating the atmosphere of Compton in the 1980s as it is the about the group who immortalised it. Consisting of lots of short, sharp scenes establishing who the characters are - including a thrilling opening in which Eazy has to escape across rooftops when the police bust a drug deal that was already threatening to turn bad - as well impressionistic, gorgeously hazy slice-of-life inserts, it stakes out a middle ground between the verve of Goodfellas and the mosaic-like sense of place of Killer of Sheep.

That approach perfectly suits the film, since it allows Gray to tell the personal story of who N.W.A. were, as well as that of the broader context from which they emerged. There's scenes of Dre and Cube connecting over music and getting into trouble when Dre allows Cube to rap during his DJ set, but there are also brief yet powerful glimpses of the police brutality and institutional racism they faced as young black men living in America. The group's commercial peak plays out alongside recreations of the L.A. Riots, and the two strands meet at the film's most triumphant moment; a performance of "Fuck tha Police" in Detroit which ends with police storming the stage, the group being taken away and their fans tearing the place apart. The film reaffirms the idea that gangsta rap - or reality rap as the group initially call it - was a reflection of the world that N.W.A. lived in, rather than a glamorisation of it.

While that makes for some moments that feel too neat - such as one in which Ice Cube writes the lyrics for "Fuck tha Police" immediately after being harassed by the police - even at its tidiest the film has an energy and vitality that most biopics can only dream of. Most of that comes from Gray, a solid journeyman who seems invigorated by the opportunity to tell a story with heft and relevance, but also from his cast. As young actors with relatively little experience, they bring a genuine  enthusiasm that is perfect for a story of young men being thrust into the limelight. While Hawkins is good as a slightly naive Dr. Dre and Jackson is great at mimicking his father, it's Jason Mitchell who steals the film as Eazy-E, making him both a street-smart hustler who knows a good thing when he sees one, and someone who is a little too trusting of people he takes into his confidence, allowing him to be manipulated by the group's sleazy manager, Jerry Heller (Paul Giamatti).

While Giamatti is very good as Heller, who he plays as someone who is completely convinced that he isn't a terrible person, even as he does unambiguously objectionable things, he's also a central component of what drags down Straight Outta Compton's final hour. As it moves past the "Straight Outta Compton" tour and delves into N.W.A.'s decline, it becomes less freewheeling and more conventional. There are still moments of brilliance in that last hour, including the aforementioned L.A. Riots sequence, which bristles with righteous fury and finds incredible power in the image of intertwined do-rags, and one in which Gray cuts between Ice Cube, having left over a contract dispute, recording the N.W.A.-eviscerating diss track "No Vaseline" and the group listening to the finished recording with appropriate levels of anger. But by focusing on the ins and outs of contract negotiations, the film loses a lot of its verve, something which it only occasionally regains when it delves into the decadent and menacing world of Suge Knight (R. Marcos Taylor) and Death Row Records.

It's also in the final act that the film starts to lean on obvious references that the audience will recognise, even if the characters don't, such as a terribly forced moment in which Ice Cube is shown tapping away at a computer and his wife asks him how the script for Friday is coming along. There are similar moments in the first part, but they're handled so deftly and with such energy that they don't stand out as awkwardly as the later ones, so they never feel like crutches or an excuse for an easy laugh.

Yet even as the film slows down, it still remains an exhilarating watch. Arguably too exhilarating, as it pointedly avoids any consideration of the misogyny in N.W.A.'s lyrics, or of Dr. Dre's assault on Dee Barnes. Presumably the argument in favour of leaving those parts out would be that they could have distracted from its focus on N.W.A. as a group who gave voices to the frustrations of a violently repressed people, but last year's James Brown biopic Get On Up demonstrated that it is possible to paint a sympathetic portrait of an artist without completely cutting out moments that reflect badly on them. Straight Outta Compton's omissions are ultimately more damaging than including them would have been, since they make the film out to be an effort in self-serving myth making, rather than an attempt to reflect reality in the way that N.W.A.'s music did. It's fortunate that it delivers it's questionable content with such impeccable, entertaining form.