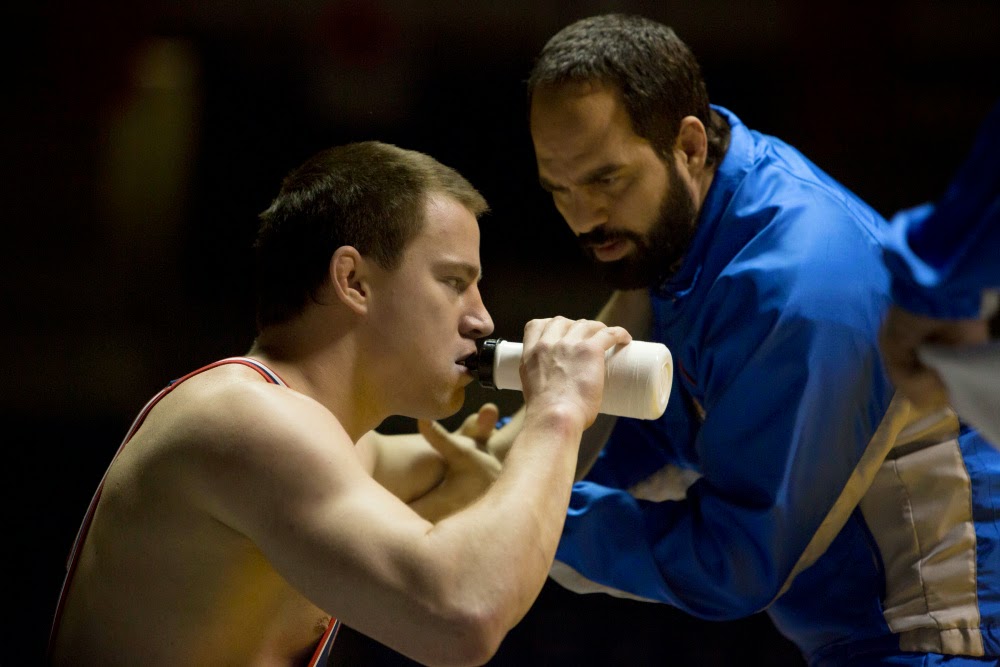 Hello. How are you? Hope you've had a good 2015 so far, and that you've found something to keep you busy until the new Star Wars film comes out, or until whatever cultural event you're looking forward to this year happens. I took the month of January off from writing blog posts, with the notable exception of my Best of 2014 list, in order to relax and unwind after a hectic awards season and from a crazy few months at my day job, and in order to watch more films for fun, rather to write about them.

But I'm back on the horse and planning to blog more this year, so I've decided to start writing posts like this one summarising my film viewing for the previous month. They're not going to be comprehensive (if you want that, you can always follow me on Letterboxd) but more an abstract of what I've been watching, complete with capsule reviews of the best and worst films I watched in a given month.

January was mainly taken up with catching up on films from 2014 that I hadn't seen yet, helped in large part by the fact that the January slate of new films is largely terrible. I also started subscribing to the curated streaming service MUBI, which means that I've been watching films that I might not otherwise have seen, which has added a lot more variety to the viewing schedule (even if it has also added more stress as I try to keep up with whatever film has been added that day). I also rewatched a bunch of Richard Linklater films for this episode of Shot/Reverse Shot, the podcast I do with my friend Matt Risby, which made for one of our better episodes and hey why not subscribe to us on iTunes?

Overall, I watched 33 films in January, of which 27 were first time viewings. Here are the ten best films I watched in January which I had never seen before.

At Sheffield Doc/Fest several years ago, a friend of mine went to a screening of Adam Curtis' then  new film All Watched Over by Machines of Loving Grace attended by Curtis himself. During the Q&A, someone described Curtis' work as (and I'm paraphrasing here) like a homeless man shouting in a street while pushing a trolley full of stock footage. While I think that is a (very funny) simplification of Curtis' work, it also does ring true since his entire MO at this point is to use his documentaries (though "film essays" is probably closer to the point) as a counterbalance to traditional media narratives. When you're the lone voice in the wilderness, you're inevitably going to sound a little mad, even when you're right.

For his latest film, Curtis employs his usual bag of tricks - a wryly funny schoolmasterly voiceover, ironic juxtaposition of music and stock footage culled from many different sources, including Tarkovsky's Solaris - to explore the relationship between the US and Saudi Arabia, beginning with the meeting between FDR and King Abdulaziz on Valentine's Day, 1945 that allowed America access to Saudi oil, but only if they in turn pledged not to push for any social change in Saudi Arabia, and then goes on to examine the role that Afghanistan has played in the various conflicts of the 20th Century.

Like most of Curtis' work, Bitter Lake is an exploration of the deadly ironies that grow out of good intentions. A typical thread in the film goes as follows: American firms build dams to irrigate areas of Afghanistan to make them more viable for farming; this creates sodium-rich soil perfect for growing poppies; the mujahideen harvest the poppies for heroin production; they sell the heroin to fund a war effort that results in the deaths of thousands of British and American soldiers. Over the course of its two hours, Bitter Lake clearly and forcefully argues that much of the chaos in the Middle East stems from the good intentions and naivety of Western governments who viewed the world in stark terms of good and evil, and who did not have an understanding of the complexity of the region.

Unlike Curtis' previous films, Bitter Lake debuted on BBC iPlayer instead of one of their terrestrial channels, which means that he doesn't have to cram everything in to an easily programmable running time or divide his argument up over several installments. It also means that it is a little more indulgent than his past work (it runs two hours and eighteen minutes, and it seems that those last eighteen consist primarily of footage of people dancing) but it also makes the film feel more cohesive, and adds to the hypnotic approach of Curtis' style. It also allows for a more evocative viewing experience, especially in the way the film argues that first the Soviet Union, and now the West, have been altered by their conflicts in Afghanistan, and how they were left "haunted by Mujahideen ghosts".

Bitter Lake is currently available on iPlayer, but you can easily find it on YouTube along with most of Curtis' oeuvre.

I'm going to finally sit down and write a full review at some point this week, but Selma was my second favourite film released last year and is a visceral rebuttal to a whole sub genre of prim and proper historical fiction which treat the past as something alien and unknowable. DuVernay puts the audience on the streets of Selma and makes us feel the impact of each beating, while also offering a nuanced and provocative look at the kind of politicking that went on behind the scenes. The way in which the film has been smeared for its relatively minor diversions from history (compared to the myriad crimes against history of, say, The Imitation Game) is nothing short of outrageous.

A long overdue introduction to the work of Assayas and I'm giddy at the prospect of seeing what else he has to offer. Using the story of a Hong Kong movie star (Maggie Cheung, more or less playing herself) who comes to France to work on a remake of an old silent film, Assayas eviscerates the French film industry of the '90s for being either stuffy and out of touch (represented by a former nouvelle vague director played by Jean-Pierre Léaud) or hopelessly enthralled by Hollywood (best explored during an hilarious scene in which Cheung is interviewed by a journalist who just wants to talk about action films). On top of that, the film is a hugely enjoyable comedy of manners filled with characters with competing egos and insecurities.

Anderson tones down the wackiness of Thomas Pynchon's novel somewhat - though not completely, as the Martin Short scenes demonstrate - but sharpens its themes. In telling the story of a detective (Joaquin Phoenix) out of time, Anderson crafts a funny, loopy elegy for a culture entering its last days, and contrasts the clarity of Doc Sportello's past with the chaos of his present to haunting effect. Like all Anderson films, it will probably grow more on subsequent visits, and I can't wait to get lost all over again.

My second Denis film after the sublime Beau Travail and I'm ashamed that I waited so long to watch this (doubly so since I worked at a cinema when it came out and could have seen it for free). It's an intimate and gorgeous family drama about a father and a daughter which recalls Ozu's Late Spring, but which is complicated somewhat by the racial and economic realities of contemporary France. The soundtrack by Tindersticks is also gorgeous.

Again, I'll have a fuller review up sometime this week, hopefully, but I thought this was a fascinating update of Sunset Blvd. and a great example of Miller's control of tone. He approaches the tragic story of the Schultz brothers the way Brian Eno approaches ambient music: the overall pitch of the work doesn't change drastically from beginning to end, but there are variations within it that can be devastating in their subtlety.

I've been meaning to watch this Canadian drama for years and it did not disappoint. A low-key, acutely observed slice of life about the Asbestos region of Quebec in the first half of the twentieth century, it manages to be both a poignant coming of age story and a clever dissection of the roiling social and political forces that would transform the area in just a few years.

Another film that's been on my Must See list for a while and another one which lived up to its promise. Working from a script by Neil Simon, May takes a story of a newly married man (Charles Grodin) who sets about trying to dump his bride (Jeannie Berlin) for another woman (Cybill Sherpherd) that could have been played for broad laughs into a scathing critique of male shallowness, anti-Semitism and American social mores. It's an absolute travesty that the Farrelly Brothers' remake is more widely available than this version.

Okay, 'best' might be a stretch, but this was certainly one of the most enjoyable films I watched this month. With its combination of martial arts, excessively gentle rock music and clearly illegal location shooting, this cheap and cheerful (then hilariously violent) oddity deserves its reputation as one of the very best bad movies.

While not quite on the same level as Michell and writer Hanif Kureishi's previous film about aging, 2006's Venus, Le Week-end is still a funny, frank film about a marriage that's cooled off and the way in which youthful ambitions haunt us when they don't come to pass. Lindsay Duncan and Jim Broadbent both give great, fearless performances, while Jeff Goldblum does a lovely scene-stealing turn as an old friend they happen to bump into on the streets of Paris.

And the worst film I watched for the first time…

Perhaps worst is a bit strong, but this was certainly the most disappointing film of the month. After a superb opening in which a man and a woman meet at a rave then go back to his flat to sleep together, a sequence which is funny, exciting and sexy as hell, the film descends pretty rapidly into tiresome philosophising that the two actors (Catherine de Léan and Dimitri Storoge) do their very best to enliven, but it's so leaden and ponderous that they can only do so much. Basically, it's really fucking French, in ways both good and bad. De Léan is phenomenal, though, and her final couple of scenes almost redeem the terrible hour that precedes them.
By Edwin Davies
Labels: 2015, january, movie journal
Newer Post Older Post Home