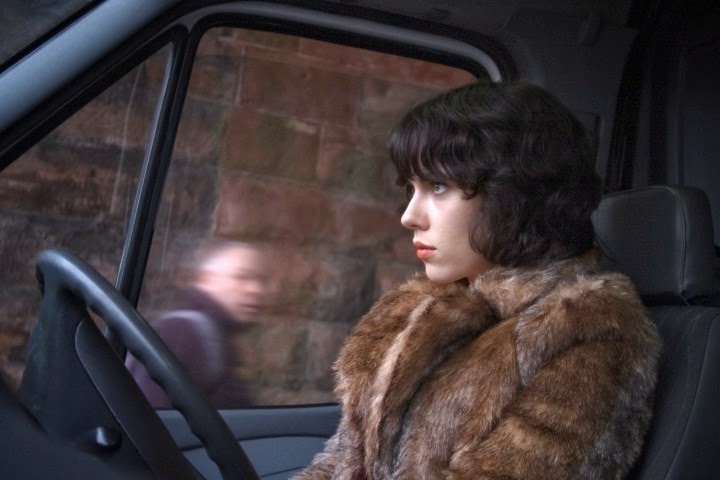 Based, in the loosest possible sense of the word, on a novel by Michael Faber, Jonathan Glazer's Under The Skin is a work of subterfuge, both in terms of its storytelling and its general concept. Narratively, the story is about an alien (Scarlett Johannson) who drives around Scotland looking for single, lonely men to pick up. Once she entices them into her van, and once she has ascertained that they don't have any family who will come looking for them, she takes them back to a farm where she manipulates their sexual desire to 'harvest' them. In order to maintain her disguise, she has to be believably human, something which she is able to do very easily within the confines of the van, but which becomes increasingly difficult and dangerous in almost any other context. It's a film which derives a great deal of tension and unease from placing its lead character in relatively normal situations, then seeing how her discomfort grows more and more palpable.

So that's the narrative subterfuge, what about conceptual subterfuge? That comes from the way that Glazer and his co-writer Walter Campbell use that simple, almost Species-like plot to make Under The Skin look like a narrative film. Its storytelling is certainly linear, as the events can be broken down into a series of encounters, some of which affect the alien more than others, and which ultimately cause tension between her and her mysterious compatriots. You could break down what happens in Under The Skin very easily, and probably describe the plot in four or five sentences, with no problems.

Its simplicity is as deceptive in its own way as the alien's oddly anachronistic, Richey Edwards-meets-The New York Dolls appearance. The plot is really unimportant in terms of what makes Under The Skin such a great film, because the events of its story have almost nothing to do with the experience of watching it. It is a film that is more concerned with mood and atmosphere than it is with character or story, and in that respect it is one of the most compelling and distressing cinematic experiences I have had in quite some time. The combination of Glazer's harsh yet icy compositions, ones which place the audience as close to the action as they can possibly be while still providing some voyeuristic distance, and Mica Levi's insidious score, which uses a handful of simple refrains to create a suffocating sense of dread and impending doom, make it seem as if we are bearing witness to something ancient and deeply terrifying.

This is particularly true during the seduction scenes, which take the form of the alien and her target walking slowly through an area of impenetrable blackness. As Johansson and her targets disrobe and pass through an infinity of nothingness, the eager young suitors slowly sink into a ground that has mysteriously become liquid, driven by their desire into their own oblivion. It's a fairly simple effect, but like everything in Under the Skin, the simplicity of the concept has little bearing on how effectively it is realised. What could look cheap or ridiculous in lesser hands becomes something indescribably awful and unnerving in the hands of Glazer.

Heightening the terror is Scarlett Johansson's performance. During the seduction scenes, she often maintains a blank, unaffected look that suggests to her victims that nothing is wrong, but lets the audience know that this is something that she has done many times before and it has become routine. But the inhumanity on display during most of those scenes contrasts sharply with the vulnerability and warmth she shows when she is out driving around the streets of Scotland. In those moments, as she is trying to convince unsuspecting men that she is just a good Samaritan offering them a lift, she has to subtly convey kindness, charm and an ulterior motive (though what that motive might be is hidden from the men she encounters, and all too obvious to us, the observers). That lends a real tension to the quiet interrogations she carries out as she tries to figure out which men might make for perfect candidates since the danger she poses to her passengers is completely obscured by her physicality. It's hard to imagine that such a petite woman could be a threat to the men she picks up, and the difference between appearances and reality is what really makes those scenes unnerving.

At other times, though, Johansson projects a depth of feeling that suggests that her task is weighing heavily on the alien. When she picks up a man with Neurofibromatosis (Adam Pearson), she radiates genuine sympathy for the way in which other humans treat him. After she finds herself swept into a nightclub, separated from the controlled space of her van and without any idea how to interact with people in that setting, her sense of disorientation and fear is palpable, and Johansson projects a sense of existing on a completely separate plane to those around her. The film succeeds in making situations that most people would not consider particularly unusual into ones that are suffused with menace. In those moments, Under the Skin conveys the strangeness of human behavior - whether it's the desire for sex, companionship, or chocolate cake -  better than any film since Nic Roeg's The Man Who Fell to Earth.