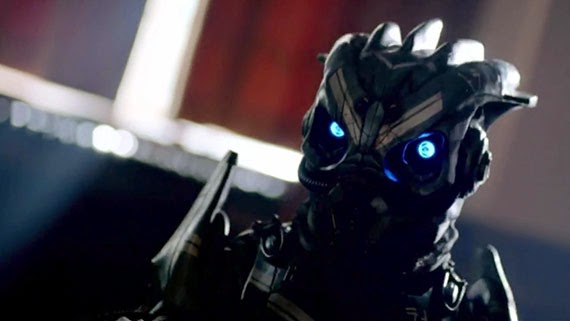 One of the refreshing things about this series of Doctor Who has been the way in which Steven Moffat and his writers have focused primarily on developing the relationship between Clara and the new Doctor. Previous series have done that as well, but they've usually mixed the growth of a new (or, given the overlap between Doctors and Companions, new-ish) friendship with plotlines that try to involve the Companions' families, most notably in the case of Rose's boyfriend Mickey and her mother Jackie. That divided focus made for some great episodes (particularly the heartbreaking "Father's Day", in which Rose got the opportunity to meet the father who had died before she was born) but more often than not it felt like baggage that was unnecessarily added on.

This year, the show has gone a little more slowly when it comes to fleshing out Clara's home life. They dispensed with the two kids that she used to nanny for, but they've also gradually introduced Danny Pink (Samuel Anderson) and established that their relationship may prove to be important - to the extent that we were introduced to one of their potential descendants in "Listen" - but it's been primarily in the background. That we're nearly halfway through the season and we're only just now getting to the point where the show deals directly with the effect of time travel on human relationships speaks volumes about the different tack that the creative team have taken this year.

Yet taking it slowly prior to "The Caretaker" doesn't mean that the episode itself is deliberate in its approach. If anything, delaying dealing with the Clara-Danny aspect of the show seems to have led to a pent up desire to really get to grips with the difficulty of unwittingly dating a time traveler. That desire is explored in a couple of minutes during the frenetically paced opening montage, duing which Clara has to juggle the two halves of her life with varying degrees of success. She's initially shown chained to a pillar on a desert planet with The Doctor, awaiting the arrival of Sand Piranhas waiting to finish them off, then the show immediately cuts to her meeting Danny for a date while sporting a tan that can only be described as teak in colour. In one of the best bits of editing in the episode, she runs into the TARDIS, then immediately jumps into a cab with Danny. (This also makes for one of the best exchanges in the episode: DANNY: You're soaking wet. CLARA: Freak shower. DANNY: Is that seaweed? CLARA: I said 'freak.')

Apart from the distressingly wacky music, which suggests that the sequence is going to end with Clara having to run between two dates at two different restaurants on the same night (though one will probably be with The Face of Bo or something), it's an effective and swift bit of filmmaking that condenses the sort of storytelling that Doctor Who would have previously spent episode after episode (or series after series, in the case of Amy and Rory) exploring into a couple of minutes. The show realises that we as an audience have seen enough to know that it's hard for the Companions to lead a secret life and to keep The Doctor from destroying their lives on Earth. Rather than belabor the point, it gets all of that out of the way before the credits have even rolled, though not before having The Doctor take a job as a caretaker at Clara's school in order to try and track down a killer robot named Skovox Blitzer who kind of looks like a more murderous version of the owl from Clash of the Titans.

Even though that aspect of the plot was all about saving the world - the robot has tremendous firepower and a deadly self-destruct mechanism - it was still treated as an almost incidental background detail to the main story, which was about The Doctor entering Clara's personal life and meeting Danny. Co-written by Moffat and Gareth Roberts, who also wrote the similarly character-and-comedy heavy Matt Smith episodes "The Lodger" and "Closing Time", "The Caretaker" was full of fun dialogue (including a strong continuation of the running gag of The Doctor thinking that Clara is old and/or frumpy: "How can  you think I'm her dad when we both look exactly the same age!?") and it explored the problem of someone trying to live a normal life while also traveling through space and time in a way that wasn't especially original, but it was fun.

The main benefit of having the the relationship between Danny and Clara pushed to the side in previous episodes is that the show was able to deal with all of those issues in one fell swoop. Even the expected revelation of Clara's double-life dispensed with any attempts to trick Danny further and had him witness something fantastical - The Doctor sending Skovox Blitzer through an inter dimensional portal - and almost instantly figure out and accept his new reality. He didn't grasp all the nuances immediately (he made the fairly reasonable assumption that Clara must also be an alien and that The Doctor must be her "Space Dad") but he got the gist of it. It seemed to be an acknowledgement on the part of Doctor Who that anyone watching the show at this point knows that these issues are going to come up, and so it was better to get them all out of the way in as quick and painless a manner as possible. In that, the episode was successful, since while it didn't do anything the show hasn't done before, at least it did it with a vigour and ruthless efficiency that felt refreshing.

The one sour note in the whole thing was the way that the episode handled The Doctor's antipathy towards Danny, and particularly his extreme dislike of his past life as a soldier. It's not that The Doctor shouldn't or couldn't hate soldiers considering how many times he's been used or double-crossed by military organisations, (and what are the Daleks and the Cybermen if not whole races built on mindless militaristic domination?) it's just that he's never really expressed such a blanket distrust of the military before. In the past he worked closely with U.N.I.T., he's willingly helped soldiers in need when necessary, and he even came to the rescue of a group of soldiers a mere four episodes ago. This anti-soldier sentiment feels like a prejudice that is being forced on to The Doctor to create conflict with Danny, rather than something which is immanent to his character. It also obscures one of the episode's best jokes, which is that The Doctor initially assumes that Clara is going out with Adrian, the English teacher who looks and acts much like The Eleventh Doctor. It feels like the rejection from that might be a good enough source for conflict between the two men in Clara's life, rather than suddenly deciding that The Doctor hates soldiers. It could still amount to something further down the road, but for now it rings false in the worst possible way.


- The shot of the policeman's charred hand after being vaporised by Skovox was surprisingly grisly. That's a great example of how to use shadow to suggest something horrible without actually having to show it (see also: the scene of Michael Pitt going to town on his own face in season two of Hannibal).

- I hope that Adam Sandler will option Space Dad as one of the four films in his deal with Netflix.

- We got a little more movement on the Missy subplot this week as the end of the episode revealed a bureaucrat (played by Peter Capaldi's former The Thick of It co-star Chris Addison) welcoming the aforementioned dead policeman to the heaven-type place that Missy oversees. I'm still not sure how I feel about the slow-burn the show is doing with this story, but I do like the way they seem to have modeled their vision of the afterlife on that in Powell and Pressburger's A Matter of Life and Death.
By Edwin Davies
Labels: Doctor Who, Jenna Coleman, Peter Capaldi, review, science fiction, television, television review
Newer Post Older Post Home