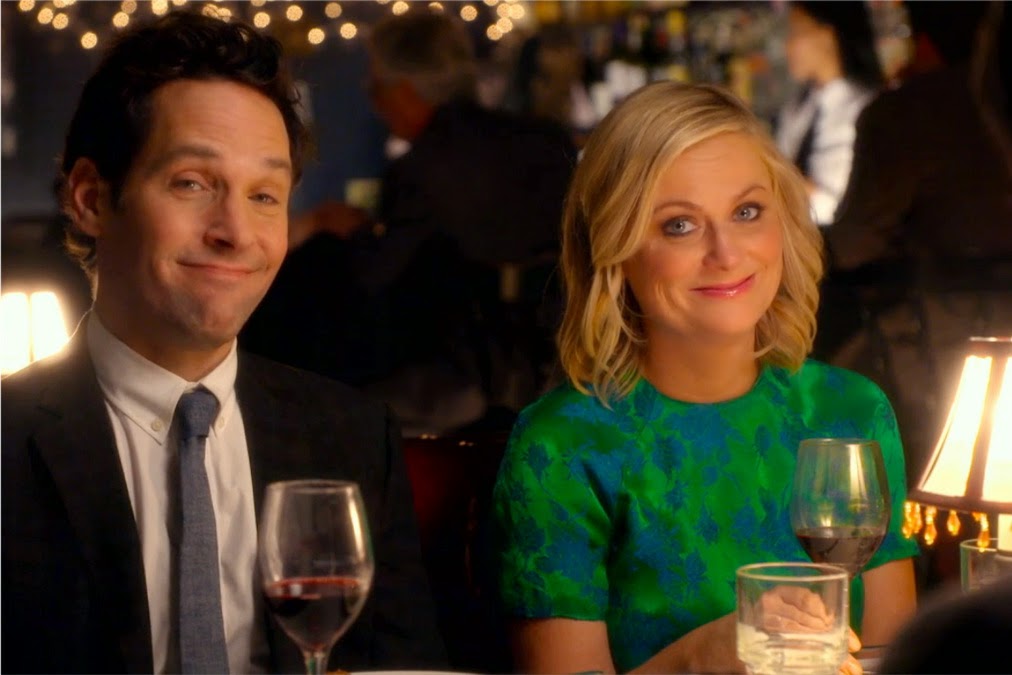 Molly (Amy Poehler) is a funny, smart, beautiful woman who just can't catch a break when it comes to love. Joel (Paul Rudd) is a funny, smart, non-threateningly handsome and just Jewish-looking enough man who discovers that his girlfriend (Cobie Smulders) is cheating on him at the very moment that he proposes to her. New York is a city in the North-Eastern part of the United States of America, and it's also a character in this film. They seem perfect for each other, except Molly owns a small candy shop and Joel works for a big candy corporation that plans to put her out of business. New York seems pretty indifferent to the whole thing, to be honest. Will their obvious chemistry and love of fiction books overcome their slight differences, possibly after a break-up at the end of Act Two and a near-miss wedding to a clearly unsuitable other person? If only there was an entire genre of formulaic movies that we could consult to get the answers!

They Came Together marks the second cinematic collaboration between director David Wain (Role Models, Wanderlust) and his former The State and Stella cohort Michael Showalter after their initially maligned, now cultishly adored comedy Wet Hot American Summer. Like that film, They Came Together is a parody of a specific genre, though this time they have trained their eye on the romantic comedy rather than the '80s summer camp movie. While their earlier film felt like an eccentrically playful riff on an oddly specific genre, this feels like a more openly antagonistic analysis of a much bigger, more pervasive kind of storytelling. Their script skewers the broad strokes of the genre pretty viciously - from the moment when Molly and Joel first meet and wind up hating each other to their first time sleeping together, and the inevitable breakup and reconciliation - and highlights how the same plot points crop up again and again in the films it is mocking, as well as how ridiculous or counterintuitive they might seem. Some of the film's reference points feel oddly dated - the idea of Molly and Joel working for opposing forces in the same industry draws heavily on You've Got Mail, while one montage seems inspired by Notting Hill - but in general it never gets tied to one specific film as a basis for its gags.

Instead, it uses the broad plot points of films like You've Got Mail to point out the tropes of the genre, then makes them almost painfully literal. Take, for example, the scene in which Joel plays basketball with four of his friends (played by Jason Mantzoukas, Kenan Thompson, Ken Marino and Jack McBrayer) and asks them for relationship advice. At this point they bluntly articulate the idea that supporting characters in romantic comedies represent the different approaches to relationships (never get attached, stay true to one person, be pragmatic, be poetic etc.) that the protagonist has to learn to balance in order to be happy. Or take the moment when Molly tells Joel where she would be likely to go if she ever decided to chicken out of marrying someone at the last minute, turning what would usually be fairly obvious foreshadowing into boldly stated intent.

That kind of literality would make the film merely diverting if that was all They Came Together had going for it. It would at the very least stand as a clever dissection of these specific conventions that smartly casts actors who could headline a typical rom-com in the lead roles, but the film goes further than that: As soon as Wain and Showalter point out a particular trope, they proceed to push it to whatever absurd lengths they can imagine. Molly and Joel's hostile first meeting takes place as they are on their way to a Halloween party when they are both dressed up as Benjamin Franklin. During a "getting to know you" montage that shows them playfully throwing leaves at each other, they run gaily off and ignore a dead body that their frolicking uncovered. When they first have sex, they are so overcome with passion that they knock over every object in Molly's apartment, even going out of their way to destroy things by, for example, picking up a vase and throwing it against a wall mid-kiss. This approach maintains a nice balance between Wain's odd specificity and Showalter's incisive understanding of genre conventions and semiotics, which he previously explored in his directorial debut, the more focused but less funny rom-com critique The Baxter.

But while the rom-com deconstruction that makes up much of the film is always interesting and often funny, the best jokes have almost nothing to do with that at all, and instead come from moments when the script gets digressive and plain weird. There's plenty of insightful dissection of how rigidly these films stick to a set structure, but none of that is as instinctively funny as the way that a lighthearted game of pass between Rudd and Mantzoukas takes a turn when the latter falls through a window and is left dangling for his life. And while the attention to detail in the presentation makes it a perfect facsimile of a brightly-lit, visually bland comedy, that's nothing compared to the way Wain drags out a circular conversation between Rudd and a bartender that consists of nothing but the same four phrases being repeated over and over again. They Came Together is often blisteringly funny, but at other times it feels like Wain and Showalter are constrained by their conceit, and that they could deliver a funnier film overall if they weren't also creating a work of criticism.

But the question of whether the film could be funnier is less important than whether it is funny enough to begin with. I think it absolutely is, at least in part because of the contrast between those gut busting laughs and the quieter, more thoughtful ones. It's an exercise in almost pure detachment that never once expects you to care about any of its characters, and that allows it the freedom to go on flights of fancy that range from slyly clever to completely insane, but having such a stereotypical and undeniably sturdy plot structure to fall back on means that it never descends into aimlessness. It's a short, sharp satire with an amazing cast, some brilliant jokes and enough cohesiveness to hold it together whilst still looking a little unhinged. It also manages to sneak in one of the most ludicrously acrobatic sex scenes since Team America, which has to count for something.