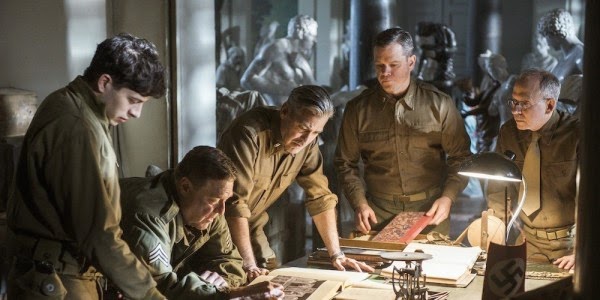 The core argument of The Monuments Men is one that is provocative in the abstract, though less than compelling as the driving force for a lavishly produced war drama. In telling the true story of art scholars who went to the European Front to find, identify and protect great works of art stolen by the Nazis, co-star, co-writer and director George Clooney reframes the conflict as not just being between conflicting ideologies. It was also a battle for history, and the Nazi effort to steal art - and, later in the war, to destroy it - was an attempt to rewrite the very history of the world. In that context, the efforts of the Monuments Men to protect the past seem important, even noble, rather than something flip or insubstantial when compared to the death happening around them.

Unfortunately, the execution rarely lives up to the film's lofty ideas. It's perpetually caught between being several different, diametrically opposed films. At times it's a serious, earnest meditation on the importance of art to civilization, but at others it's a jocular, light-hearted movie about men unsuited for warfare setting out on an adventure. It veers from slapstick peril to real horror as it tries to encompass the moments when, for example, James Granger (Matt Damon) steps on a land mine and the rest of his compatriots try to free him with a mix of architectural knowhow and bonhomie, as well as those in which the same character is confronted with the profound absence created by The Holocaust.

It's entirely possible to reconcile those disparate tones - the HBO miniseries Band of Brothers did an exceptional job mixing moments of humour with ones of abject horror - but George Clooney doesn't manage it. As evidenced by his collaborations with the Coen Brothers, Clooney can be a very winning comedic performer, but as a writer and director he has something of a tin ear for comedy. He presents the funny repartee between the characters with the exactly same respectful, sombre visual style that he uses when his character makes a heartfelt plea to FDR explaining why he should be allowed on to the front lines. The musical choices are also bizarre, with a tense showdown between Bob Balaban, Bill Murray and a scared German soldier being soundtracked by a positively wacky piccolo. While the film eventually settles down and adopts a well-meaning yet bland stoicism in its second half, its first pings between so many tones that it's almost impossible to determine what the film is trying to be from scene to scene.

That's also true for the film's narrative, which is by turns too quick and too languid in its progression. Despite putting The Monuments Men themselves together in a montage that lasts less than a minute (a problematic choice that prevents any of them from being characters rather than merely extensions of the men playing them), the first hour of the film feels like a formless series of vignettes; there's no real urgency to the story because the characters seem to be chasing a concept, rather than a concrete objective. Around the halfway point the focus shifts from a quest to save artworks in general to a race against time to save Michelangelo's "Madonna of Bruges", and Clooney and Grant Heslov's script makes that particular search personal to the characters, which certainly energises the proceedings and gives it a firm destination. However, the change is awkwardly noticeable, as is the frequent use of voiceover to add meaning or cohesion between events that don't really have much to do with each other.

What pleasures there are in the film lie primarily in the performances, particularly those given by Murray and Balaban. The script requires them to be a fairly derivative odd couple who don't like each other but gradually develop mutual respect, but they both give such deadpan and wry performances that it soon turns into a competition to see who can give the least expressive performance. I'd like to think there is an alternate universe in which the two of them starred in dozens of films together, becoming the Laurel and Hardy of aggressive understatement. They also benefit from being the performers furthest removed from the theoretical questions of the story, and as such don't have to give any monologues about the importance of art. These are peppered throughout the film, and they manage to be under-written and overstate the subtext of the film in a way that is annoyingly artless, coming as they do from the men who made the equally didactic, but infinitely more graceful, Good Night and Good Luck.

There is one scene that, thanks to the combination of a great, wordless turn by Murray, some judicious cross-cutting between several disparate yet complementary events, and the use of a particularly poignant rendition of "Have Yourself a Merry Little Christmas," makes for a moment that is genuinely beautiful and heartrending. Tellingly, it's one of the few scenes in the film that has nothing to do with trying to recover art, but is instead based in the emotional toll that the war has on the men involved. There's too few of these moments in the film, which otherwise strains to fit what feels like four or five hours worth of incident into just under two hours. The great flaw of The Monuments Men is that it ultimately values its ideas above the men who express them, which is thematically appropriate, but dramatically underwhelming.