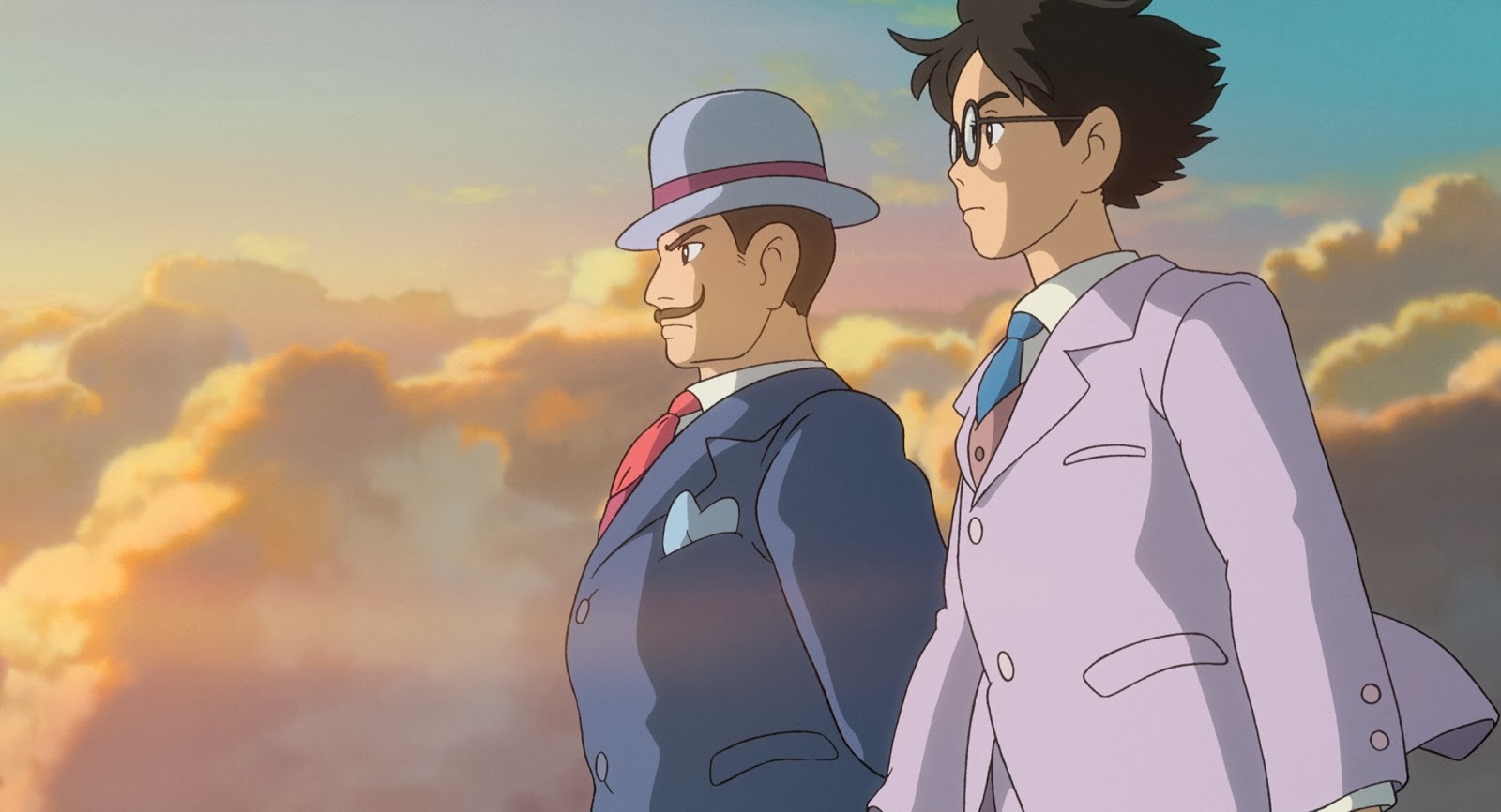 Flight has been a key factor in both the life and work of Hayao Miyazaki. In his films, flying represents freedom, hope, magic, and the sheer wonder of nature, but Miyazaki's family benefited financially from selling plane parts during World War Two, living in relative comfort as a direct result of the Japanese war effort. This experience seems to have given Miyazaki a very dim view of war, as seen in films like Nausicaa Valley of the Wind and Howl's Moving Castle, but it's especially germane to The Wind Rises: In telling a highly fictionalised account of the life of aircraft engineer Jiro Horikoshi (voiced by Joseph Gordon-Levitt in the English-language dub) it directly addresses the life of someone who achieved success and renown for designing weapons of war, as well as the tension that exists between conscience and the desire to create something beautiful. Despite its basis in real history, The Wind Rises feels like Miyazaki's version of The Tempest; a fantastical, oblique yet deeply personal work about the craft of its creator.

Last year Miyazaki said that The Wind Rises would be his final film, and while this is at least the third time he has 'retired' from filmmaking in the last twenty years, and this has led some to doubt whether or not he plans to go through with it (doubts which have not been assuaged by reports that he's now started work on a manga) the film certainly feels like a final statement. Much like Akira Kurosawa's Madadayo, The Wind Rises weaves together the life of a historical figure with that of its author, creating a story which delves into a director's worldview, while also being universal enough to address huge questions about what it means to be an artist and the cost of creativity.

The way in which Jiro, a young man who only wants to create elegant planes, has to pursue that passion by working for the Japanese war effort is not directly addressed by the film, which has led some to suggest that the film is an apologia for Japan's actions during the war (and which would be a valid argument if you ignored every film Miyazaki has made prior to this one). However, it is addressed early and often, in ways both overt and subtle. There's a series of recurring dream sequences in which Jiro meets the great Italian engineer Caproni (Stanley Tucci) and is shown glimpses of the sort of massive planes that he is working on, both for civilian and military purposes, and in which Jiro experiments with his own, ideal designs. In terms of the accusations that the film is in some way pro-war, it's telling that his image of a perfect plane is one with clear surfaces and no capacity for violence.

Pretty much the first conversation they have is one in which Caproni expresses regret over how many young men will die as a result of his work, and their subsequent discussions all draw upon the idea that no amount of artistic merit can separate the beauty of their work from the damage that it will cause. These scenes are heavily reminiscent of Miyazaki's very funny yet deeply sceptical anti-war film Porco Rosso, both in their playful tone and in how they equate pilots flying into the sky with souls departing for the afterlife. (Apart from the crisp digital colouring, the image of a sky filled with nothing but distant, spectral planes could easily have been dropped straight in from the earlier film.) Like the best of his films, The Wind Rises seems deeply suspicious about the potential of technology to create havoc, yet in awe of the wonders it can produce (a dichotomy that the films extends to nature, which is depicted as wondrous, even as an earthquake pretty much levels Tokyo in the first reel). That carries over into the visuals of the film, which are typically stunning and expressive in the way that only hand-drawn animation can be; Miyazaki and his animators make planes and their movements joyous to watch without losing sight of the destruction that they can inflict.

Where the film most fully and devastatingly explores the personal cost of being an artist is in its depiction of the budding relationship between Jiro and Nahoko (Emily Blunt), a young girl who he helps during the aforementioned earthquake, and who reappears once he has established his reputation as a brilliant designer. As the two become closer, Jiro's work becomes more and more demanding, and he has to spend more and more time away from Nahoko, even as she struggles with tuberculosis. This recalls the mother's illness in My Neighbour Totoro, which was in turn based on Miyazaki's memories of his own mother battling TB when he was a young child, suggesting a deeply personal connection between this central relationship and his own life. My own personal interpretation was that it was Miyazaki examining his notoriously strained relationship with his son Goro, though it could apply to anyone in his life who he had to ignore in order to create the films that have made him such a legendary figure.

The way that Jiro is torn between his urge to create and the love of his life is a great and aching tragedy at the heart of the film, not merely because it's a story of two young people having to deal with a potentially fatal illness, but also because he spends less time with her in order to help build better killing machines. It's one of the more fully realised romances in Miyazaki's oeuvre, and it lends a real poignancy and structure to a story that at times has the same awkward, lurching quality that made Howl's Moving Castle difficult to engage with on a first viewing. (Though, like Howl's, The Wind Rises only gets richer upon reflection, and once you get away from the occasionally rusty mechanisms of the plot.) It's a film concerned with ephemeral, elemental questions about art which ties them to a sad personal relationship, to often devastating effect. It's an occasionally perplexing final statement, but an unforgettable one, and a haunting final bow from a true master.