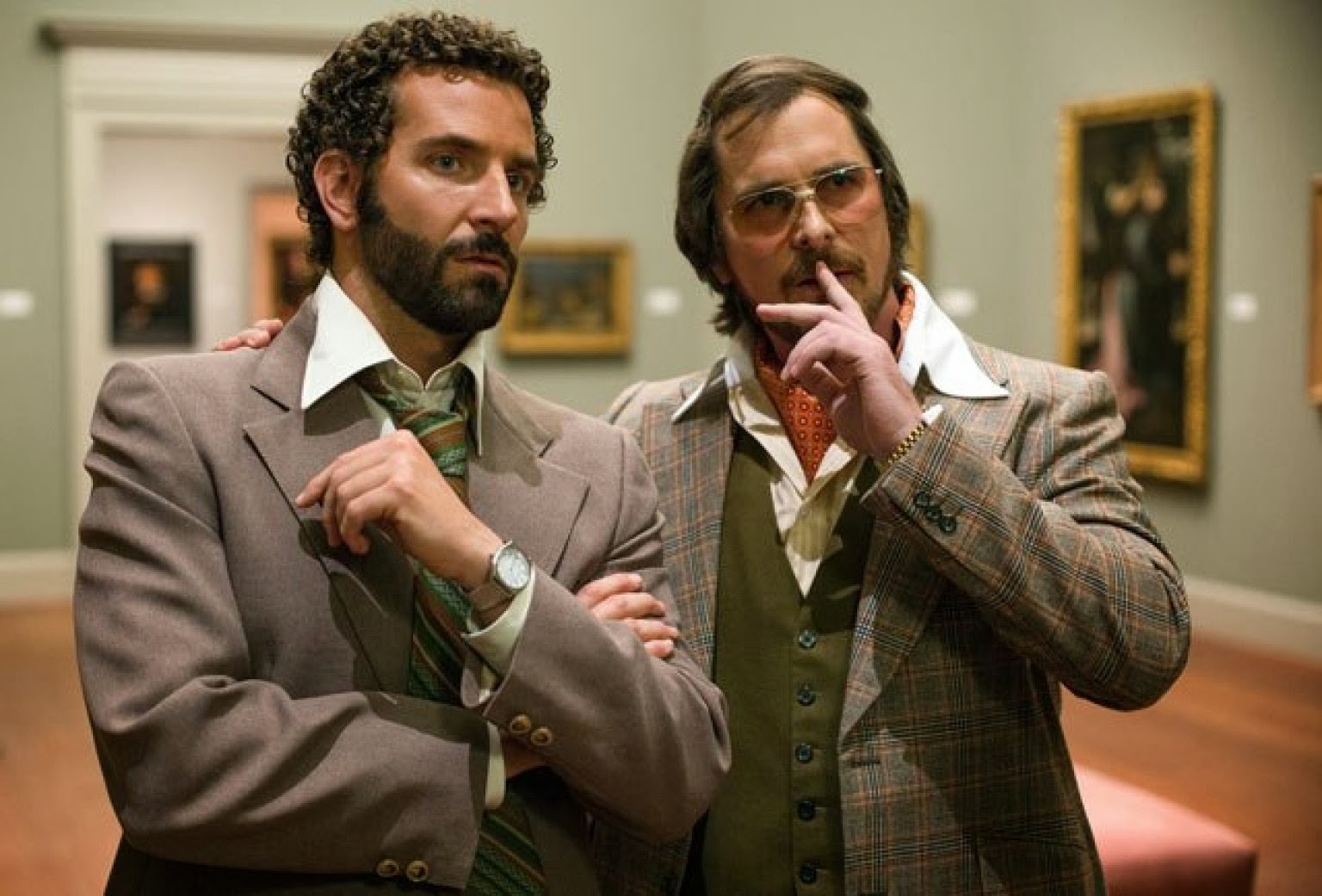 There's a scene in David O. Russell's previous film, Silver Linings Playbook, in which all the major figures in Pat Solitano's (Bradley Cooper) life finally collide in one room. His feisty dance partner/love interest, his parents and one of his best friends are all thrown together so that they can hash out their differences, and gradually reach a point from which they can progress to the finale. It's a crucial scene, one that shuffles all the different relationships and fundamentally changes the stakes of the story, but it's also the worst scene in the entire movie; it lacks any particular focus, and feels like the early stages of an improv session in which the actors are trying to find their way to a conclusion. It has plenty of energy, but it's energy that is being fired off in every direction at once.

The reason I bring that particular scene up is that Russell's latest, American Hustle, feels like that scene stretched out to feature length. In telling the story of the Abscam scandal - a sting operation in which the FBI used a convicted con artist to help ensnare politicians using a fake Sheikh scam - Russell and his immensely talented cast imbue the film with tremendous energy, none of which seems to be focused in any one direction. From scene to scene - and sometimes even within individual scenes - the film veers unpredictably from broad comedy to intense character study, or from moments of quiet reflection to ones of "This is definitely set in the '70s!" outrageousness. The end result is a story which is often very entertaining, and which certainly moves along at an incredibly brisk pace, but which is pretty incoherent when it comes to dealing with its characters, themes and general tone.

Barely preventing the film from spinning so fast that it lifts off and flies away entirely is Christian Bale as Irving Rosenfeld, the con man who, along with his girlfriend Sydney (Amy Adams), is coerced into planning and executing the ploy by FBI agent Richie Di Maso (Cooper) when they are caught red-handed in the middle of another con. With his protruding gut and complicated combover, Irving strikes a slightly ridiculous figure, but Bale exudes so much confidence in the role that it's easy to buy him as someone who could not only convince people to hand over large sums of money to him, but one who could seduce someone like Sydney. Some of the best scenes in the film are ones of Irving trying to convince people that he has their best interests at heart, and Bale displays an easy charm that is equally as convincing as the desperation he feels whenever he tries to get out of the mess he has landed in.

One of the main problems with the film from a narrative point of view is that it sometimes forgets who its main character is; Irving offers the audience a look into the mechanics of the confidence game, and he narrates a great chunk of the story, but voiceover duties are shared by pretty much the entirety of the main cast at one point or another. It keeps the audience on their toes, and contributes greatly to the relentless, shotgun blast energy of the film, but without a central figure to hang the entire story on, it winds up feeling very lumpy and crowded. The experience is akin to someone skipping randomly between four different Martin Scorsese movies; you get pieces of a story and snippets of characters, but not enough of either to really satisfy.

However, when the movie focuses on Bale, it's the best version of itself, especially as he struggles to balance all the competing demands being put upon him. Not only does he have to figure out a way to get out from under Di Maso and not lose Sydney, who says that she is going to work her own con by tricking Di Maso into falling in love with her, he also has to worry about his young wife (Jennifer Lawrence), who is basically a sentient tornado that threatens to destroy everything around her. Bale is great at playing someone struggling under constant pressure, and the tension that arises between Irving and Sydney as the latter goes deeper and deeper into her seduction of Di Maso is genuinely riveting. The only moments when the film's lack of focus works in its favour are those where it's not clear who is conning who, or which characters truly care for each other, and the relationships between Irving and Sydney and Sydney and Di Maso are a big part of that.

Lawrence, meanwhile, seems pretty badly miscast, considering she is meant to be someone with a young child and hints at a string of failed relationships, but she's tremendously game and wrings a great deal of comedy out of her smattering of scenes, particularly when she gets to interact with the futuristic technology that is a microwave. She's only really used well when she has to interact with Bale, and the scenes in which she is on her own tend to flounder around until an opportunity arises for the film to rope her into the main plot again.

That's emblematic of American Hustle's broader issues; whenever it moves away from the specifics of the con, it splinters into several other movies. Those other movies can be very entertaining - Cooper's scenes with his boss, played by a straight faced Louis C.K., are uproariously funny and make for one of the least likely double acts in movie history - but the individual pieces never seem to fit together. Even the resolution to the story feels slightly off, not because it's unbelievable or comes out of nowhere, but because the film so often feels distracted that the resolution to the plot almost feels like Russell and his co-writer Eric Warren Singer only remembered what story they were meant to be telling at the last minute.

Fitfully hilarious and buoyed by a strong cast, American Hustle is a movie that is constantly firing on all cylinders, but it feels like the engine has been put in the wrong car. Wildly inconsistent and with no real centre to orientate its loopier tendencies, it's ultimately a collection of interesting scenes that don't amount to very much.