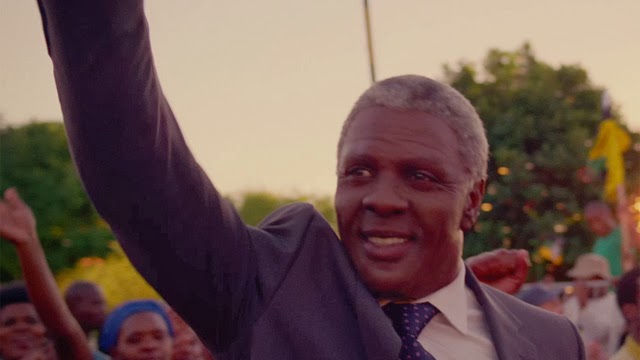 Less a film than a Wikipedia article come to life, Justin Chadwick's Mandela: Long Walk to Freedom suffers from the same problem that afflicts pretty much all biopics: the impossibility of condensing an entire lifetime into a few hours in a way which doesn't feel stodgy or reductive. There are exceptions, as in all things, such as Anton Corbijn's Control, about the life of Ian Curtis, where the subject lived such a short life that you can cover most everything yet still give the key points plenty of time and consideration. However, in most cases choosing to cover the entirety of a human life ends up making things seem rushed, harming it as both a work of drama and historical record.

This is doubly, even triply true of someone like Nelson Mandela, a man whose life and legacy are so colossal that one film, even a fairly long one like Long Walk to Freedom, feels like nowhere near enough. It does a decent job of hitting all the key points; beginning with Mandela's (Idris Elba) boyhood, going through his political awakening as a young lawyer, his growing radicalisation and becoming a key leader of the African National Congress, through his 27 years in prison for his fight against Apartheid, all the way up to his eventual release and election as South Africa's first black President. As something that will soon be played in classrooms the world over, it effectively conveys a lot of information in a digestible way.

As far as overviews go, it's solidly made and moves along nicely from beat to beat, but what it often lacks is context. It has to cover so much time that it breezes past the political realities of life in South Africa, and while it manages to capture the visceral and emotional impact of something like the Sharpeville Massacre or the outbreaks of violence that preceded the 1994 election, the film doesn't provide much of a framework within which to understand them, and when it does it feels awkward and expository. The need to tell a dramatic story often gets in the way of the history, while the need to retell history hurts the drama.

This is the key difference between a dramatisation and a documentary, since Long Walk to Freedom can't break the reality of its storytelling to fill in the gaps in the way that Angus Gibson and Jo Menell's documentary Mandela did in 1996. In some ways, Long Walk to Freedom feels like a more emotional counterpart to the earlier film, since both follow the same chronology and cover essentially the same events, but one tries to explain what life was like in South Africa and what Mandela meant as a politician and a leader, while the other tries to recreate what life in South Africa felt like and who Mandela was as a man.

Unfortunately, Long Walk to Freedom sprints through Mandela's life story so quickly that most of its relationships and characters feel underdeveloped, so it's hard to get too emotionally invested in most of the events it depicts. Apart from Mandela himself, who is played with wit and considerable charm by Elba, who's so good that he just about overcomes the fact that doesn't look a damn thing like Mandela (bizarrely, he looks even less like him the more they layer on makeup and prosthetics designed to improve the likeness), and his second wife Winnie, played by Naomie Harris (who never really overcomes the fact she doesn't look like Winnie because there seems to be no attempt made to age her) every character in the film feels slight and insubstantial. There are moments when the film works emotionally, such as a scene in which Mandela sees his daughter for the first time in a decade, but these often work because the actors are good in the moment, not because the relationship has been well established or because the film has earned its sentiment. The idea of a man seeing that his daughter has grown from a child to a young woman without experiencing the in between years is inherently moving, but it's one that is largely divorced from Long Walk to Freedom itself, which never decides whether it is an exploration of Mandela as a man, or as a political icon.

It certainly seems committed to trying to depict Mandela as "not a saint, unless you think of a saint as a sinner who keeps on trying" by showing how he abandoned his first wife and young family, and by not shying away from the violent tactics the ANC employed once it became apparent that there were no political avenues left for them to explore in the face of overwhelming oppression, but it never delves deeply enough into who Mandela was as a person to really feel illuminating. It definitely puts across a sense that he was important, and that he was a funny, intelligent and politically astute leader who achieved a great deal, but the whys of his life prove much more illusive than the hows.

Despite a thoroughly winning and charming performance from Idris Elba and some genuinely lovely location shooting, Mandela: Long Walk to Freedom is too scattered to work as anything other than a primer to a great, important and interesting life. It's easy to imagine each of the individual events in Mandela's life being made into films in their own right. It certainly feels like a compelling, Lincoln-esque drama, one with limited scope but great attention to minutiae, could have been made about the back room deals that were made to secure Mandela's release, or the ideological and emotional distance that grew between him and Winnie while he was in prison, or even just a dramatisation of the court case that put him away in the first place. Instead, you have a film which tries to cover all of these things, and by trying to capture the big picture it lets the interesting, smaller details slip through its fingers. It never loses the power of Mandela's story or the beauty of his words, but it fails to make a case for why they were important in the first place.