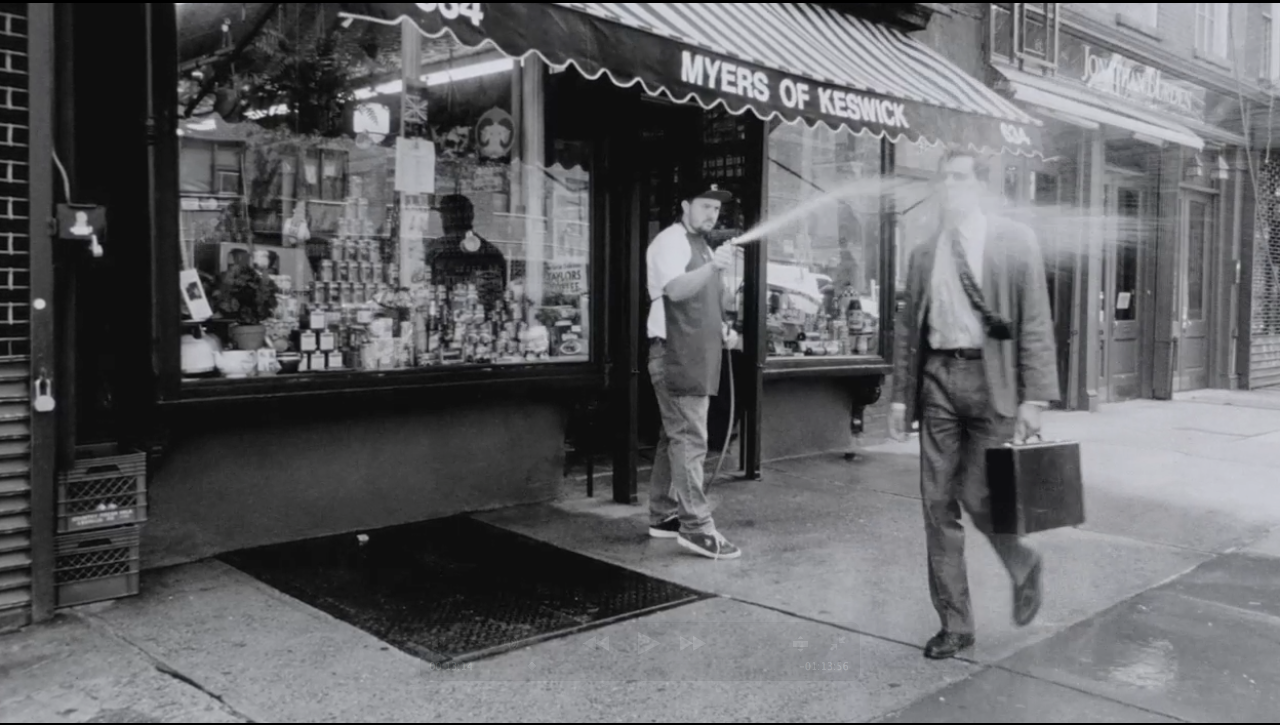 For many years, Tomorrow Night existed as little more than an IMDb entry: a curio that, despite featuring a lot of people who would go on to be very successful and fairly famous, had been seen by basically no one. Though the debut feature of writer, stand-up comedian and filmmaker Louis C.K. played at several film festivals in 1998 and received fairly decent notices, it failed to pick up distribution and remained squirreled away in C.K.'s personal collection, with not even a scant trace of the film existing online. In an age where seemingly everything is available to us somewhere, Tomorrow Night remained stubbornly out of reach.

In the years since it last saw the light of day, C.K. has gone from a struggling comic and television writer who occasionally made short films to become one of the most acclaimed comedians of his generation; a rare example of a comics' comic who broke through to the mainstream. On top of that, he has received plenty of acclaim for writing, directing, editing and starring in the F.X. series Louie, a deeply idiosyncratic show in which he explores his various neuroses through a mixture of acerbic observational comedy and what can best be described as "mundane surrealism"; taking things that could theoretically happen but are extremely unlikely to - such as men in a van kidnapping a homeless person then replacing them with a nearly identical homeless person, or having a date go so horribly that Louis/Louie's love interest runs straight for a waiting helicopter and flies away - and treating them in a deadpan style that heightens the absurdity while also making them feel earthy.

The style of Louie is unique, and one that could only come from someone with a distinct vision, but considering that it bears very little resemblance to C.K.'s only other feature to date, 2001's gleefully silly blaxploitation riff Pootie Tang, and shows an ambition that was only hinted at by his earlier short films, Tomorrow Night increasingly seemed like a lost piece of a puzzle. As a labour of love that C.K. funded using his savings, augmented by loans from friends like Jon Stewart, the film seemed like it might offer a glimpse into C.K.'s emerging style. While it might not explain how he became the filmmaker that he has, it could at the very least demonstrate what he might come up with if freed from the studio interference he experienced on Pootie Tang, or the anthology-like style of his television work. Now that C.K. has put the film up for sale on his own website, the opportunity to see it has finally arrived.

The first thing that needs to be said about Tomorrow Night is that it's probably best enjoyed by people who are already familiar with C.K.'s work. That's not to say that it's a for fans only proposition, though it does feel like that at times, but it is incredibly odd, and often feels more funny, peculiar than funny, ha ha. Anyone who's watched a few episodes of Louie will be able to key into the film's tone, which is both heightened - thanks to C.K.'s habit of writing deliberately artificial and obtuse dialogue, as well as the at times severe black and white cinematography - and surprisingly low-key. On the one hand, you have the realistic awkwardness experienced when the main character, a relentlessly mean photo-shop (ah, the '90s, when regular people still got photos developed) owner named Charles (Chuck Sklar, who bears a frankly eerie resemblance to Barton Fink-era John Turturro) tells a man (comedian Todd Barry) that he can't hang out in his store to keep out of the rain. On the other, you have repeated scenes in which Charles, seemingly as a way of suppressing his sexual desire, pulls down his trousers and lowers his loins into a large bowl full of ice cream.

While the contrast between those two styles - fairly naturalistic human interactions (many of which involve comedian and future Curb Your Enthusiasm MVP J.B. Smoove as a mailman who tries to befriend Charles) and flights of fancy - will be familiar to fans of Louie (even if the fairly low budget means that Tomorrow Night can't try anything especially bold or ostentatious, like flying to China for a bit) they don't gel as well here as they would in C.K.'s later work. It feels very raw and unfocused, especially in the early stages, as the film jumps from Charles' attempts to get people to pick up their photos to the story of Florence (Martha Greenhouse) and her relationship with her abusive husband (Joseph Dolphin, giving one of the most insane performances I've ever seen) to Florence's son, Willie (Greg Hohn) and his dawning realisation that two of his fellow soldiers in the Army (Steve Carell and Robert Smigel) have been throwing away his letters for 20 years.

As these plotlines gradually intersect, the film develops more momentum, but it still feels pretty sluggish and is only fitfully funny. The Carell-Smigel scenes are probably the highlight, if only for the way that Carell plays his character as someone who can't hide his laughter from the man he's been playing such a remorselessly cruel prank on. The rest of the film is hardly terrible, it's just not laugh out loud funny. Then again, it doesn't feel like it's trying to be a straightforward comedy, so much as an excursion through a dark, heightened world. Its deadpan tone, coupled with the rich, harsh photography by C.K.'s longtime cinematographer Paul Koestner (there are even some exterior scenes where the use of natural light is so strong that it pretty much wipes out the whole image) and D.I.Y. slightly amateurish quality very strongly recall other low-budget debuts like Darren Aronofsky's Pi (which came out the same year, though Tomorrow Night was shot first) or David Lynch's Eraserhead, but with a fuzzier central narrative and weaker characterisation upon which to hang its oddness. (If nothing else, Tomorrow Night provides a pretty clear indication of why C.K. wanted Lynch to appear in a recurring role on Louie's third season; he's clearly a big influence.)

The main knock against Tomorrow Night, certainly in comparison to the work that came later, is that it feels very cold and distant. Now, Louie is an oftentimes bleak and cruel show, certainly in the way it treats both its central character and the people around him, but because it's anchored by C.K., who's a fairly likable everyman who seems bewildered by everything around him, and because it incorporates his stand-up into the narrative and gives a personal voice to the themes of the show, it helps to smooth down some of the sharper edges. (C.K. does appear in Tomorrow Night, though only briefly, as a man using a hose to spray the street outside his store, as well as passersby such as a very young Amy Poehler.) Louie can still be pretty brutal, but you at least sympathise with its central figure. Sklar, meanwhile, is so (intentionally) abrasive and closed-off that he heightens the creepiness and meanness of the world around him, which makes it feel very mean-spirited.

In the end, Tomorrow Night winds up feeling like a series of arbitrary, off-kilter events which happen to a collection of grotesques. That'd be fine if the film itself was, on average, pretty funny, and while it does have some moments that are really, really amusing, it lacks either the comedic consistency or the genuine warmth to get away with how weird and off-putting a lot of it is. It's not a bad film, but it is an inconsistent one that shows great promise. It's very fortunate that we can see it now, knowing that so much of that promise was actually fulfilled.