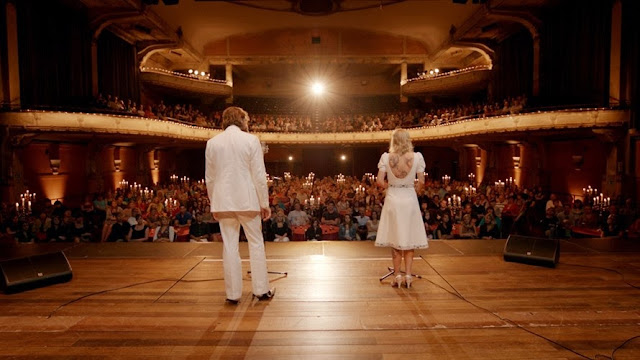 For about half its running time, the Belgian musical drama The Broken Circle Breakdown manages to achieve a fine balance between vibrant, sensual romanticism, swooning musical numbers and heartrending drama. In telling the story of Elise (Veerie Baetens) and Didier (Johan Heidenbergh, who also co-wrote the original play upon which the film is based), a couple whose young daughter is battling cancer, director Felix Van Groeningen uses a non-linear approach to cut between different stages of their relationship. This makes for some startling juxtapositions, taking us from their current heartbreak in a hospital to the first time they slept together and everywhere in between, contrasting the hope and lust of their early days to their present circumstances to often devastating effect. The scenes of their blooming relationship are handled with a light touch that is infectious, and makes the scenes of them holding it together for their little girl almost unbearably poignant.

Enhancing this effect is the inclusion of musical numbers performed by the bluegrass band that both Elise and Didier belong to. They're very intimate moments that use the inherent sadness and religiosity of American folk songs, with their universal expressions of love and pain, to comment upon the much more personal experiences of the couple. The Broken Circle Breakdown is, for the most part, a fairly naturalistic film, but the use of music is incredibly expressionistic and effective, rendering small, tender emotions grand and enveloping, allowing the film to embrace big sentiments without sacrificing the intimacy of its actors. At least, it does for its first half.

Once the film moves into its second hour, however, the wheels start to come off very quickly. The performances become bigger and less nuanced, the musical performances begin to look like padding, and the non-linear editing starts to look less like a clever means of exploring a relationship and more like a hack way of making the film look interesting without really trying (a sense that is further compounded by a truly laughable sequence in which a character's mental state is illuminated by the use of video effects that even the most pretentious film students would scoff at). Everything that the film does well sours and turns in on itself, taking it from an intriguing exploration of love and grief into a joyless slog.

Worst of all, the film makes one of its more subtle themes, the conflict between Didier's atheism and Elise's quiet Christianity, its focal point. This is a potentially very rich vein to explore, and the screenplay does a nice job of weaving it into the fabric of the broader story in the early going, but the film fluffs it so badly that it never recovers. Its idea of a discussion of ideas ultimately amounts to Didier screaming about the evils of religion to everyone who will listen and Elise shrinking from him until she can't take anymore. It may be that this is some sort of meta-commentary on the nature of the debate between science and religion, but I don't think that's the case. Even if it is, it's such a boring take on the subject that offers absolutely nothing of value whatsoever. Rather than actually engage with the tension between the two sides, it devolves into a shouting match that only worsens the film's descent into rote grief porn.

There is an incredibly powerful and interesting film in The Broken Circle Breakdown, one about love, loss, family, belief and the power of music. Unfortunately, it's grafted onto an utter dirge of a film that explores those same themes with the subtlety and nuance of a drum solo. It ultimately plays out like a slicker, less charming version of Once, with some hectoring about religion thrown in for good measure. A missed opportunity of heartbreaking proportions.