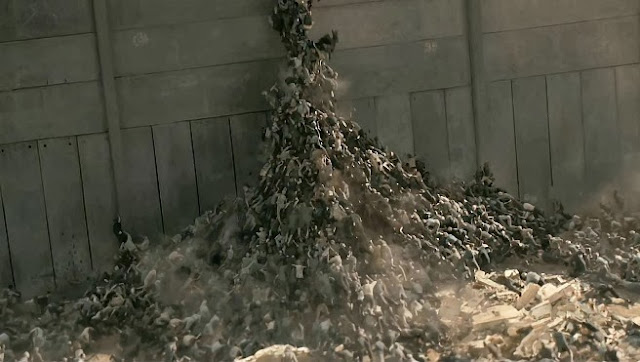 It's a Golden Age of the Undead these days, and of the hundreds of different zombie stories that have emerged in recent years, Max Brooks' novel World War Z stands out as one of the more ambitious. Using an epistolary style that retells a zombie apocalypse that has already happens, Brooks wrote a book which owed as much to Studs Terkel's The Good War or Haruki Murakami's Underground as it did Romero's Night of the Living Dead. By presenting the end of the world in the past tense, the book managed to be both exciting, inventive and, at times, oddly moving. It was not just a terrific zombie story, but a terrific book regardless of genre.

Unfortunately, the very qualities that made the book so special - its huge selection of disparate characters, its often relentlessly bleak tone and its non-linear structure - made it incredibly difficult to adapt as a straightforward narrative feature in anything resembling a faithful manner. (And even if someone were to adapt it faithfully, it would probably look more like Ken Burns' The Civil War or Claude Lanzmann's Shoah than a blockbuster.) As such, the film version of World War Z bears little resemblance to its source material other than a name and the fact that both deal with a zombie apocalypse. While this approach might do a disservice to the book, it was probably the only one that could deliver anything resembling a coherent experience.

At the centre of that experience is Gerry Lane (Brad Pitt), a man who used to work for the United Nations but quit in order to spend more time with his wife (Mireille Enos) and two daughters. It's while traveling with his family that Gerry finds himself in the heart of a zombie outbreak that forces them to flee for their lives, and ultimately sends him on a globe-trotting search for whatever caused the dead to start coming back to life. Gerry's hope, and the hope of all humanity, lies in the question of whether finding the cause will also yield a cure.

Though the story is ultimately a lot more narrow than that of the book, what the film of World War Z gets across is the sheer scale of the disaster being faced by humanity. Though the film rarely leaves Gerry, there is a nice sense of complete dissolution which we either play witness to - such as the first attack, in which the Lanes are forced to flee through gridlocked traffic and panicked crowds in Philadelphia - or through what we hear from other characters. Scenes set within the command centre of the United Nations offer brief, potent snapshots of how quickly the world has begun to collapse, with a death toll in the billions and governments scrambling to think how to tackle the problem. The script often tells when it could show, but it does a good job of putting across how fucked up things become in a very short space of time.

Bringing World War Z to the big screen was understandable difficult, and the turbulent production of the film has been covered in such detail elsewhere that it doesn't warrant being raked over again, especially because difficulty of making a film often has relatively little bearing on its final quality. There are plenty of great films which had troubled productions, and plenty of terrible films which had relatively smooth rides. However, the problems director Marc Forster and the writers, Michael Matthew Carnahan, Drew Goddard and Damon Lindelof, experienced in trying to wrangle the story had a direct and unmistakeable effect on the story; they resulted in the final act being completely thrown out and rewritten, giving it one of the odder tonal shifts of any blockbuster in recent memory.

The standard model for big summer action movies is to follow a path of escalation; small events lead to larger events, which lead to even larger events, and ultimately culminate in some big climactic showdown. That escalation may build slowly over the course of the story, or it may happen rapidly, but the rule of thumb is that once a film's scope has increased and the stakes have been raised, it shouldn't then be scaled back. World War Z is a rare exception to that format, though it does stick to it closely for its first two-thirds. It starts small, with Jerry and his family being pursued through the streets of Philadelphia, holing up with another family while they await rescue, then making a mad dash through the corridors of a tower block. From there, it gets gradually bigger once Jerry starts searching for Patient Zero. This results in a huge set piece in which a wave of zombies - and they do move in waves, with the momentum of the undead at the back carrying the ones in front inexorably forward until they crash against things - scrabble over a huge wall in Israel, overrunning a city in minutes and forcing Jerry to flee the country.

After that set piece, though, the film suddenly contracts its scale markedly, going from an action epic to an intimate game of cat and mouse. After a claustrophobic sequence in which Jerry and other survivors get trapped on a plane with a zombie, which inevitably causes the plane to be full of zombies - if nothing else, the film makes great use of tight spaces to amplify the danger of its shambling antagonists - Jerry winds up at a World Health Organisation lab in, of all places, Cardiff, Wales. Once there, he has to travel through infested parts of the building in order to test out a theory he has that could help humanity fight back against the zombie plague.

This ending, while fairly tense in isolation, also gives the film a terribly disjointed feeling. The whole film has constructed a certain image of zombies as pack animals that are incredibly dangerous and insatiable hunters, but ones which are mainly dangerous because of their sheer numbers. When the film whittles down its enemies to just a handful, it makes them dangerous in a way which is conceptually very different. It has to make individual zombies seem as scary as whole hordes, and it's hard to be impressed by such a small number of them after seeing literally thousands of them tear a city to pieces. The ending feels like it has been dropped in from a better, smarter movie than the largely bloodless spectacle that precedes, but it's for that same reason that it seems so wildly ill-fitting.

While no individual parts of World War Z are especially bad, the combination of them is so weird and off-putting that it's more Frankenstein's monster than zombie. The action sequences are impressive, if a little bland, while the quieter, tenser moments only serve to highlight how empty the middle act of the film is. It's fitfully enjoyable as an action film and fairly scary when it wants to be a horror film, but it never fully convinces as either when it tries to be both. There are two perfectly serviceable movies in World War Z, but they just don't go together especially well.