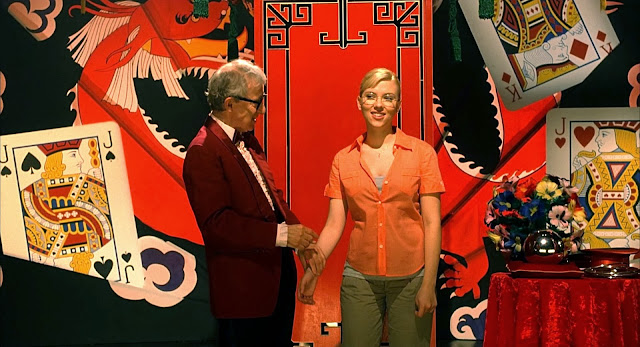 Having decamped to London for Match Point and seemingly revitalised his creative juices, Woody Allen could easily have decided to mine the same somber thriller territory for all that it was worth. Ever driven by his distracted, digressive muse, he instead returned to doing exactly the same kind of strained comedy that he'd struggled with since 2000, the only noticeable difference being that the actors and accents had changed.

In Scoop, a pretty middling film whose greatest crime is stealing the title of a truly great novel, Ian McShane plays Joe Strombel, a journalist who dies suddenly and finds himself in the afterlife sitting next to a young woman who claims to have been murdered by her employer. That employer is Peter Lyman (Hugh Jackman), a wealthy aristocrat who may or may not be the Tarot Card Killer, a nefarious murderer who has been killing young women all over London. Never one to miss out on a story, Lyman returns to Earth and appears to Sondra Pransky (Scarlett Johansson), a journalism student who at that moment is participating in a magic trick being practiced by "The Great Splendini," a.k.a. Sid Waterman (Allen). Sondra and Sid set about investigating Lyman by claiming to be a wealthy father and daughter and infiltrating his social circle, attempting to keep their ruse up long enough to figure out if the charming, affable Lyman could truly be a vicious murderer.

While nowhere near as bad as The Curse of the Jade Scorpion or Hollywood Ending, largely because Allen continued to cast himself in a supporting role so he could be funny around the margins, leaving other actors to shoulder most of the heavy lifting, Scoop does suffer from a lack of real focus or drive that makes it hard to care about what's going on at any single point. Johansson and Jackman make for a fun pairing, even if they do at times struggle to make Allen's dialogue sound anything other than stilted, but their emotional investment in each other is treated pretty offhandedly, making the question of whether or not they should end up together a non-starter.

The same is true of the mystery element, which in some ways recalls Manhattan Murder Mystery without being either as funny or tense as that earlier film. Allen has some fun with the idea of two people investigating a very serious allegation despite being wholly unprepared or suited for that kind of work, and he seems to have put some serious thought into making sure that the investigation works as a piece of point A to point B plotting, but it's treated so perfunctorily that it almost never rises above diverting. Considering how well he pulled the same The Thin Man riff before only serves to make his second attempt seem all the weaker.

Scoop is such a trifle that it's hard to muster up much concern about anything that happens in it, with the notable exception of the ending, which is horribly mishandled. Allen's prodigious work rate is truly impressive, but his need to make a film a year sometimes results in scripts which are half-baked and probably could have done with another three or four passes before the cameras started rolling. Scoop is a textbook example of this, since the mystery and relationship halves of the film are resolved in a very busy, scattered five minutes that ends everything in the messiest, silliest way possible, resulting in a finale that is less of a bang than an apathetic shrug. It wouldn't matter so much if the rest of the film was worth caring about, but ultimately it just serves to highlight how limp everything else is.

That's not to say that the film has nothing to recommend it; Allen gives a pretty funny performance and seems to delight in the moments when he has to put one over on people, McShane's limited contributions are ripe and gleeful, and the deliberately artificial and stage-like vision of the afterlife has a creaky charm to it. It also recalls some of Allen's more whimsical comedies, as well as his great short story "The Kugelmass Episode." However, most of what is enjoyable about Scoop is so minor and peripheral that it can't disguise that it's a romantic comedy built around a murder mystery in which the central relationship is uninteresting and the mystery is dull.