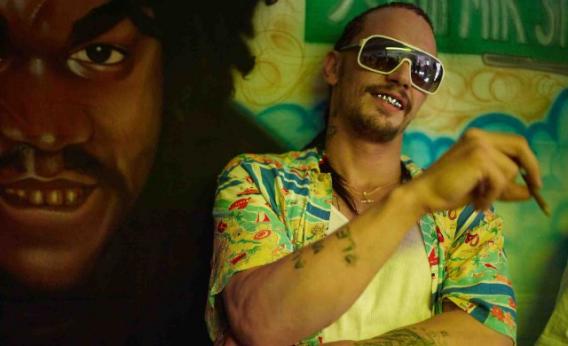 One of the strengths of genre film making is that it provides ample opportunity for intelligent writers and directors to secret social, political and cultural commentary beneath the more visceral, lizard brain pleasures of horror, sex and violence. The appeal is easy to see: you can make an insightful, even subversive point without the audience feeling like they are being beaten over the head with an ideology, while still making a film which is actually fun to watch. It's a tricky bit of misdirection to master, but it's largely why the likes of Invasion of the Body Snatchers, Society and Shock Corridor remain so fascinating decades after they were initially released.

Harmony Korine's Spring Breakers falls very much in that B-movie tradition, though the balance between commentary and titillation is geared more towards the latter than the former. On the surface, it looks like a "Girls Gone Wild" video, one with a fairly weak crime plot used as the framework to justify the boozy debauchery and often lecherous camerawork. The film begins with four college students (played by Selena Gomez, Vanessa Hudgens, Ashley Benson and Rachel Korine) preparing to head down to St. Petersburg, Florida to partake in the annual bacchanal of Spring Break. Unfortunately, they don't have nearly enough money to get there and actually do anything. Necessity is the mother of invention, though, and the girls decide to rob a restaurant as a way of bolstering their flagging funds. This serves as their baptism into criminality, one that soon sees them graduate to bigger jobs once they get to Florida.

While Spring Breakers is undeniably sleazy and luxuriates in its milieu of young people drinking, doing drugs and not wearing very much, there is a satirical point underpinning it all, albeit one that is as bleary-eyed as most of its characters. Though the scenes of the girls partying with hundreds of like-minded inebriates have a hazy, pounding rhythm to them, helped in no small part by the dubstep heavy soundtrack, they also come across as empty, fleeting experiences that will come to a crashing end when they have to return to the real world. Faith (Gomez) repeatedly calls her grandmother to tell her what a good time she is having, describing Spring Break as an idyll, as something not quite real. While The parties are depicted with a lascivious glee, the scenes in between are often quiet and, particularly in the second half of the film, strangely melancholic. While both the characters and the film acknowledge the fun of drinking and doing stupid things when you're young and stupid, there's also a keen sense of its impermanence.

This sadder tone begins to define the film more and more as it goes along, and particularly after the girls wind up getting arrested for drug possession. Unable to pay their bail, they are saved by Alien (James Franco), a local rapper and minor league drug dealer who finds the sociopathic resolve of the girls beguiling. After taking them back to his large beachfront home and showing off his possessions, or, to use Alien's own words and inflection, to make them look at all his "sheeeyit", he asks them to work for him as a way of paying off their debt. (Most of these robberies are shown during a haunting montage set to Britney Spears' 'Everytime', which marks the point at which the film wholly embraces its sadness, making even a supposedly cathartic final shootout seem less like a thrilling climax than a downbeat denouement.)

It's also during the Alien half of the film - and it is very much a film that can be divided squarely into pre-Alien and Alien halves, in terms of tone, style and overall quality - that the film's commentary reaches outside the actions of its five protagonists to envelope all of America. Both Alien and his rival, Archie (Gucci Mane) describe their opulent lifestyles, crammed with meaningless attainment, as examples of them living the American Dream. In a sense, they're right, in that they have definitely manifested their personal destinies and are able to live exactly the lives that they want to, but in the end it doesn't really amount to much. Similarly, the girls' pursuit of pleasure at any cost eventually leads them to commit acts of violent murder, suggesting that a life of idle enjoyment is not that far removed from one of nihilistic slaughter. Korine makes these leapss with often startling editing choices, giving the film a feverish quality that is both disorientating and intoxicating, and nowhere is this more ably demonstrated than in these dying moments.

However, while the philosophical ideas of the film might be intriguing, and intriguingly similar to those explored by The Great Gatsby (now there's a question I'd never imagined myself asking: "What would F. Scott Fitzgerald have made of Spring Breakers?"), it's also during the second half that the film lags noticeably. Apart from Franco's captivating, disquieting performance as Alien, the gang war aspect of the film never feels as vital or interesting as the scenes of the girls being self-involved and having fun in the first half. It winds up feeling like a less engaging Russ Meyer film; plenty of titillation but no spark. Its best moments, such as the aforementioned use of Britney Spears, come close to matching the intoxicated wooziness of the first part, but overall it feels too mechanical, and too much like Korine is lining up all the pieces for the final battle, in the process losing the loose, organic feel that makes the first half interesting.

It gradually loses the aspects that make it so fascinating, and its obsession with bare flesh is a touch masturbatory, but when it works, Spring Breakers is a hallucinatory and bizarre examination of errant youth that has something to say. It ultimately says it in a way which is slurred and barely comprehensible, but its boozy enthusiasm just about wins the day.