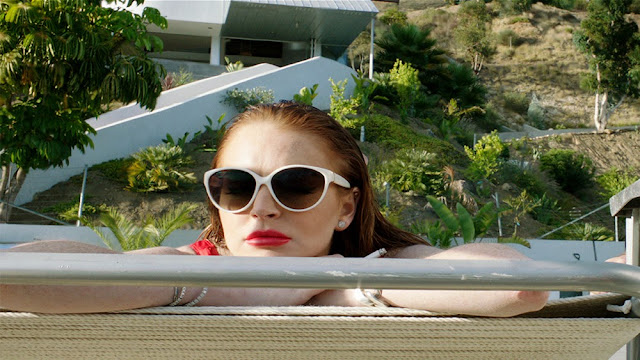 A portion of the audience for The Canyons will watch it out of a gleeful sense of schadenfreude. Quite a significant portion, in fact, because it is a film which stars Lindsay Lohan, and as such has become a small part of the travelling media circus that surrounds her. Yet any rubberneckers hoping to get some Liz & Dick-style hate-watching from The Canyons would probably be better off looking elsewhere since Paul Schrader's film, and Lohan's performance, have nowhere near the camp value of that misbegotten endeavour, and would make for pretty desultory viewing party material.

The Canyons covers several days in the lives of a group young Angelinos who are, in one way or another, connected to the production of a horror film that is just about to begin shooting. Christian (James Deen) is the spoiled producer who, at the behest of his girlfriend Tara (Lohan) and assistant Gina (Amanda Brooks) has hired Gina's boyfriend Ryan (Nolan Funk) to star in the film. During a dinner that opens the film, the group talk about the upcoming shoot convivially enough, but there's an undercurrent of unspoken tension between them, one that seems to go beyond Christian being a prick who delights in showing pictures of himself and openly brags about how he films Tara and himself having sex with strangers. It turns out that Ryan is in love in with Tara, and as soon as Christian gets wind of even the possibility of infidelity, things are going to be very bad for everyone involved.

Based on a script by Bret Easton Ellis, The Canyons has more in common with the weighty, deeply Catholic morality tales of Schrader's '80s and '90s work, particularly American Gigolo, than any of Ellis' arch, scabrous satires. It certainly bears the watermark of its writer in places, particularly in how it luxuriates in the vapid, shallow lives of the young, rich and good looking, but visually and tonally, it is all Schrader. Much like his characters, who seem to float through the story without anything seeming to affect them, right up until they are confronted with something terrible that can't be ignored, his camera glides over everything. He captures their lives in alternating scenes of blinding, blistering sunshine and oppressive night, all of which is undercut by a brooding, minimalist electronic soundtrack. Despite the presence of iPhones and Facebook, it feels like a continuation of the films Schrader made two decades ago, albeit with a distinctly more modern sensibility.

Yet while the film looks and sounds great, especially considering that it was made for a very low budget, it never reconciles its aesthetic quality with its languid plot. At times, it feels like it's just a "What are you doing here?" away from being a feature-length version of "The Californians." For the first eighty of its ninety-five minutes, The Canyons is a study of a group of characters who aren't particularly interesting, consisting as they do of raging narcissists and the odd simpering romantic, none of whom seem to have any perspective that extends further than the end of their own nose.  In the last fifteen minutes, the film shifts gears to become more of a noir, disturbing the faintly medicated air that permeates the rest of its running time by blasting in some much needed danger, but it feels as if Schrader is cramming all the plot that was meant to be in the rest of the film into the last couple of minutes. It's uneven, to say the least.

But it's not as if Schrader hasn't been able to mix plot and atmosphere in the past: both Light Sleeper and American Gigolo were in essence thrillers which just happened to sideline the genre elements in pursuit of moments of transcendence, but in those instances the plot served as a framework on which to hang the other, more interesting elements. Here they're treated as a complete afterthought, as if Schrader had started telling the story, then only realised at the very end that he'd forgotten to include a lot of pertinent information.

The problem seems to stem from a disconnect between Ellis' writing and Schrader's style. Ellis' talent lies in writing pitch-black satires about horrible people, turning a completely unsympathetic eye onto paper-thin characters completely undeserving of sympathy. Schrader, by comparison, is an empathetic artist who recognises the humanity in even the darkest and most marginalised individuals, and seems fascinated by the battle between the good and evil in everyone. In The Canyons, Ellis' character don't have a great deal of depth to them, yet Schrader tries to be sympathetic toward them despite how little there is to care about, while his sparse style sands down any satirical bite that is meant to lie in the story.

Obviously it'll be Lindsay Lohan's performance that gets the most attention, if only because of the tabloid baggage that she forever carries around her neck, and the film plays on that history somewhat. It's certainly hard to hear her say things like "I needed someone to take care of me," and not relate it to the slow motion car crash that her career has become over the last decade. She brings a rawness that fits the character of Tara, a damaged person who desperately needs to be loved, and that adds some authenticity to a character that otherwise could have been a very flat femme fatale character. She also shows an admirable willingness to commit to the film's handful of increasingly lurid sex scenes, which in turn gives credence to the underlying theme throughout of how sex can be used as a means of asserting dominance over others. It's a good performance that deserves a better film.

There's a recurring motif throughout The Canyons in which transitions between days are marked by shots of old, decaying cinemas, and all the scenes in which people talk about the production of the horror film have a clinical, bored, almost funereal feel to them. It feels as if Schrader is making a film about the death of cinema, or at least commercial cinema, which he explores by showing the vapid people who make the sort of films that he feels are slowly destroying the medium. It's an interesting idea, and The Canyons touches on themes which fans of Schrader will no doubt find fascinating, but the film he uses to explore them is a real chore. It might not be the death of cinema, but it certainly feels like it.