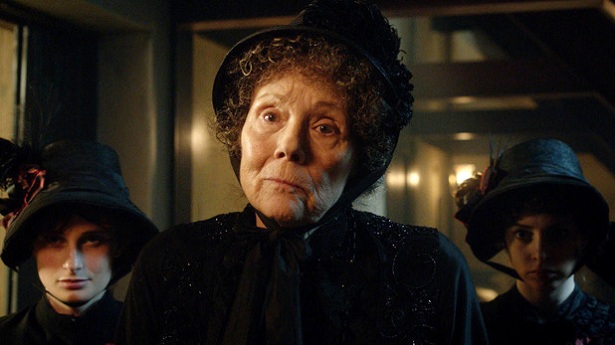 After last week's mostly good, but also horribly dreadful episode, it was nice to see Doctor Who right itself a bit this week, even if that meant offering up a story which, whilst fun, was not terribly memorable. It did, however, see a brief return of a plot structure that the show has played with in the past: Doctor Who without The Doctor. In fact, by my reckoning, this is the first use of this particular trope since "Turn Left" way back in 2008, and even though the episode moved away from it by the midway point, it was still interesting to see how Moffat's Doctor Who functioned without the presence of Moffat's Doctor. Turns out that it works surprisingly well, which is testament to what a well-oiled, if workmanlike machine it has become.

The Doctor-less first half begins in Yorkshire in 1893, which got me feeling very nostalgic since I until recently lived in Yorkshire (but not because I've been alive since 1893. Why would you even suggest such a thing? [laughs nervously, tries to hide photos of himself in Victorian garb]). A young man and woman say a quiet goodbye to each other as he goes to investigate something that lies through a red, glowing door. Moments later, Mrs. Gillyflower, an old woman played by the former Mrs. James Bond Diana Rigg, shows up with a cadre of creepy supporters to express their condolences over the death of the woman's husband. The young woman expresses some uncertainty, claiming that her husband is alive, then she hears a blood-curdling scream and is set upon by the group.

Coming from show veteran Mark Gatiss, this was a pretty effective little opener that established a lot with very little, as the best cold opens should. It also set the tone for the whole episode, which was one of creepy intrigue for the most part, much of which got jettisoned in the final third for the usual race against time, save the world nonsense that the show uses a crutch for easy drama. The Problem of Perspective rears its overly grandiose head once again.

The man is found both very dead and bright red, and back in London his brother enlists the help of the Silurian Madame Vastra (Neve McIntosh), her partner Jenny (Catrin Stewart) and the Sontaran Strax (Dan Starkey) in order to figure out what killed him, as well as a host of other people who have shown up bearing signs of the Crimson Horror. They're not terribly interested initially, but as soon as they are presented with photos, known as Octograms, that show the last images the victim saw - an idea most famously used in Wild Wild West, which isn't the best of associations. This particular victim's last image was of The Doctor, which gets everyone excited and on their way to Yorkshire.

I really rather like the trio of Vestra, Jenny and Strax. I like the idea that there is this group of characters who exist separately from The Doctor and have their own adventures. Even if we don't get to see them except for when they cross paths with The Time Lord, I still think it's cool to give this sense of an ongoing, broader universe (one that I assume is probably being explored in some expanded universe fiction). I also like the chemistry between the actors and find the overly militaristic Strax to be a really funny character, so I had a lot of fun with the first half of the episode, which felt like one of those episodes of The Sarah Jane Adventures where The Doctor just happens to be a plot point, rather than the driving force of the narrative.

After arriving, the trio discover that Gillyflower's organisation it is a kind of quasi-religious group who exploit the fear of the Crimson Horror in order to get people to come to their community, known as Sweetville, and presided over by Gillyflower and the unseen Mr. Sweet. Jenny, being the only one of the three who isn't a hideous monster, infiltrates Sweetville and discovers The Doctor, who displays the same red, hardened skin as the dead man. It turns out that The Doctor came to investigate and found that Gillyflower had been preserving people using a strange chemical formula. It didn't work on The Doctor since he is not human, and he was cared for by Gillyflower's blind daughter, Ada (Rigg's real-life daughter Rachael Stirling) who takes to referring to him as "my monster".

The process turns out to be really easily reversed, though, and The Doctor and his old chums find Clara, confront Gillyflower, and learn that Mr. Sweet is a disgusting red leech who has formed a symbiotic relationship with her. If there was anything that stood out as especially cool about this episode, which quickly devolved from that point on into another "the Doctor must save the entire world" plot once it became apparent that Gillyflower planned to use a rocket to spread her chemical across the globe, it's probably how utterly disgusting Mr. Sweet looked. It was a really nice physical effect which looked absolutely gross and horrible, and felt very much like the sort of thing kids will start worrying about finding under their beds. Great work from the production team on that one.

Anyway, things wrap up as you would expect them to: Ada learns that her mother has been experimenting on her; the rocket gets launched, but only after the poison has been surreptitiously removed; Mrs. Gillyflower falls to her death and Mr. Sweet is beaten to a gooey pulp by an enraged Ada. The Doctor and Clara leave the team to their own little adventures, though only after Jenny asks The Doctor if he has figured out what is going on with his new Companion, and Clara goes home. The only wrinkle in the story is that once she gets there, the two kids she nannies show her pictures of her throughout time, then blackmail her into taking them time travelling. It's a nice little ending which acknowledges the stresses of living a secret life with The Doctor, while also setting up some easily-packaged peril for next week's episode.

There's not a huge amount to say about this episode. It was a solid Doctor Who that was only really disappointing in the way it moved away from Vastra, Jenny and Strax so early on in proceedings. The fun of doing a 'Who, without The Doctor' episode is that it allows the audience to see something familiar from a new perspective, while also forcing the writers to come up with solutions that aren't just variations on "Use sonic screwdriver, declare greatness, repeat as required".

Admittedly, it's an approach that doesn't exactly have a flawless track record - "Love & Monsters", widely regarded as one of the worst episodes in the history of a show which has had its fair share of terrible episodes, is one such example - but it can be very interesting and can offer an opportunity to explore how other characters view The Doctor and his effect on the world. So to curtail that by having The Doctor show up weakened, then heal remarkably quickly, kind of feels like a wasted opportunity, even though the episode didn't exactly become awful after he showed up. It just felt like an episode that could have been a lot more interesting than it ultimately was.


- Not a terribly good week for Clara considering that she actually had stuff to do last week. I mean, that was largely because she was frozen for three-quarters of it, but even when she was unfrozen the script didn't make particularly great use of her.

- This episode marks the first time that Diana Rigg and Rachael Stirling have ever appeared on screen together, which is kind of neat, even if it did involve the former putting a gun to the head of the latter.