Doctor Who - Journey to the Centre of the TARDIS (S07E11) 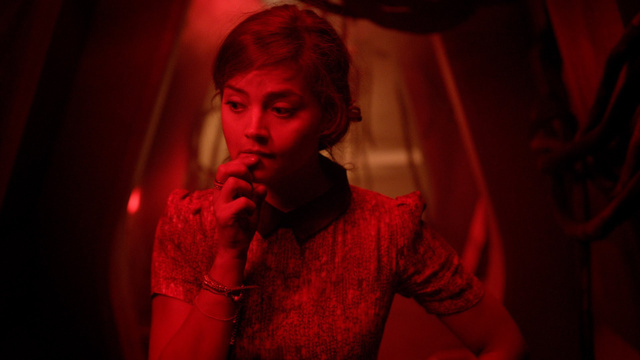 Time travel can, in the right hands, be an immensely powerful storytelling device, one which can serve any number of styles and genres. If you want to see how it can be used effectively for comedy, thrills or queasy dread, you only need to watch Back to the Future, Twelve Monkeys or Primer. Alternatively, you could just watch Doctor Who, a series which, owing to the nature of its protagonist, has had ample opportunity to employ time travel to those ends and more besides. Some of the best, most innovative episodes in recent years have used time travel to great emotional effect, particularly in episodes like "The Girl in the Fireplace" which emphasised the fatalism at the heart of a good time travel story. It's an intriguing, haunting conceit to give someone the ability to jump around in time at will, then reveal that ultimately there are some things that can't be changed.

But there is a dark side to time travel, and I don't just mean in the way it killed the late Ron Silver in TimeCop. No, the dark side of time travel lies in the temptation it presents to writers who might be looking for an easy way to resolve a plot by basically wiping the slate clean. Killed off a character you liked? Just travel back in time and save them. Revealed some potentially story-altering secrets? Just change the past so no one remembers them. Trapped the cast in a deadly situation that they can't get out of? Just hit the reset button.

That may be the most infuriating part of "Journey to the Centre of the TARDIS", an otherwise fun and inconsequential episode; it not only uses time travel to erase its events entirely, but does so with a painfully real, though admittedly friendly, Big Red Button, which is as close to a literal deus ex machina as you can get without God actually showing up to sort everything out. I mean, there's lazy, then there's several layers of just not giving a shit, then you finally arrive at the level where writing a script which actually features a physical reset button is something you would ever think of doing.

But I'm getting ahead of myself: there's an entire episode (which didn't actually happen) before the button makes an appearance. To begin with, The Doctor and Clara are wondering why The TARDIS doesn't seem to like Clara. As we all know, The TARDIS is a living, thinking device which responds to the people around and inside it, and The Doctor doesn't like the idea of the two women in his life not getting along. In order to fix the issue, The Doctor sets The TARDIS to "basic mode" so Clara can fly her and get better acquainted, an action which proves to be unfortunately timed since it's at that exact moment that a salvage ship detects them and decides to beam them up.

The combination of powerful magnets and a TARDIS with its defenses down makes everything go a bit Irwin Allen and causes massive damage throughout the little blue box. As well as causing it to leak power and time, the accident separates The Doctor and Clara, with the former being trapped outside and the latter getting hurled into the dark recesses of the TARDIS, where she soon finds that she is not alone. Not one to be deterred, The Doctor convinces the three-man salvage crew (played by Ashley Walters, Mark Oliver and Jahvel Hall) to enter with him, promising them a great reward. Being something of a trickster, he leads them inside and pretends to activate a self-destruct system which will supposedly destroy them all if they don't find Clara, though the damage proves more severe than anticipated and The TARDIS' engine actually does threaten to detonate and cause some series trouble.

The key thing that needs to be said about "Journey to the Centre of the TARDIS" is that it is an episode in which very important things happen, all of which are completely inconsequential. Clara winds up in the TARDIS' library and reads a book on the Time War, in the process discovering The Doctor's real name; The Doctor reveals to Clara that they have met before and that she had died on both previous occasions, realising in that moment that she knows nothing of her strange existence; the salvage men reveal that one of them is not, as he had previously thought, an android, but their very human brother.

There are a lot of secrets milling around, all of which are revealed by the end of the episode, and all of which are rendered moot when The Doctor travels back in time to before the crash, throws Past Doctor and Clara the Big Red Button, thereby allowing them to alter the timeline just enough to prevent their meeting with the salvage ship. The characters who died get to live, the secrets that were told are secret once more, and I wonder if I could have just skipped the episode entirely considering it didn't actually happen.

It feels like a terrible cheat to have some pretty big developments happen, seemingly advance the greater plot of the series, then basically say that none of them matter because the timeline was erased. There is a hint at the end that some of the events have echoed into the new timeline, something signaled by a moment in which Walter's character is nice to his faux-artificial brother, an action which would be inexplicable if it wasn't the reflection of some ripple in the fabric of space and time. Even if that is the case and the knowledge that Clara and The Doctor have both attained does come back to them, it doesn't stop the episode from being filler in terms of the broader story, even if it is pretty fun in and of itself.

It's important to say that this is by no means a bad episode of Doctor Who, even if does resolve itself in a pretty terrible way; there are plenty of individually strong elements. The creatures that chase Clara through the corridors of the TARDIS are creepy looking and have a suitably nasty explanation for them: they are the charred and scarred future versions of the characters after being exposed to the power of the TARDIS for too long. The scene in which The Doctor and Clara walk through the exploded heart of the TARDIS, whilst a little overly reminiscent of The Matrix, was visually impressive yet subtle, which is not an easy trick to pull off. The episode also has a nice sense of perspective to it, being largely about the fate of the five characters as they struggle through the crisis, and the three supporting players had a nice rapport that made up for how much their storyline felt crow-barred in. These were all positives in its favour.

Unfortunately, the entire enterprise is marred by the Big Red Button, which renders all of the other aspects completely pointless. That wouldn't be the worst thing in the world if the things that happened in the story were unimportant, and I am willing to give the show the benefit of the doubt and assume that they may prove important later on. But because the script by Steve Thompson - who also wrote the little-loved (by everyone except me) "Curse of the Black Spot" - had things occur which seemed to move the characters along by getting things out in the open, then erased them from history, it felt as if the show was trying to have its cake and eat it, offering us something we might actually want, then giving it the chance to completely ignore it and start again next week. It's tough not to feel a little cheated by such a lazy trick.


- I always enjoy episodes which revolve around characters going inside The TARDIS, even if the interiors do look a little bit like they are used to stage LazerQuest games between shoots.

- The deterioration of The TARDIS was noted by seeing and hearing echoes of previous episodes, which was a nice little touch. It also seemed to fit in with the idea of this year being something of a celebration of the legacy of the show, though it was a lot more elegantly handled in that regard than, say, the nods and winks to James Bond's past in Skyfall.

- I haven't seen Ashley Walters on television for quite a few years, so I didn't realise it was him until the credits rolled. This is probably for the better, because I otherwise would have spent most of the episode trying to remember his verse on "21 Seconds" by So Solid Crew. To save you the time, here it is:

Asher D's never fading
Second in stay song till I'm bathin'
B - A to the D's never phasing
I wanna tell my enemies if we're racing
So Solid they're amazing
In few g's we're bound to be laced in
Addicted to this life that we're tasting
You blame me for the life you been wasting?
You hating, girl there's money to be making
Act a MC a never brakin'
Smoking mac g's like a Jamaican
So when you lookin' at me you start takin'
Creating

- I'm always a bit wary about ogling the Companions on Doctor Who, but Jenna-Louise Coleman did look especially beautiful in this episode. Pre-disfiguring burns, obviously.

- Next week brings another Mark Gatiss-written episode, which means it will either be a lot of fun or a little drab. Considering that it looks like it is about people being turned into candy, I'm hoping for the former, if only because it seems to recall his very funny Lucifer Box novels.
By Edwin Davies
Labels: Doctor Who, Jenna-Louise Coleman, Matt Smith, review, science fiction, television, TV review
Newer Post Older Post Home