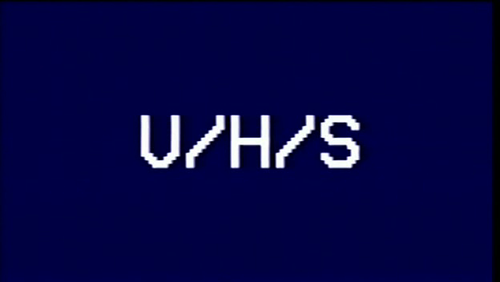 By their very nature, anthology films are pre-ordained to be variable in quality. No matter how good the material or the creative figures involved, any attempt to create a film consisting of self-contained short films is bound to end up with some working and others falling flat. Horror anthologies are especially difficult since different kinds of stories tend to sit uneasily along side each other. It's a problem that plagues the multi-director film V/H/S, which lets a group of young film-makers run wild with the concept of found-footage films, only half of which ultimately deliver on the concept.

The framing narrative revolves around a group of young men who film themselves committing crimes in order to sell the resulting videos to those who get a kick from watching real-life instances of assault. They take a job for a mysterious third party which involves breaking into a house, a task they take to with gusto since it represents something new and dangerous to add to their repertoire. Having done so, they discover a dead body and a pile of video tapes which one of the burglars watches whilst the others search the house, discovering things that probably would have been best left hidden.

Directed by Adam Wingard, this part of the film functions as a decent way of connecting the otherwise unrelated stories, but never develops much momentum of its own. Then again, since the short is chopped up to make room for the others, that's hardly surprising, and at the very least it packs in some effective jump scares and at least one great gag from the abruptness of the transitions between films.

The first short proper, entitled "Amateur Night" and directed by David Bruckner, makes a big impression, thanks largely to a premise which starts out incredibly sleazy - a trio of young men bring women to a motel room in order to film an amateur porn film with a camera disguised as part of a pair of glasses - then gets increasingly crazy as one of the women proves to be more than they expected. It's basically the filthiest Twilight Zone episode ever made, minus the wit and social commentary. The film never puts forward a truly convincing argument for why it isn't the sort of exploitative sleaze that its trifecta of twats would enjoy unironically, and the story disappointingly shifts from an uncomfortable depiction of rampant misogyny to unfettered craziness, but there's something about the keening tone of insanity it peaks with that makes it work in spite of itself.

The second and third segments are the most forgettable, which is a shame considering that the first comes from the supremely talented Ti West (House of the Devil, The Innkeepers) and the second is the only one to exploit the technology of video recording to any great extent. West's segment, "Second Honeymoon," in which a couple record themselves on vacation, unaware that they are not the only ones using the camera, demonstrates that there is a limit to his particular brand of slow burn horror, which requires time to get to know the characters or develop atmosphere before delving into darkness. It proves an ill-suited match for the food footage aesthetic, which makes the slow build monotonous, though it has a disturbingly visceral climax which is actually well served by the style, since it removes any degree of artifice and remains all the more gruesome for it.

"Tuesday the 17th" has a funny title and that's more or less where the interesting things about it end. The plot sees a group of young people heading out to a secluded forest, almost all of whom are unaware that very bad things can happen when teenagers head out to secluded forests. Director Glenn McQuaid makes good use of the nature of recording devices to heighten the tension, making the camera itself central to uncovering the horror that stalks the woods, but it's a clever gimmick that feels wasted in a short that winds up consisting largely of handheld footage of someone running through trees. More than any of the other shorts, "Tuesday the 17th" conforms to every criticism about how found footage films are little more than a way for people who don't know how to make films to make films. It does end on a surprisingly literal interpretation of the underlying thesis of the collection; a camera can be a deadly thing in the wrong hands.

Fortunately, the final two segments end the film on a strong note. "The Sick Thing That Happened to Emily When She Was Younger" ditches any analogue aspirations and instead goes completely digital by having its entire story play out through a series of conversations over Skype (or a Skype-like service). It's a very restrictive approach, but one that plays on something that is very commonplace by injecting something uncanny into it. At the same time, being able to see one person witnessing terrible things happening to another but being unable to help adds a nice dynamic to the story, highlighting the impotence of watching something happen in real-time whilst also hinting at the voyeurism involved as well. It's hard not to see something of a commentary on the relationship between horror and its audience in this situation. It's a great set-up lacking a particularly good punchline, but director Joe Swanberg displays a willingness to mess with the established format of the anthology that probably could have benefited the weaker segments.

"10/31/1998", from a collective known as Radio Silence, revolves around a similar idea to "Amateur Night" - a group of young men head out for a night but find more than they bargained for - but distinguishes itself in two key ways: the nebulous terror around them builds more naturally to a great crescendo and the characters aren't completely unlikable dicks. The men in question head out to a Halloween party and wind up in a house that has the requisite brief flashes of ghostly figures who disappear as soon as the camera flashes back to them, but which gets progressively crazier. It ends up recalling as diverse a range of influences as Rosemary's Baby,  La Belle et la Bête and The Shining, and seems to have more than a shade of Mark Z. Danielewski's "House of Leaves" about it. It's a really effective entry into the "malevolent building" sub-genre which also looks better than pretty much all of its compatriots within V/H/S.

As an argument for the found footage horror as something that can offer more than Paranormal Activity sequels and knock-offs, V/H/S is largely successful. Even the weaker segments try something new with the style and at the very least engage with the technology in ways which most examples of the genre do not, and the ones that succeed make good use of the shorter format to deliver scares without the problem of stretching a neat idea over too long a time. However, the films themselves vary so wildly in quality that the film as a whole veers from terrifying to banal in a way that is dispiriting, even it it was probably unavoidable. An interesting experiment that offers enough scares to satisfy, but which only fitfully fulfills its potential.