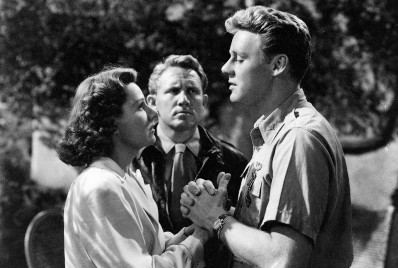 After America entered World War II in the wake of Pearl Harbour, there was a raft of Hollywood films dedicated to making the case for war in ways both subtle and not. The Ox-Bow Incident, for example, is a Western about the dangers of mob mentality and the terrible things that can happen when good men do nothing. It's a story that could have been told at any time, yet the context of when it was produced and released - not to mention the inclusion of a card asking viewers to buy War Bonds at the end - indicate how film-makers were using their art to support the national cause.

What's interesting about a lot of the films that followed this trend is that the really great ones transcend the potential jingoism of the time and have enjoyed long after-lives as stories about morality, nobility and perseverance. Though the context in which they were made is very specific, and the films served an even more specific purpose, they dealt in big, universal themes with continue to echo today. The Ox-Bow Incident is one such film, but so are undeniable classics like Casablanca, The Life and Death of Colonel Blimp and the lesser known, achingly romantic A Guy Named Joe.

Spencer Tracy plays Pete Sandidge, a cocky bomber pilot (not that there are many other kinds) whose skills are matched by his tendency to take dangerous risks at every opportunity. His disregard for his orders and personal safety makes him a thorn in the side of his commander (James Gleason) but wins the admiration and affection of his fellow airmen, as well as the love of Dorinda Dunston (Irene Dunne), a civilian pilot who begs Pete to take a safe job in the States as a trainer, fearing that he'll take one risk too many and wind up dead. It's a fear that proves very well-founded since Pete perishes during his final mission, taking out a German ship in the process.

Dorinda and Pete's best friend Al (Ward Bond) are devastated, whilst Pete himself is surprisingly unperturbed by the turn of events. When he finds himself walking through a vast infinite space of clouds, he thinks nothing of it until he spots his old friend Dick Rumney (Barry Nelson), a man he hasn't seen in a while on account of him being killed some months earlier. Pete says that he must be dead or crazy if he's seeing him, and Dick assures him that he isn't crazy.

Having come to terms with his own demise, Pete discovers that the Air Force isn't done with him yet. After meeting "The General," a figure played by Lionel Barrymore (in a performance a million miles away from his beyond iconic role as Mr. Potter), he learns that deceased airman return to Earth to act as guides to new pilots, the better to protect them from the dangers of the skies. Setting aside the question of where one of these was when Pete needed help, or whether or not the German pilots have their own guardians, it's a great device that allows Tracy the opportunity to have fun in his own irascible way, mocking Ted Randall (Van Johnson), the young man he is assigned to whilst slowly making him a better pilot through posthumous suggestion. There are few actors who could play a prick as charmingly and enjoyably as Tracy, and here he was on fine form.

The film's premise shifts from sad but funny to sad and poignant once Randall meets and falls in love with Dorinda. Over the unheard protestations of Pete, the two drift inexorably towards each other. This is where Pete starts getting angry and petulant, and his needling of Randall becomes more bitter and dangerous as he prompts him to perform riskier manoeuvres in the hope that he will be transferred somewhere far away from Dorinda. Unsurprisingly, The General has some qualms about that, and summons Pete to have a little chat.

It's here that director Victor Fleming and screenwriter Dalton Trumbo reveal the underlying idea of the film, the idea that it is imperative that people be willing to sacrifice their personal wants and desires in pursuit of a greater cause, and that the greatest cause of them all is the future. Not, as might be expected given the time, America or being a hero, but the future; ensuring that freedom will exist for those not yet born, and accepting that the actions of people now living matter because of the effect those actions will have through the ages. It's a very moving scene, one that speaks to the potential even someone as relatively insignificant as Pete has to improve the world. and it's one that avoids being histrionic or melodramatic. Tracy and Barrymore are very quiet and calm, and that gives their conversation weight and power.

If that scene provides the intellectual argument for accepting that the future is what matters above all else, it's the final scene of the film that provides the emotional one. Pete tells Dorinda that it's okay for her to love again, that she'll regret pining over him and that she needs to build a new life. As he watches the two walk away, he slowly fades from view. It's a beautiful moment, rife with old Hollywood romanticism. It's hardly surprising that it's one of the moments that made Steven Spielberg want to make movies (or that he would later remake the film in 1989 as Always), which is wonderfully apt. Much as Pete had an impact on the world even after death, A Guy Named Joe wound up having a greater influence on cinema years after it was released than it did at the time of its release. It's the future that matters most, after all.
By Edwin Davies
Labels: 1940s, Cinema, classic, comedy, drama, film, film review, Romance, Spencer Tracy, Steven Spielberg, Victor Fleming
Newer Post Older Post Home