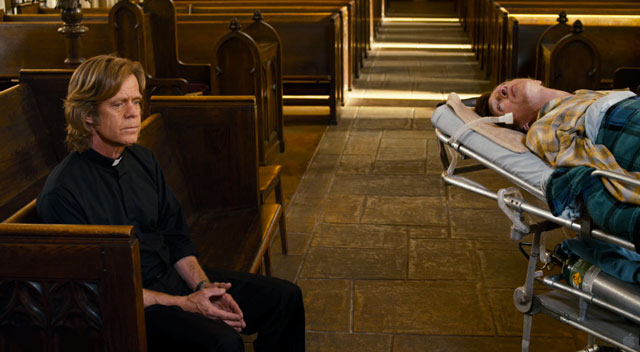 Based on the real-life story of Mark O'Brien (John Hawkes), a poet and journalist who spent most of his life in an iron lung after contracting polio as a child, Ben Lewin's The Sessions focuses on the period of O'Brien's life where, at the age of 38, he decided to seek the help of Cheryl Cohen Greene (Helen Hunt), a professional sex surrogate, in order to lose his virginity. In the process, O'Brien develops a friendship with Greene that is all too easily blurred by their professional involvement, and is forced to confront his own attitudes towards sex, and how they were in turn shaped by his past, his parents, his Catholic faith, and the accompanying guilt arising from all of the above.

The Sessions is a rare occurrence in contemporary American cinema: a frank, honest film about adult sexuality that treats sex seriously, rather than as something titillating or hilarious, the two default modes Hollywood falls back upon time and again. Yet it is also completely lacking in any pomposity or self-seriousness about its own rarity. Even though the character of Mark O'Brien is perfect Oscar-fodder - a brilliant mind trapped in a body which is unable to move - John Hawkes does not treat it as such. He completely avoids all opportunities for theatrical histrionics, and instead delivers a performance which is light, charming and often funny. In short, one that suits a man who has lived the majority of his life in on a gurney and learnt to cope with it. It's about as far away from his performance as a magnetic cult leader in Martha Marcy Marcy Marlene as it is possible to get, even if his usual wiry frame denotes helplessness here just as effectively as it suggested physical menace there, or in his Oscar-nominated turn in Winter's Bone.

Helen Hunt is also great as a woman completely at ease with herself physically, but subtly uncertain about her emotional well-being. The film offers little insight into Cheryl's home life - instead focusing primarily on O'Brien's chaste relations with women and his friendship with a local priest (William H. Macy) who blesses his endeavour - but what little we see suggests that she is happy with her husband (Adam Arkin), but somewhat uncomfortable with his suggestion that she convert to Judaism for the sake of his family. There's a sense that even though the sessions she and O'Brien share are conducted in a way which is as clinical and professional as possible - the sessions are limited to a total of six, and the discussions about sex are very matter-of-fact and anatomical - there is still an emotional element that can't be fully extracted because they give her something that the rest of her life is lacking. What that may be is never said, but Hunt does a great job of suggesting depth to a character that could have been one-note in lesser hands.

It all comes back to the idea of whether it is possible to separate the physicality of sex from the accompanying messiness of the feelings involved (an idea that Hollywood so loves exploring that it made two romantic comedies based on that idea last year) but it does so in a way which is mature, thoughtful and intelligent. The film doesn't completely ignore the humour of such a situation, and finds particular delight in exploring how people outside of Mark and Cheryl's relationship fail to grasp quite what it is, but it largely plays it straight-faced, and engages with the emotions of two people who enter into a strictly professional relationship which can not - and perhaps should not - be fully divorced from the personal one that grows alongside it.

Whilst these are all positives in the film's favour, The Sessions is ultimately much better in the abstract than it is in execution. Despite a trio of very engaging central performances from Hawkes, Hunt and Macy (who does a lot with very little screen time), not to mention a raft of solid turns from Moon Bloodgood, W. Earl Brown, Rhea Perlman and Robin Weigert, the film winds up being dramatically inert. The story is fairly formless by design, takes a long time to introduce Hunt and ends quite abruptly, all of which are not necessarily negatives, but are made so by the direction. Put simply: The Sessions looks terrible. It's visually bland, the editing is slack in the worst possible way, often failing to nail jokes that are clearly funny on the page, and ultimately telling an interesting and fascinating story in the most pedestrian manner imaginable. The strength of the story and the performances are just about enough to win the day, but the whole endeavour winds up so painfully dry that it feels like a Pyrrhic victory at best.