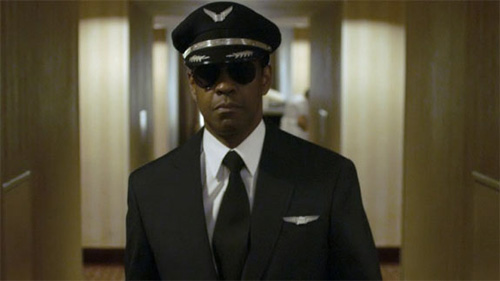 Flight is a film about two crashes. One is quick, external and literal, the other is prolonged, internal and metaphorical, but both are equally harrowing. The former occurs on a seemingly normal day in the life of Whip Whitaker (Denzel Washington), who is introduced lying on a bed, still drunk after a night cavorting with a beautiful woman half his age (Nadine Velazquez). After snorting a few lines of cocaine to counteract the effects of the alcohol, he strolls out to reveal that he is, in fact, an airline pilot, and he's got a plane to fly from Orlando to Atlanta. Despite his inebriated state, Whitaker remains a highly skilled professional, and the plane has a relatively smooth take-off in the face of adverse weather conditions.

As the flight nears its conclusion, though, things start to go very badly, and it's only through performing a daring and borderline crazy manoeuvre that Whitaker is able to turn a catastrophe into a relatively minor tragedy. He and most of the passengers and crew walk - or at least limp - away from the wreckage, but Whitaker's problems are only just beginning. Even as he is being publicly lauded as a hero, privately, a toxicology report threatens to reveal his state of mind at the time his plane started hurtling towards the Earth, and even though that almost certainly was not the cause, he might still be blamed for it as a result.

It's at this point that the second crash begins. Although Flight begins with a spectacular set-piece, it very quickly shifts to become a much smaller, no less turbulent examination of a man's struggles with alcoholism. As his lawyer (Don Cheadle) and Union rep (Bruce Greenwood) work to keep Whitaker out of jail, he retreats to his family farm, where his battle with the bottle intensifies, turning into all-out war fraught with small victories and bitter defeats. Despite clearing every drop of alcohol from the farm, Whitaker finds himself relapsing. Without the flights that allowed him to at least be a functional alcoholic, he spirals further downwards. Just as he was able to briefly right his plane, but ultimately lost to gravity, he is occasionally able to rise above the crushing weight of his dependency, but each time he is dragged down by it.

Much like Nicholas Cage in Leaving Las Vegas, the power of Washington's portrayal of an alcoholic lies in his ability to play on his personal charisma and magnetism whilst also pushing it about as far as it can go. Whip Whitaker might be an incredibly gifted pilot who saved the lives of many people, but he's also a complete wreck of a human being who has destroyed every meaningful relationship in his life. Yet because Washington plays him as a charming guy, it's easy to see why people are drawn to him, such as the drug addict (Kelly Reilly) who falls for Whitaker even as his lack of sobriety threatens her own, which is new and incredibly fragile. The glimpses of his relationship with his ex-wife and son suggest that even though he might be able to put on a smile for the world at large, behind it all lies a dark, consuming emptiness that Whitaker, try as he might, can't help but fall into.

Robert Zemeckis has spent much of the last decade making motion-capture animations like The Polar Express and Beowulf, films which might be technically impressive, but also wind up being creepily inhuman in their lack of rough edges. It's heartening to see him return with a story that is so unabashedly messy. That's not to say that it's sloppy - John Gatins' script is lean and focused - but it recognises that someone with the problems that Whitaker has is unlikely to have a smooth, easy road to redemption, assuming he deserves it at all. The story moves fitfully as major events in the investigation of the crash are often only referred to in passing, allowing for a keen and unbroken focus on every shaky step of Whitaker's journey. Fortunately Washington is more than up to the task of carrying such an unbroken gaze.

Some of the other elements of the film are less solid. Zemeckis has never been a particularly subtle director, and there are numerous moments in the film where his musical choices are so on-the-nose - none more so than introducing Whitaker's friend/drug dealer Harling Mays (John Goodman) to "Sympathy For The Devil - that they can only induce weary sighs. They're too glaringly obvious for a story which otherwise avoids an easy depiction of alcoholism for one which is far more grounded and true. It also stands at odds with the more fascinating elements of the film, such as how it equates Whitaker's scepticism of God and religion with his refusal to acknowledge his alcoholism. Both can be seen as forces outside of Whitaker's control, so his resistance to one is an extension of his denial of the other. It's an interesting idea that the film never overplays, but it also makes the more overbearing touches feel even more so.

Despite the tendencies of its director, Flight is a compelling drama that engages with its main character's addictions in a way which is surprisingly raw, especially compared to the glossy sheen with which it is delivered. Washington delivers a performance which should be remembered as one of the best portrayals of alcoholism on screen. It says something that the tensest scene winds up not being the plane crash, but a static shot of a bottle of vodka, waiting to be opened.