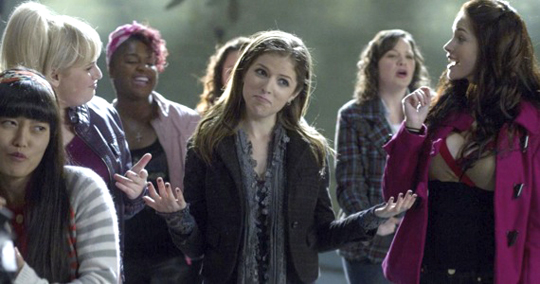 Starting college is not an easy time for anyone, but it's particularly hard when you don't want to be there in the first place. Such is this case for Beca (Anna Kendrick), a freshman who finds herself attending Barden College pretty much against her will. Beca is a budding DJ and producer who wants to go to L.A. to try to break into the music industry, but her father, who is a professor at Barden, insists that she has to get an education first. The two come to an agreement, albeit one that is both so slight as to be unimportant yet to convoluted to ignore. If Beca really makes a go of it and tries to have the true college experience, if she joins clubs, makes friends and actually tries to enjoy herself, but winds up deciding that it isn't for her, then she can drop out and go to L.A. The only problem is that she actually needs to make that effort in the first place.

Fortunately for Beca, Barden's all-female a cappella group, The Bellas, is recruiting. Following a devastating loss the previous year at the hands (vocal chords?) of The Treblemakers, their all-male rivals (Pitch Perfect is, if nothing else, awash with silly puns) in the national finals, the group's perfectionist leader Aubrey (Anna Camp) is determined to fight back. Things look unpromising, though, since her team this year consists of Beca, who questions their reliance on old standards and stodgy arrangements, a boisterous Tasmanian who refers to herself as Fat Amy (arguable stand-out Rebel Wilson) so that "skinny bitches" can't say it behind her back, and an Asian girl who never speaks above a whisper (other arguable stand-out Hana Mae Lee). Can this ragtag group of misfits overcome their lack of co-ordination to triumph, and maybe, just maybe, learn a little something about themselves in the process?

Structurally Pitch Perfect is more akin to an underdog sports movie - complete with training montages, rivalries and unofficial contests that play out beyond the sanctioned competition - than a musical. If you were to take the basic beats of the story and just substitute baseball for singing, you'd have more or less the same basic film. You could even keep the title. This is really not a criticism of the film, though - the reason why this particular template has been used so often is because it works incredibly well. Yet as far as story goes, there's not a huge amount that people won't have seen before. Not that the film-makers aren't aware of this problem: they even pre-empt such criticism by having Beca explain to her love interest/singing rival Jesse (Skylar Astin) that she doesn't watch movies because they always end so predictably (in a scene which also includes a pretty sharp Star Wars joke that I hadn't heard before, and I've heard a lot of Star Wars jokes).

Pitch Perfect transcends the formula thanks to its chosen competition, which allows for a nice melding of the drive of a sports movie with the aural excitement of a musical. This has the added advantage of preventing the film from getting too bogged down in the personal lives of the characters, in turn distinguishing it from Glee, very much the singing, dancing elephant in the room where Pitch Perfect is concerned. The competition itself is treated in a relatively serious way by the narrative since it is the skeleton upon which the story hangs, even if the filmmakers never miss an opportunity to poke fun at how ridiculous it all is at the same time.

The performances in the film are hugely fun, with the all too few mash-up arrangements being particularly great for anyone who knows the songs in question. By the nature of a cappella singing, which is based on vocal performance rather than physical movement, there is not much room for the visual dynamism that the best musicals offer, but director Jason Moore injects plenty of vim into each one and prevents them from ever getting too stodgy or static.

Writer Kay Cannon also manages to make the non-singing parts of the film enjoyable with a script that is funny, not functional. Cannon is a veteran of 30 Rock and anyone familiar with that show will recognise the mix of pop savvy repartee and solid understanding of female relationships that runs through Pitch Perfect. Whilst Beca is the only member of the Bellas who is especially well-drawn, Cannon and the actors do a fine job of shading the remaining members just enough that they never become blurry or indistinct. They even find time to insert some weirdness around the margins by, for example, including several scenes of projectile vomiting (that, even more weirdly, are legitimately justified by the demands of the story), and by giving Hana Mae Lee some truly disturbing - if barely audible - lines. Though Rebel Wilson is probably going to be the cast member who gets the most press for her big and brash performance, Lee is the one who gets the most laughs per second of screen time. The script strains to create variations on the phrase "a cappella" to be used as slang (e.g. "a ca-scuse me"), pretty much all of which fall flat, but fortunately there is more to its comedy than just forced wordplay.

The only area in which Pitch Perfect fails to hit the right note is in its romantic subplot, which finds Beca drawn to the slightly dorky charms of Jesse whilst also trying to maintain the same sense of ironic detachment that she has to everything in her life. It's not a bad area for the film to explore, especially since the way in which people overcome ideas of 'coolness' to become involved in adult relationships is painfully under-examined in cinema, but it feels so perfunctory. There's a real sense that no one involved with the production is that invested in whether Beca and Jesse will get together and that in turn comes across to the audience. Considering how many sports films feature these sorts of crowbarred in personal relationships anyway (see, for example, Brad Pitt's relationship with his daughter in the otherwise excellent Moneyball) it does lend a certain completeness to the idea of Pitch Perfect being an example of the sports movie as musical.

Aside from that slightly bum note, Pitch Perfect is a lot of fun. Each part of the ensemble performs their part well, and whilst it could probably have benefitted from more biting wit or inventive arrangement, the overall effect is more than pleasing to the ear. It's a fun, lively experience with plenty of laughs and exuberance, and which even manages to get as close as any mainstream film is ever likely to get to including the legendarily filthy lyrics of Azaelia Banks' "212". If that isn't worth celebrating then I don't know what is.