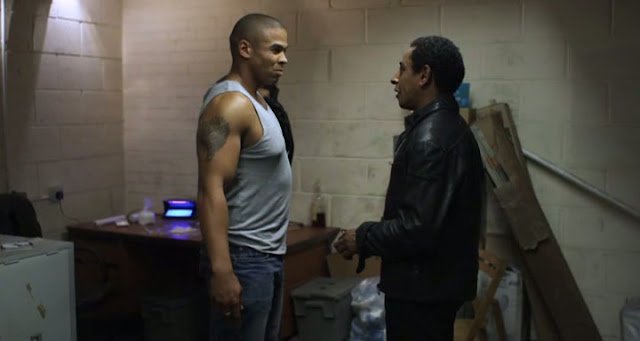 Covering a week in the lives of the denizens of a London estate, the debut feature from Ben Drew (better known as Plan B) initially seems to be a fairly standard entry into the gritty, British crime drama sub-genre. Its collection of small time criminals, drug dealers, prostitutes and wayward youth are pretty standard archetypes, whilst its multiple storylines, taken separarely, are overly familiar.

What sets the film apart, though, is Drew's uncommon ambition. There are no fewer than five storylines running throughout the film which only occasionally overlap, and he uses an occasionally dizzying selection of styles to tell them. In addition to writing and directing, Drew also wrote the soundtrack, which he uses to bridge gaps in the narrative and to reveal the history of his characters. His songs act as the Greek chorus to their actions, illuminating the inner lives of the characters whilst also running the risk of turning the film into a series of music videos. Yet the strength of Drew's voice - both musical and authorial - keeps things coherent despite the diffuse focus. It's an approach that could have been indulgent, but it gives the film an individual flavour that distinguishes it from the likes of Kidulthood.

It's hard to single out a single character as the protagonist, but the closest it has is Aaron, played by Riz Ahmed. Aaron is a small fish in a pond full of violent sociopaths, one of whom is his best friend, Ed (Ed Skrein). As Aaron tries to survive on the streets, he winds up having an incredibly eventful week in which he meets and befriends a young prostitute (Anouska Mond) - though their road to friendship proves a rocky one - and winds up having to look after a gun and an abandoned baby. Needless to say, it's all pretty hectic, and that's before you get to the half dozen other characters, each of whom gets their own self-contained story that plays out alongside Aaron's.

With its sprawling cast and interest in depicting the worst deprivations of society, Ill Manors is positively Dickensian, and I don't use that phrase lightly. It's a kind of "Bleak Housing Estate." Like Dickens, Drew uses these extremes to make a very pointed criticism about Britain, though where Dickens used his novels to highlight the need for a compassionate society that takes care of its poor, Drew depicts the way in which a society with a safety net still finds ways to abandon those who slip through it, in turn allowing those people to become prey to the sort of villains that populate his urban nightmare. Through the soundtrack he also places the blame squarely at the feet of the government, who isolate and demonise whole swathes of the population, creating a destructive swirl of hate and fear to help maintain the social order, whilst simultaneously allowing for the disparity between rich and poor to grow ever wider. To quote the title track, "There's no Broken Britain, we're just broke in Britain."

Drew definitely seems to share an empathy with his characters which extends to even the most reprehensible of them. Whilst there are a few cartoonish villains roaming around - including a group of Eastern European human traffickers who wouldn't seem out of place in an particularly hysterical (in both senses) public information film - pretty much every character is given a life and back story. These are related through the stylish and effective musical sequences dotted throughout the film. Considering how nihilistic most urban dramas tend to be, not to mention how bleak and violent the world of Ill Manors is, there's actually a strong vein of humanism running through its centre. Whilst some of the characters are awful people, they are still people whose lives have some inherent value.

Nowhere is this idea more powerfully articulated than in the moments after one character, who has been painted as pretty much the most consistently terrible, dies. As their life fades away, Drew cuts to Super-8 footage of them as a child, seeming to underline the idea that even though this person grew up to commit awful acts, they started out as a smiling child. It's a surprisingly hopeful and optimistic view of humanity - that everyone starts out fundamentally good and that their environment and choices determine how they turn out - which is all the more impactful because of the grime and the dirt from which it emerges.

Not to belabour the Dickens connection, but the film also shares a structural link with the works of that great writer: its plot is full of contrivances and coincidences that beggar belief, at times undermining the seriousness of the message. There's nothing necessarily wrong with that, but considering that the film goes to great lengths to maintain a gritty and often unpleasant aesthetic, it makes moments like Aaron finding the sex worker (Natalie Press) he is looking for as she happens to walk past his flat feel like the hand of the writer at work. The film culminates with most of the major (surviving) characters converging on a pub, and the pay-off to Drew's interweaving is satisfying, but the methods he uses to get everyone there are often clumsy.

Despite the slight hiccoughs in its execution, Ill Manors is an undeniably distinct debut, overflowing with invention and ambition. Some of those ambitions might not be fully realised - though Ahmed is a solid centre and Skrein is an impressively horrible presence, most of the other characters are less impactful - but that doesn't stop the film from being a striking and layered work.