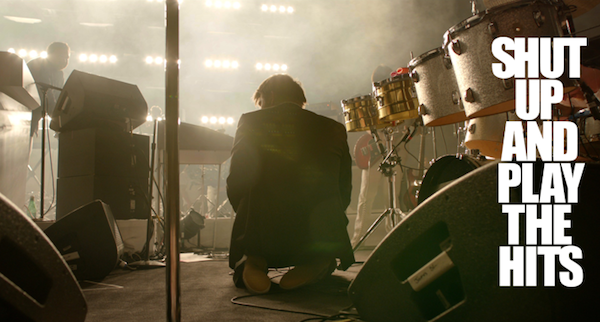 In February of 2011, record-label owner/music producer/John C. Reilly sound-alike James Murphy announced the end of LCD Soundsystem, the critically lauded and fairly popular band that he had fronted for the better part of a decade, and that they would play their final concert on April 2 at Madison Square Gardens. The event was a spectacular final bow for the band and was recorded by film-makers Dylan Southern and Will Lovelace (who also made the excellent Blur documentary No Distance Left to Run), who include some of the performances in their documentary Shut Up and Play the Hits. Rather than being a straight concert movie (though the full concert is being released as a separate work), the film doubles as a requiem, contrasting the glittering excitement of the final show with Murphy's pre- and post-gig anxiety over calling time on something that has been such a huge part of his life.

Shut Up and Play the Hits comes across as a millennial The Last Waltz; a document of both the last performance of a musical act that meant a great deal to a great many people, and of the state of mind of the key creative figures (Robbie Robertson in the case of The Last Waltz, James Murphy here) as they contemplate a world in which they are no longer part of their respective entities. Also, if you want to extend this metaphor to breaking point, please feel free to think of Reggie Watts as the modern-day Muddy Waters (whilst the one area in which Shut Up and Play the Hits truly excels over Scorsese's film is that it boasts the sight of Aziz Ansari crowd surfing and Donald Glover freaking out in the audience, which are both amply meme-worthy expressions of joy).

To that end, it's a film which ends up as three movies occupying the same space as one. Whilst the bulk of the film is taken up with the performances, which are uniformly great, full of verve and brio, the rest is filled with a pre-mortem interview between Murphy and writer Chuck Klosterman, in which the latter probes the former about his mentality the week before the concert, his life before starting the band and his reasons for ending it, and footage of Murphy walking around Brooklyn with his pet bulldog the day after the concert.

Whilst post-concert scenes such as a clearly hungover Murphy ignoring phone calls from his manager or visiting the offices of his record label (DFA) for the first time in a year are often played for laughs, they are the weakest area of the film, and do little to illuminate what Murphy must have been thinking having played the biggest concert of his life. The only moment that rings especially true is when Murphy goes to look at the LCD Soundsystem gear for the last time and, whilst standing in a grey and non-descript storage area, he briefly breaks down. It's the one instance when his emotions burst through the fugue, and its poignancy almost matches the exuberance of the live performances in its impact.

The interview segments are much more interesting, even if, since they are dotted throughout and often play over unrelated footage of Murphy post-gig, they occasionally seem scatter shot and diffuse. Klosterman is an incisive interviewer who seems to enjoy throwing odd or pretentious questions at Murphy, and for his part Murphy is an intelligent, gregarious and lively subject whose fondness for self-examination is amplified by the situation, which is rife with opportunities for contemplation. These interviews also serve to provide a brief and sketchy history of LCD Soundsystem as a band, explaining that Murphy brought together a group of friends so that they could go on tour and perform songs from a record he had already made, explore the no-rockstar bullshit ethos behind the band, and how the decision to end at the height of their success is driven by that ethos, rather than any animosity within the group. There are illuminating digressions in which Murphy talks at length about his love of Thomas Pynchon, his views on art and the notion of legacy, and occasionally touches upon particular songs in his back catalogue.

It's during a discussion of "Losing My Edge", one of the early touchstones of the band's career, that Southern and Lovelace break the otherwise rigid division between the performances and the other sections of the film, filling the instrumental breaks in the song with Murphy's commentary on the inspiration behind it. It's a startling and effective moment that is its most insightful, largely because it combines the performance with something of Murphy's inner life, and provides some context with regards to what made LCD Soundsystem stand out so much in the first place.  There's a great contrast between the sheer joy of his on-stage persona and his more sedate, introspective self in the interview which is more fascinating than almost anything else contained in the non-concert sequences.

It's the concert itself that really stands out, though, and which makes the greatest case for LCD Soundsystem being something special. It perfectly captures the atmosphere of the final hours of LCD Soundsystem, a mix of wake and apocalyptic disco. The film opens with the words, "If it's a funeral, then let's have the best funeral ever" and the performances live up to that idea. Like the great concert movies, Shut Up and Play the Hits gets across not only the sheer fun that the band had on stage, but also the transcendent joy of the fans in attendance, some of whom are reduced to tears by proceedings. The songs are the glue that hold the film together, but as such they ultimately overshadow the other constituent parts, which are good in their own right, but always feel like a slightly flimsy eulogy in comparison to the funeral at the film's heart. For fans, though, that eulogy is a heartfelt and exhilarating send off to a band that meant a great deal, and left before they could wear out their welcome.


*This is indicative of the film's quality in relation to non-fans, who may find a lack of context perplexing. Fans of LCD Soundsystem should bump this up to an A-
By Edwin Davies
Labels: 2012, concert film, Documentary, film, film review, James Murphy, LCD Soundsystem, Music
Newer Post Older Post Home