Doctor Who - Dinosaurs on a Spaceship (S7E02) 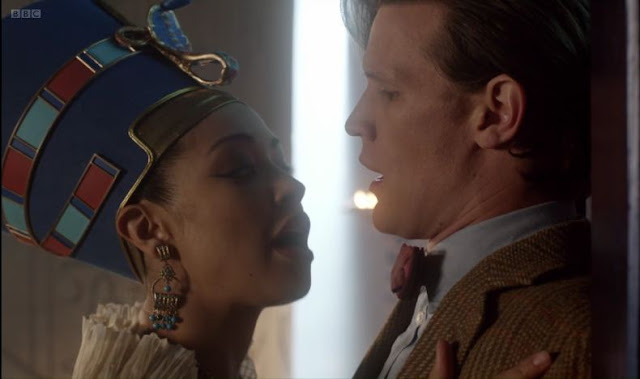 We can say this much for “Dinosaurs on a Spaceship”, it certainly featured dinosaurs, and they were definitely on some form of interstellar transport. Keeping with the traditional structure of following a thematically and dramatically heavy episode with a comparative bit of fluff, this week we saw The Doctor, Amy and Rory (as well Rory’s dad (Mark Williams), a big game hunter (Rupert Graves) and Nefertiti (Riann Steele) because why not?) travelling aboard a mysterious vessel heading on a collision course for Earth. Rather than let the ship be destroyed, The Doctor and his gang get on-board in the hopes of diverting its fatal course, in the process discovering that it is home to dinosaurs, comedy robots and Solomon (David Bradley), an old man who views everything – be it object, animal or person – purely in terms of monetary value.

Back when Doctor Who started in 1963, part of its remit was as to act as educational programming with sci-fi overtones, which was the main reason why The Doctor would keep running into real historical figures and roping them into his adventures somehow. Five decades later, the educational aspect of the show has eroded away to be replaced with a drive to be as purely entertaining as possible – which is a change for the good, in general – but the desire to work real people from history into the storylines remains, even when they serve no real purpose. New Who has been very hit and miss in this regard, with the only real standout historical figure episode being the Charles Dickens-centric “The Unquiet Dead” during Christopher Ecclestone’s tenure in the TARDIS.

“Dinosaurs on a Spaceship” was particularly bad in this regard since the justification for having Nefertiti involved was that she happened to be with The Doctor at the beginning as he was wrapping up an off-screen adventure in Egypt, circa 1334 B.C. Once he discovers that a new problem is on the horizon, he decides to take her along because he thinks that it’d be a good idea to have a gang for once. It’s a minor thing, but in an episode that was already kind of packed with ideas and events, it seemed weird to just cram Nefertiti in there as well. Whilst her playful sparing with the sexist walking innuendo Riddell was funny, it felt like a distraction within an already pretty distracted episode. Maybe she’s going to come back at some point in the future and this was a way of introducing her, but if that was the case then it felt very forced and kind of half-arsed.

But was does that matter if the episode had dinosaurs on a bloody spaceship? Clearly the joy and wonder expressed by Matt Smith when he said the title of the episode was indicative of the exhilaration that credited writer Chris Chibnall and the rest of the crew clearly had getting to realise such an impossible premise, and much of that came through in the program itself. This felt like an episode that was very much aimed at the show’s younger fans, for whom “dinosaurs + spaceship” is an inherently awesome equation. The actual way in which those elements were combined – the ship is an old Silurian ark which Solomon took over years before, which in the process caused the ship to change direction back to its point of origin, Earth, trapping Solomon on the ship – was pretty awkward and slapdash in the way that the wackier episodes of the show tend to be, but the exuberance of it was more or less enough to paper over the cracks in the narrative.

What it couldn’t paper over was the fact that the episode squandered a potentially interesting addition to the world of the show: Rory’s dad, Brian, who accidentally gets taken for a ride when The Doctor picks Amy and Rory up. Even though he had previously been unaware of his son’s exploits across time and space – he thought that they went away after their honeymoon so that they could go backpacking – he found himself thrust into a new and bizarre situation, and more or less kind of got on with it. There was a nice little freak out on the beach (actually the engines of the ship), but it seemed like the show was in too much of a rush to get through everything else on its checklist to actually give Brian and Rory any time together outside of the scenes in which they flew the spaceship (which, since they consisted of Mark Williams and Arthur Darvill leaning from side to side in uncomfortable-looking chairs, highlighted the limitations of show’s effects budget).

Doctor Who has done family stuff in the past, with very mixed results, but I would have liked to see more of Brian and Rory interacting just to get a sense of their relationship. Again, everything felt so busy this week that the human element seemed to get squeezed out, something that became more apparent when it actually slowed down and allowed for a really lovely scene of Brian getting one wish from The Doctor: being able to see Earth from space. It was an unexpectedly sweet moment in which an ordinary man got to experience something truly extraordinary, and as such it stuck out like a sore thumb in an episode that was so busy being busy.

It also stood out in sharp contrast to the other great moment of the episode, in which The Doctor decides that Solomon is too awful to live, and allows him to be destroyed by the missiles which have been launched by Earth’s defences to destroy the Silurian ship. It was not uncharacteristically dark for The Doctor to have to make a life-or-death decision like that, but there was a callousness to it that we haven’t seen in a while, and the episode did a very good job of building Solomon to a point where it became apparent that he was rotten to the core, and perhaps wasn’t worth saving. Much of that is down to the writing, which was all over the place this week but was very sharply focused when it came to making Solomon out to be a cast iron bastard, but David Bradley was also deliciously villainous in a role which required just the right level of malice, which he delivered with aplomb.

- I can see why people might like the robots that Solomon had helping him (voiced by Peep Show actors David Mitchell and Robert Webb) since they had a Douglas Adams vibe to them, but I thought their inclusion was a massive miscalculation. Doctor Who works best when the flippancy of The Doctor is contrasted against the serious and malevolent intent of his enemies. Having enemies which are basically comic relief makes it harder to take the menace seriously.

- I liked that the episode wasn’t about The Doctor saving the Earth, a plot device which the show ran to again and again during the Russell T. David era, since the ship would have been destroyed even if he didn’t stop it, but was about preserving a ship which housed technology and life-forms which were interesting. Nice shift of focus that made the problem of the episode feel important without being – literally or figuratively – Earth-shattering.

- Bit of foreshadowing of The Ponds’ exit this week with their talk of The Doctor leaving them alone for months, potentially slowly removing himself from their lives? As I said last week, I don’t mind that Steven Moffat is taking time to say bye to his own characters, but every time something like that happens I find myself wondering why the show hasn’t made a clean break yet.
By Edwin Davies
Labels: Arthur Darvill, Doctor Who, Karen Gillan, Matt Smith, review, science fiction, Steven Moffat, TV, TV review
Newer Post Older Post Home