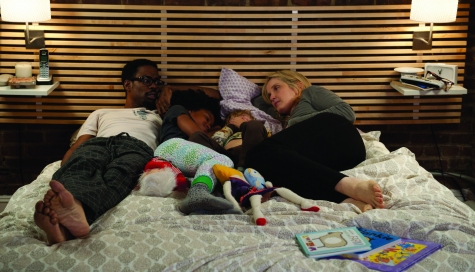 Although 2 Days in New York is a sequel to Julie Delpy’s earlier film, 2 Days in Paris, the director wastes no time establishing that no one needs to have seen the previous instalment to get what is going on in the current one. Within the first few minutes she establishes that her character, Marion, has separated from her husband Jack (played by Adam Goldberg in 2 Days In Paris, but absent here), is now dating Mingus (Chris Rock), a writer and radio presenter with an Obama fixation, and that they live together in a spacious New York apartment, caring for children from their previous relationships.

It’s to the children that Marion is relating this story, via the medium of puppets, in order to explain why her father Jeannot (Albert Delpy) and sister Rose (Alexia Landeau) are coming to visit from France. Fans of the original will know that this can only lead to all sorts of trouble, though the look of apprehension on Marion’s face should clue newcomers in to that pretty quickly. Factor in the (previously unannounced) presence of Marion’s former/Rose’s current boyfriend Manu (Alexandre Nahon) and her father being detained by Customs for trying to smuggle meat and cheese into the country, and it becomes abundantly clear that Marion and Mingus are in for the roughest 48 hours since the last time Eddie Murphy and Nick Nolte begrudgingly teamed up.

Much of the humour in 2 Days in New York comes, as in the case of its predecessor, from the culture clash that emerges when Marion’s ‘60s radical father and reformed nymphomaniac sister meet the man in her life. They do occasionally come into contact with other characters – such as the aforementioned, and funny, moment when Jeannot is forced to strip at the airport to reveal various kinds of sausage strapped to his body – but for the most part, interaction is between the main characters, and the action is largely confined to Marion and Mingus’ apartment.

The tension nicely builds over the course of film as the misunderstandings, playful mockery and underlying resentments of family life bubble up and explode into conflict, conflict made even worse by the fact that all the characters are trapped within the same space. Though there are a handful of big comic set-pieces, much of the humour comes from the astute observations of the script, which is by Delpy, Landeau and Nahon. That bedrock grounds the film during its more outlandish moments, such as Marion’s efforts to auction off her soul as part of an art exhibition (which plays out like a classic Simpsons episode and features a truly bizarre and delightful cameo that I won’t spoil here).

The performers all manage to nail the Woody Allen-esque mixture of neuroses, keenly observed observations and flights of inspired silliness that defines the film. Delpy and Rock are particularly great together as a couple clearly in love with each other, but who don’t seem to have faced any major obstacles up to this point. Their exasperation – with the family and with each other – feels real and adds heft to the gags without weighing them down, yet there is also a tenderness between them that feels comfortable and lived in. There is a connection between the characters that is believable amidst the farce.

The idea of connection forms a major emotional throughline for the film, which stresses the importance of family whilst showing how it can drive people crazy. In between 2 Days in Paris and 2 Days in New York, Delpy’s mother Marie Pillet, who also played Marion’s mother in the first film, died, and her absence is keenly felt. One of the reasons why Jeannot is coming to visit is so that he can see his grandson, but it’s also so that Marion can see how her father is coping with the death of his wife. Delpy also examines what effect the death has on the two sisters, and the way in which their relationship remains unaltered, because they still bicker and fight, whilst at the same time being fundamentally different, because there is now a gaping hole in their lives where there used to be person.

In a moment which is startlingly moving, Delpy addresses the idea of family head on, specifically the idea that each person is born into a family, but eventually has to construct their own to avoid being alone. It reminded me of a line in Michael Chabon’s Wonder Boys, in which a character says that families are meant to get bigger, not smaller, and that simple, honest realisation has a strong emotional punch to it, even amongst the ribald comedy. Even though 2 Days in New York sometimes feels messy and unfocused as it tries to keep all of its disparate elements in play, it ultimately reaches a point of narrative and emotional catharsis that largely makes up for the occasional sloppiness of the journey.