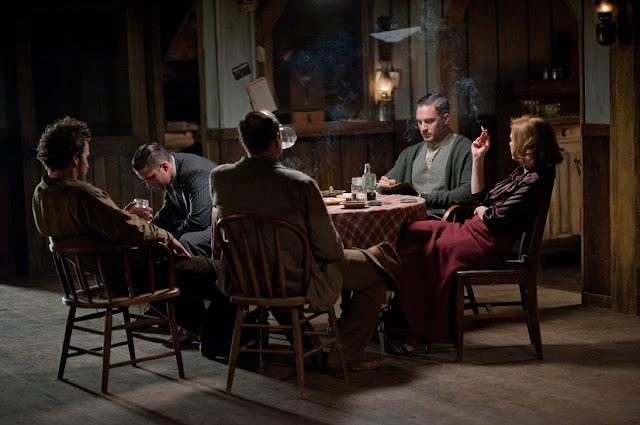 When we think of Prohibition, we think of gangsters. Historically, we think of Al Capone and his ilk building empires on spilt blood and illicit liquor, whilst cinema gives us James Cagney rising to the top, then falling face down in the gutter. These are indelible, iconic images, and it's no surprise that whenever film-makers tell the story of Prohibition, they tell it through the eyes of gangsters; grandiose and tragic figures who strut around in sharp suits brandishing Tommy guns.

What you don't often see are the people who produced the moonshine upon which those empires were built. People who scraped out a hardscrabble existence whilst trying to stay one step ahead of the law. It is in this environment that John Hillcoat's Lawless is set, as it tells the true story of Forrest, Howard and Jack Bondurant (Tom Hardy, Jason Clarke and Shia LaBeouf), three brothers who made moonshine in Franklin County, Virginia for sale in Chicago. Their modest operation is threatened when they refuse to bow to pressure from Charlie Rakes (Guy Pearce),  a psychotic deputy who wants everyone in the county to pay protection money in exchange for being left alone. Reprisals and counter-reprisals follow, as the brothers and Rakes wreak bloody havoc upon each other.

As much as it is a drama about brutal yet charismatic criminals, Lawless is also a film about myths and legends, and the way in which they shape peoples' lives. In his opening narration, Jack relates how Forrest believes the Bondurants are indestructible since he survived both World War I and contracting Spanish Flu, and that belief informs the way in which Forrest and his brothers act throughout the story. They believe that they cannot be killed, and Forrest's belief in his own legend plays as big a part in his decision to stand up to Rakes as any genuine principles he may have. Even his principles are tied up in his image of himself as part of a noble tradition of honourable criminals, and there's a sense that Forrest's laconic attitude when committing acts of horrific violence is as much a product of him behaving how he thinks a criminal should as it is a result of his actual personality. Hillcoat and screen-writer/composer Nick Cave also manage to subtly work in the idea that this self-aggrandisement exacerbates the situation, as evidenced by the almighty beating Rakes gives Jack to prove that the Bondurants aren't the "hard-boiled sons of bitches" that he had heard they were.

As well as the small-scale intimacy of these family myths - which seem to at some points be both debunked and at others embellished by the source material, an historical novel (The Wettest County in the World) written by a descendant of the brothers (Matt Bondurant) -  the film also touches upon broader legends in the popular imagination. In an early scene, Jack watches as Floyd Banner (Gary Oldman), a famous Chicago gangster uses his Tommy Gun to lay waste to a rival's car before strolling away and winking at Jack as he passes. Jack runs into the street and picks up one of the spent shells, which he then gives to his friend Cricket (Dane DeHaan) to complement the news clippings the two collect of Banner's exploits.

Jack clearly idolises this man who so fully embodies the archetypal gangster, and once money starts rolling in from bootlegging, Jack starts to model himself on the gangsters he reads about. As he starts to fancy himself as a big shot, evidenced by his increased confidence when courting a minister's daughter (Mia Wasikowska), the power of that myth becomes more and more apparent. Even when he is posing for photographs, he affects the style of his heroes, brandishing guns or standing with a cigarette dangling lazily from his lips. Like Forrest, Jack starts to form his own image of himself which he then strives to live up to in real life, with both positive and negative results.

Shia LaBeouf is a much-maligned actor, largely due to his involvement in the Transformers franchise, but here he makes a good case that he was bad in those films because the films themselves were terrible, not because he is an inherently awful actor. Put simply, Shia LeBeouf is the best he has ever been in Lawless, which sounds like faint praise but resolutely is not. As the runt of an admittedly feral litter, Jack comes across as wily yet untested, someone who fancies himself a man of vision but has little idea what the family business actually entails. LaBeouf does a great job of putting across Jack's ambition and determination without ever losing sight of his inexperience. When he starts showing up in brand new suits, he manages to look both impressive and ridiculous, which is as much a result of LaBeouf's ability to convey Jack's awkwardness as it is John Hillcoat's ability to shoot it or Nick Cave's ability to write it. It's a strong performance, especially relative to the rest of his work, which suggests there is hope for him yet.

That's not to say that Lawless is a one-man show since the whole cast do great work. The ever-reliable Hardy gives one of his most enjoyable performances as Forrest, nicely balancing the character's easy charm with his obvious, frequently tested capacity for brutality; Jason Clarke is convincingly chaotic as Howard, the angriest and drunkest of the three brothers; and Jessica Chastain is suitably feisty as Maggie, a woman who comes to work for the Bondurants at their family bar who gradually gets drawn further into their world.

It's Guy Pearce who is the true standout, though, as the fastidious and fascistic Rakes. It's a superbly villainous part that manages to be both ostentatious and quietly chilling. Rakes is a deeply unsettling presence who brims with hate, and as intimidating as Hardy is as Forrest, there's something unnerving about seeing the indifference with which Rakes carries out his campaign against the Bondurants. This is saying nothing of how terrifying it is when things don't go his way and he becomes truly unhinged. Charlie Rakes is a great villain who fits perfectly into the heightened, mythic world conjured by the film.

Though it doesn't hit the moody, brooding heights of Hillcoat and Cave's last collaboration, The Proposition, Lawless is a gripping, brutal and thrilling crime drama. Anchored by strong performances, a strong, literary script and buoyed by a wonderful sense of place, it's a hugely enjoyable look at a history so rarely examined. And if you've ever wanted to see people beat the ever-loving shit out of Shia LeBeouf, it's downright essential.