Ante Up: Differing Depictions of Cards in Film and Television 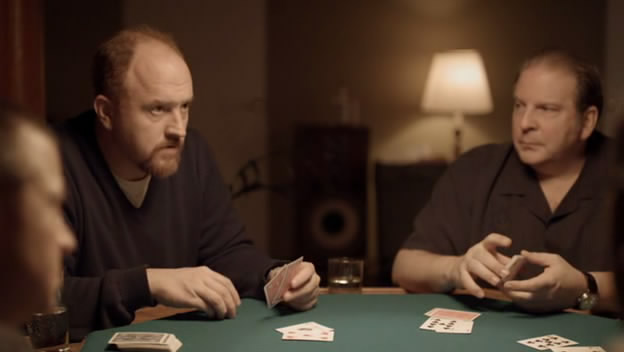 To feed my already fervid anticipation for the third season of FX's Louie - which, so far, has been great - I recently rewatched the first two seasons. Whilst watching the second episode of the show, "Poker/Divorce", I was really struck by how, even though one of the segments of the episode unfolded entirely around a poker game between Louis C.K and his friends, hence the title of the segment, the game itself was completely incidental to the scene.

As writer and director, C.K. doesn't establish who is winning, who is losing, or how long the game has been going on for, though it's easy enough to discern that it has probably been going for some time. The purpose of the game is not to create a visually dynamic or exciting competition, but to act as a means of getting C.K. and his comedian friends to sit together, make fun of each other, then almost imperceptibly shift into darker material as C.K. uses the show to explore his use of the word "faggot" in his stand-up. It's a terrific scene of television, and one of the earliest indicators that C.K. was going to be doing something odd and unique with the show, but it is fundamentally not a scene about poker, but a scene in which people happen to be playing poker.

This speaks to a much broader difference between the way in which poker, and gambling in general, is depicted in television opposed to how it is depicted in movies. There are countless films about poker as a game, and which use the game as a device to move the broader plot along, largely because it's one of the most readily recognisable card games in the world, and because it is perfectly suited for plots about gamblers or con men, two characters that cinema just can't get enough of, and there is something thrilling about watching people play these games. 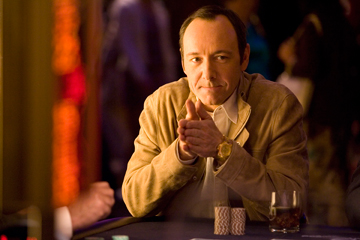 Take, for example, the 2008 heist film 21, in which a team of MIT students use their considerable  mathematical skills to create a card-counting team, with the intention of walking away with hundreds of thousands of dollars by scamming a casino. Though there is intrigue between the characters, particularly between the main character, Ben Campbell (Jim Sturgess), the professor who puts the team together (Kevin Spacey) and the casino head of security (Laurence Fishburne), who cottons on to their scheme, the main thrust of the story is driven by the game of blackjack itself. The scenes in which the team train to implement their scheme, and the ones in which they carry it out in a casino, are shot to emphasise the importance of the game and what each result means for the characters. Individual moves are highlighted so that the audience knows what is happening in each game at any one time so that they can best understand the actions of the characters.

Films like 21, or Rounders, or House of Games place particular importance on the games themselves because they play an important narrative purpose which, in the best of these films, serves to excite the audience and to illuminate something about the characters. There are films which use card games in a more incidental manner, as the scene in Louie does - the most notable example being A Streetcar Named Desire, which features several scenes of Stanley Kowalski and his friends playing cards, and which uses those games to say something about the very masculine world that Stanley inhabits, allowing for a contrast with the femininity that Blanche DuBois brings into the household - but they rarely receive the time or attention Louis C.K. gives to the game on his show.

The time limits of television play a factor in this phenomenon, since it would take a lot of effort to stage and film a particularly involved game of poker, but largely the game is treated this way because it offers a relatively safe environment in which to generate conflict between characters which can reveal something about them (or, as in the case of the Curb Your Enthusiasm episode "The Shrimp Incident", causing potentially career-ending conflict when one of those players is Larry David). It can also act as a means of showing the camaraderie between the players involved, an idea perhaps best epitomised by Star Trek: The Next Generation, a show about space exploration whose very final scene was of its characters sitting around a table playing poker. 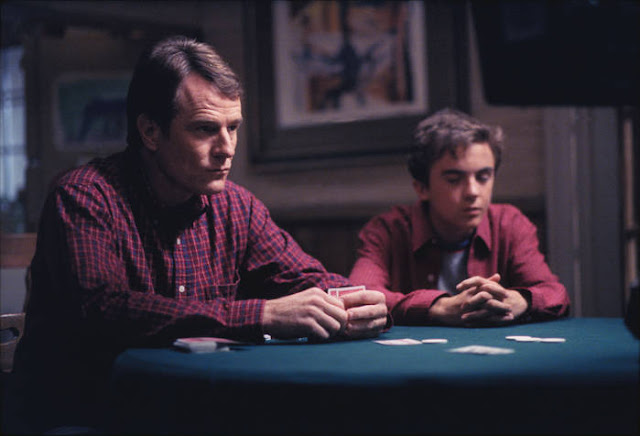 Malcolm In The Middle used a similar approach to Louie in its treatment of card games in the episode titled "Poker", which is, unsurprisingly, about people playing poker. Specifically, it is about two games between the Hal (Bryan Cranston), the patriarch of the show's family, and Abe (Gary Anthony Williams), father of Malcolm's (Frankie Muniz) best friend Stevie (Jonathan Craig Williams). The first game takes place when Abe invites Hal to take part in his weekly poker game with his friends, and Hal feels left out because they have their own pre-established in-jokes and stories that he doesn't get, and because he is the only one of the group who is not a "professional" since he isn't a doctor, a dentist or a lawyer. This leads on to a second game, this time just between Hal and Abe, helped along by their two genius children.

What's interesting about "Poker" is that, whilst the first game uses the same approach as Louie, treating the game as a means of relating something about the characters, the second one actually is concerned with the mechanics of the game, since the plot revolves around Hal or Abe winning the game in order to resolve the conflict that has arisen within their friendship, so the specifics of the game are more important than they were previously. Yet what is ultimately more important is the result of the game, rather than the game itself, since it is the result that will ultimately have an impact on the characters involved.

This is rare in television, since even on shows where the outcome of a game of poker is particularly important to the plot, the actual playing of the game is treated as a minor detail. One of the best episodes of The Sopranos, "The Happy Wanderer", revolves largely around the character of David Scatino (Robert Patrick), a childhood friend of Tony Soprano (James Gandolfini) who winds up accruing massive gambling debts when he starts to play in a game run by Tony's associate, Richie Aprile (David Proval). Owing to the nature of the story, there are lots of scenes that take place at poker games, but the playing is not really depicted, we are only told the result, and then get to see how David's losses come to affect Tony's relationship with him, and the idea that even though Tony tries to stop David from gambling, he ultimately doesn't, and allows his friend to destroy his own life in the process. Here, the game serves a very important narrative purpose which drives the theme of the episode, but the actual playing of the game is not central to proceedings.

The ways in which film and television depict something as simple as a game of cards differ radically, in the process highlighting the different styles of storytelling and production inherent to the mediums. With its focus on characters whose stories begin and end within the space of a few hours, and the need to create a sense of tension and competition, film is perfectly suited to depicting the ins-and-outs of individual games, whilst television's focus on characters whose lives are told over many hours, spread out over years, coupled with the more restrictive time and budgetary constraints of episodic television, mean that TV series are more likely to be concerned with the way in which the game can impact its characters, either by bringing them together or driving them apart, than in depicting the game itself.
By Edwin Davies
Labels: 2012, 21, A Streetcar Named Desire, cards, film, louie, Louis C.K., Malcolm In The Middle, Marlon Brando, poker, television, The Sopranos
Newer Post Older Post Home