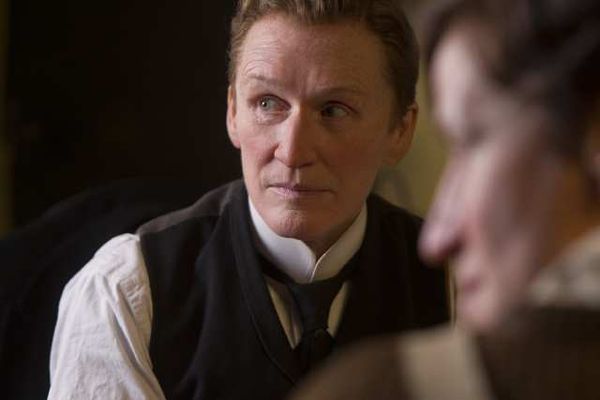 Glenn Close first played the character of Albert Nobbs - a woman pretending to be a male waiter in order to scrape together a living in working-class Dublin - on stage in 1982, and has spent much of the last thirty years trying to bring the story to the screen. Considering the amount of time and effort involved, the release of the film must be something of a personal triumph for Close, who not only stars but also produced the film and, along with John Banville, co-wrote the screenplay. Yet, despite being such a passion project for Close, the resulting film is so devoid of any life or passion that it seems hardly credible that someone would spend so much time trying to get it made in the first place.

The most glaring (though far from only) problem with the film is its visual style. Director Rodrigo Garcia manages to break the story out of its theatrical origins by offering plenty of opportunities for the characters to leave the confines of the hotel where Albert works and explore the film's rendition of Dublin at the turn of the last century, but he also shoots the film in a drab, perfunctory way that is stuffy and lifeless. The film lacks any visual dynamism to break up the torpor of Albert's sad, lonely life as someone living with a secret, even after an encounter with Hubert Page (Janet McTeer), another woman pretending to be a man, shakes "his" worldview. After meeting Hubert, who owns his own painting business and has a wife, Albert starts to wonder if he could have a future as the owner of a small business and settle down with Helen Dawes (Mia Wasikowska), a young maid with whom he has become infatuated.

The story of Albert Nobbs does throw up some interesting ideas about gender identity and sexuality, set against an historical backdrop where those ideas were not discussed openly, but the substance is suffocated at every turn by the style, which turns a story that should be interesting and provocative into something painfully pedestrian. Compounding this problem further is the refusal by all involved to directly engage with the ideas raised by the story. Is Albert a lesbian, or is "he" in love with Helen because he has lived his life as a man for so long that he just wants to complete the image of normality that having a wife would allow him? Close and Banville's script obscures and tip-toes around such questions, but in doing so distracts from the depiction of how Albert maintains the delicate equilibrium of his life, his (genuinely heartening) dream of owning his own tobacconists and escaping his life as a servant. The lack of direct engagement with the possibilities offered by the story makes the film more frustrating than intriguing.

The dryness of the central character might not be so bad if the film-makers had been able to add some colour in around the margins, but the various sub-plots that occupy the other characters in the story are as drab and dreary as Albert's, though they at least benefit slightly from being incredibly blunt and obvious, rather than half-heartedly obscure. Helen meets and falls in love with Joe Mackins (Aaron Johnson, sporting the very worst Irish brogue in a film with a few suspect ones on display), a rogueish bounder who talks about taking Helen to America, then persuades her to respond to Albert's affections in the hope of squeezing money from him to achieve that aim. This plotline inevitably dovetails with Albert's attempts to figure out just who he is and what he wants, but it's relentlessly dour and difficult to care about. That it takes up such a large part of the film makes it all the more interminable.

Both Close and McTeer were Oscar-nominated for their work in Albert Nobbs, and both of them are very, very good, but it speaks volumes about the film as a whole that it was not recognised for anything else other than its impressive make-up effects. It's a drab, dull affair anchored by two performers who are wasted on material that is never allowed to be as interesting as it could and should have been.