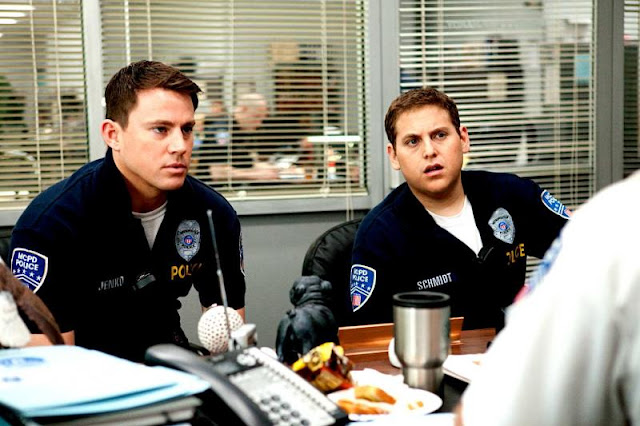 Much as James Bobin's The Muppets sought to make its characters relevant again by trumpeting their irrelevance, 21 Jump Street takes what should be its greatest weakness - that it is an update of a barely-remembered TV series based around an incredibly dumb premise (albeit one that isn't so dumb that real police departments haven't used it in real life) - and turns it into probably its greatest strength. Rather than taking the idea of sending young-looking Police Officers undercover as high school students even remotely seriously, the film's script, co-written by star Jonah Hill and Michael Bacall (Scott Pilgrim vs. The World) seeks to undermine it mercilessly and frequently, using the disconnect between the stupidity of the central premise and how important the characters think it is to great effect.


The tone is set early on when a Police Captain (played by Nick "Ron F***ing Swanson" Offerman) informs Officers Schmidt and Jenko (Hill and Channing Tatum) that they are being re-assigned following their complete and utter failure to conduct a simple arrest. Offerman tells them that the program is an old, abandoned one from the '80s that is being updated for modern times because the people in charge have completely run out of new ideas. In one sentence, the film-makers establish that, yes, they are aware that remaking an old TV show as a film is tired and tacky, possibly even creatively bankrupt, but they are acknowledging and embracing that fact, even if the embrace itself is more of an awkward hug. The ironic detachment of the film is palpable, and whilst it makes for some of the film's best moments, it also represents the greatest obstacle to the film being any good.

Post-modernism of this sort can be very dangerous. As Scream 4 demonstrated last year, pointing out what you are doing only works if there is something more to back it up, otherwise the self-awareness just becomes an empty gesture intended to disguise the emptiness of the film around it. In the case of Scream 4, Wes Craven tried to get away with making an unimaginative slasher film by pointing out how unimaginative everything about it was, creating a film that was boring yet really smug about how boring it was. 21 Jump Street suffers from a similar problem in that it doesn't offer any real insights into either the police procedural or high school genres, but the key difference is that 21 Jump Street doesn't need to provide meaningful critique so long as it's funny. On that front, it succeeds.

Once Schmidt and Jenko have been sent back to school - after some encouraging words from their angry, black Captain played by Ice Cube, who is very aware of what a stereotype he is - the film kicks into gear, firing jokes out at an alarming rate. Directors Chris Miller and Phil Lord display the same kitchen sink (as in: "everything but the", not "realism") approach to the material that they brought to their previous film, the shockingly hilarious Cloudy With A Chance of Meatballs. Though much of the humour in the film comes from the interaction between Hill and Tatum, Miller and Lord's background in animation serves them well, as they try to cram in jokes wherever they can. They also manage to mimic the mannerisms of action movies nicely, making for such fun satirical set-pieces as a high-speed chase in which the two partners are constantly surprised when things that should explode, such as a gas tanker, do not, whilst others that shouldn't, do. The verve that they bring to the editing and visuals nicely complements the script, ensuring that the film moves at a brisk pace and never gets bogged down in dialogue the way that lot of post-Judd Apatow American comedies tend to do.

In fact, they occasionally mimic the mannerisms of acton films too well, which leads to the biggest problem the film has: the need to make the action sequences look cool. It's hard to make something look both awesome and funny since the two responses are somewhat counterintuitive, and the film is at its best when it is content to either make chase sequences look awkward and embarrassing, or to make incredibly banal things look impressive. When the film moves into its final act, when the kingpins behind the drug that Schmidt and Jenko have been sent to investigate have been uncovered and they need to become badasses to save the day, the film shifts to making awesome things look awesome, which is inherently unfunny. Considering the entire final act is pretty much just one, overlong action sequence, that shift causes the film to drag in a way that it doesn't for the rest of its running time.

Considering that the film is a good twenty minutes longer than it needs to be, this makes the film end on a somewhat muted note - though I will admit that this may be the only time in history when the definition of "muted" encompasses having someone attempt to pick their own severed penis up with their mouth - that detracts from the solid eighty minutes of comedy that preceded it. That aside, 21 Jump Street is a surprisingly funny action-comedy that, whilst veering too much towards the former half that equation towards the end, has ample amounts of the latter.