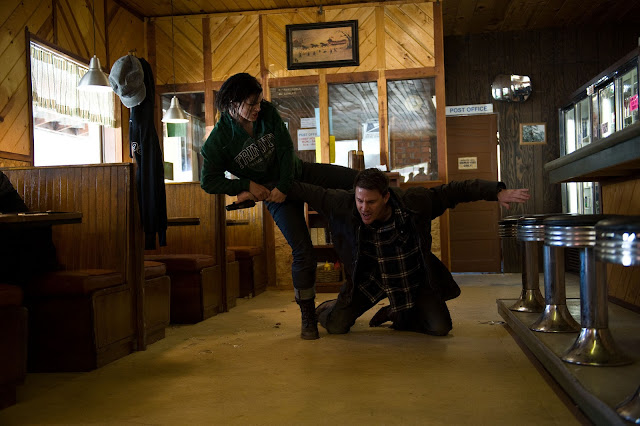 As he hurtles towards 50, the age at which he claims he will retire, or at the very least will take a prolonged break, from film-making, Steven Soderbergh seems intent on burning through as many genres as possible. The already prolific director, who has made 25 feature films in 23 years, will have released three films in the space of twelve months before this year is out, all of which are radically different. Contagion was a stark and bleak look at what could happen in the case of a cataclysmic pandemic, the forthcoming Magic Mike is a comedy about a male stripper played by Channing Tatum, and the recently-released Haywire is an action-thriller that, on the surface at least, seems pretty standard.

The plot of Haywire is so basic and well-worn that there are tribes in Brazil who could transcribe it beat for beat after only the first reel. After being betrayed by the agency that employed her, a covert operative (Gina Carano) sets about getting even by beating the living tar out of the men she used to work with, all in the hope of finding out why she was betrayed in the first place and who was behind it.

So the premise of Haywire is about as boilerplate as you get when it comes to spy movies, particularly thrillers, since the films in that particular sub-genre are almost always set off by a betrayal - spies are rarely the most trustworthy types - and involve a globe-trotting hunt to try to figure out who was responsible. The Mission: Impossible series has used a variation on this theme many times - most recently in the hugely enjoyable Ghost Protocol - as has the Bourne series, not to mention countless B-movies and straight-to-video thrillers. The Bond series, to an extent, also uses this trope, and Haywire feels very much like a gender-reversed Bond film for most of its running time, particularly in the way in which Mallory slowly pieces together clues as to who her enemy is in between action scenes, as well as in her dealings with government agencies (represented by Michael Douglas) whose motives seem questionable. A lot of elements of the film are pretty well-trodden.

What sets it apart, though, is Gina Carano, both from a gender perspective - her character, Mallory, spends most of the film beating up characters who represent various images of masculinity (the lunkhead, the suave secret agent, the jealous former lover) giving the film a somewhat subversive edge - and because her physical abilities allow the film to do things that most action movies can not. Carano's day job is as a Mixed Martial Arts champion and American Gladiator and Soderbergh discovered her one night whilst watching television, deciding then and there to build a film around her.

Carano's background in MMA means that she can handle her own stunts, completely free of wirework or CGI, in a way that many traditional action stars can't do or are not allowed to do. Her physicality allows Soderbergh to fully exploit one of the key tenets of action cinema: it is far easier to care about a character's life being in peril if we can actually see them doing the perilous stuff. Carano is not a particularly strong actress, so Soderbergh and his writer, Lem Dobbs, restrict her performance to an icy, detached professionalism in all the dialogue scenes, allowing her character to express herself in the fight scenes, albeit less through traditional acting techniques than by kicking Michael Fassbender through a glass door. They also wisely cast ringers like Fassbender, Ewan McGregor and Antonio Banderas in most of the major roles, nicely dividing the acting and action sides of the film up and giving them to the people best equipped to handle them.

What's particularly interesting about the potential freedom offered by Carano's physicality is that Soderbergh chooses to restrict his camera, favouring almost static framing so that the fights can unfold as fully as possible in relatively few shots, very pointedly choosing not to use the hyper-edited style in vogue with most action movie directors. (A phenomenon often referred to as "Chaos Cinema" and which is explored very nicely in this video essay by Matthias Stork.) Even though I think that particular style can be very effective and powerful in the right hands - the two films in the Bourne trilogy directed by Paul Greengrass leap to mind as exemplary demonstrations of its potential - there is something quite endearing about seeing a film take a more composed and deliberate approach to action scenes without completely abandoning the need to make them exciting. There is a real tension to these scenes, both thanks to Carano and the choices by Soderbergh, that you don't find in, say, the Transformers films, which never show you enough of the action for you to invest in it or the characters. Here, you see every punch and kick and Haywire lets you feel the impact.

Whilst it has too many major flaws to be really great, Haywire is exciting and propulsive entertainment that is, much like pretty much every film Soderbergh has made to date, interesting. If he is serious and does decide to step back, even if only for a short while, cinema will get that little bit duller.