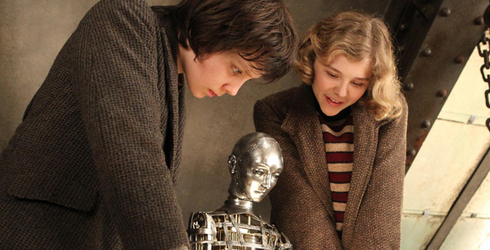 Martin Scorsese loves cinema. This is pretty much indisputable. Ever since he was an asthmatic youth who fell in love with figures dancing across a shimmering screen, and all through his career as one of the world's greatest film-makers, that obsessive passion has guided and shaped his best films. Even outside of his directorial work, he has forged a second life as a champion for film preservation, establishing The Film Foundation and overseeing the restoration of such great works as Peeping Tom and The Red Shoes. Few can lay claim to have done more to promote the transcendent power of film than Scorsese.

Sadly, despite his obvious and heartfelt passion for cinema, that passion largely fails to come across in his latest, Hugo, a strangely clinical adaptation of Brian Selznick's superb Caldecott Medal-winning children's book The Invention of Hugo Cabret. This is doubly strange considering that Hugo, whilst initially a Roahl Dahl-esque story of a young orphan who lives in a train station, gradually reveals itself to be a tribute to the earliest days of cinema. It's the sort of story that Scorsese should be able to knock out of the park with consummate ease, but there is a big difference between being passionate about something and that passion appearing onscreen.

Set in Paris in the early 1930s, the story of Hugo begins when the titular character (ably played by Asa Butterfield) is caught trying to steal a toy mouse from the shop operated by Papa Georges (Ben Kingsley). As punishment, Georges takes a notebook from Hugo that contains sketches of a clockwork automaton designed to look like a man. When Hugo refuses to explain where he got the book from, Georges says that he must have stolen it, and that he is going to burn it. The truth is that the book belonged to Hugo's deceased father (Jude Law) whose death in a fire is responsible for Hugo now having to live within the walls of the train station, where he steals food to stay alive and winds the station's clocks, a job which was previously performed by his absent, drunk uncle (Ray Winstone), all the while trying to avoid the attention of the station master (Sacha Baron Cohen) who roams the station floor, catching stray children so that they can be sent to the orphanage.

In a state of considerable dismay, Hugo meets Isabelle (Chloë Grace Moretz), Georges adopted daughter. The two become friends, going to the cinema and talking about books, until Isabelle asks Hugo what is so important about the notebook. Hugo, after some prodding and the discovery that Isabelle wears a necklace that holds a curious heart-shaped key, shows Isabelle the reason he has been stealing toys from Georges; the automaton that is in the notebook, which his father discovered in a museum and was trying to fix before he died. Hugo has been stealing the toys so that he can take their parts and use them to replace the ones missing from the automaton, which he secretly hopes will use the pen it holds in its hand to write some secret message from his dead father once it is finally fixed. The two children then set about trying to unravel the mystery of the automaton, which only reveals further mysteries that eventually lead them to Papa Georges. Or, to give him his full name, Georges Méliès; magician, artist and pioneer of early cinema.

The main problem with Hugo is its pacing, which is wildly uneven. The first half of the film, which is really all that I have described in the last few paragraphs, drags interminably, as first the audience discovers everything about the life of Hugo Cabret, then exactly the same information that has just been revealed is relayed anew to Isabelle before the film can even get to the series of mysteries that leads it from being an adventure film to a love letter to cinema. It's clear that Scorsese's interest really lies in the second half of the story, when he gets to recreate the films of Méliès and pay homage to some of the greatest silent films ever made by actually including pieces of them in the film, but the end result is that the first half feels meandering and ill-disciplined, spending too much time focusing on subplots involving the lives of people in the station (played by Emily Mortimer, Richard Griffiths and Frances de la Tour). Whilst the subplots are perfectly nice, they distract from the main story without adding much, apart from some very fine moments of awkward comedy from Sacha Baron Cohen, whose presence injects much needed energy.

Things pick up markedly once the film moves into its superior second half, but it winds up at odds with itself. Whilst there is an undeniable thrill to seeing A Trip To The Moon, Intolerance, The General, Safety Last! and many other classics on a big screen, and in seeing the ways in which Scorsese weaves allusions to those films into the fabric of his own, it does so at the expense of the characters. Hugo and Isabelle, who are established as precocious, likable characters in the first half, are pretty much shoved aside for a long lecture on film history and the importance of film preservation, only to be brought back in to give the film a happy ending. It makes the overall experience lumpy, with each individual section working fairly well, but never feeling like a cohesive whole. It also doesn't help that it comes out in the same year as The Artist, which is every bit as heartfelt a tribute to silent cinema but it manages the same trick with greater wit, energy and genuine, unrestrained joy than Hugo manages in even its best moments.

Technically, the film is a marvel, with the realisation of Paris and the recreation of Méliès' studio being particularly great. However, it all feels hollow and a lifeless; like the automaton at the heart of its story, Hugo is a collection of parts that work together to give the impression of life, but it is ultimately just a mechanism. There are some great, startling moments in the film, most of which come courtesy of Kingsley, who overcomes his tendency to overplay every moment to give a restrained, dignified performance, and Hugo isn't a bad film, it just isn't great. When you consider the man who made it, and the overwhelming love he feels for the subject matter, being merely good enough isn't really good enough.