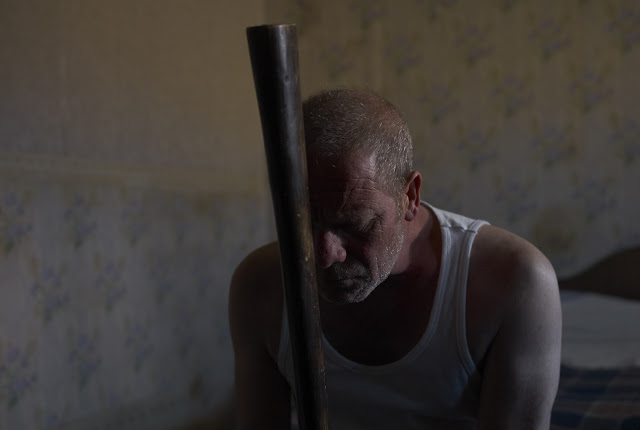 Going by the opening scene of Tyrannosaur, the debut directorial feature of actor Paddy Considine (Dead Man's Shoes, Hot Fuzz, The Bourne Ultimatum), in which its main character beats his beloved dog to death, it would be all too easy to dismiss it as yet another example of miserablist kitchen sink drama that British cinema so often produces. After Joseph (Peter Mullan) gets drunk and angry, he kicks his dog and breaks his ribs. It's devastating for Joseph, and after an outburst in a pub (one of many manifestations of his barely suppressed rage that, it is implied, has landed him in trouble before) he runs into a charity shop run by Hannah (Olivia Colman) and begins to cry when she offers to pray for him.

These scenes suggest it would be easy to make snap judgements about these characters and their situation, but one of the great strengths of Considine's film is that it fills in the blanks, turning these seemingly easy to define characters into real people over time, making their relationships feel real, rather than contrived. As they get closer and develop a real friendship, the broadly drawn ideas that they were at the start fade away to reveal two essentially broken people who gradually realise that they need each other to become better people, even if the path to becoming a better person will be very difficult indeed.

Nowhere is this broad approach truer than in the case of Hannah's abusive husband, James (Eddie Marsan), who is introduced when he comes home, discovers Hannah asleep on their sofa, and pisses on her. It's about as clear a statement of his character as it is possible for the film to make; he is a despicable, awful human being. However, rather than just have him be overtly brutal and cruel to Hannah, the film takes time to depict the more insidious ways that he maintains control over her; the false contrition, the eerie smile and the declarations of love. Whilst James is the undoubted villain of the piece, he is a nuanced villain, and the film does a wonderful job of illustrating the pitiable qualities that would make someone like Hannah, who is a thoroughly decent person, stay with him. Colman also delivers a staggeringly powerful performance as a woman whose spirit has slowly been broken over a long period of time, yet who still manages to find the good in people.

That nuance and richness are what make Tyrannosaur stand apart from so much of British cinema, and which ultimately make it feel fresh despite the overly familiar territory it treads in its themes and setting. Unlike Nil By Mouth or NEDS, Considine's film has a lightness of touch to it that, rather than undermining the darkness of its central storyline, adds much needed contrast; the moments of light make the shadows even darker. There are several scenes in the film, most involving an Irish friend of Joseph's, that are genuinely hilarious and they give the film a more honest feeling than the unrelentingly bleak fare to which it will inevitably be compared. It also adds verisimilitude to the relationship between Hannah and Joseph. Despite the tension that exists between them at the start, they develop a warm rapport over the course of the film that is so powerful that, even though he is a man capable of terrifying anger and violence, Joseph becomes the only person she trusts and with whom she feels safe and it feels completely natural that that would be the case.

The same is true of the audience's relationship with Joseph; despite starting the film at his absolute lowest ebb and presenting an unsympathetic figure, the sheer force of Mullan's charisma and the charming relationship he has with Hannah turn Joseph into someone we root for, even though the things that we root for him to do are just as horrible as the act of slaughter that opens the film. It's a delicate balance, but one that Considine and his cast manage beautifully.

As a director, Considine gives the film a look and feel that is incredibly cinematic. Tyrannosaur never feels cheap or hurriedly put together but like a film that has been painstakingly crafted. Every frame is considered and apt, the use of music perfectly complements the melancholy tone of the film, and there is a richness to the visuals that make the urban settings feel evocative rather than utilitarian.

Tyrannosaur is not a perfect film; the scenes between Colman and Mullan are fantastic, but they are so good that they overshadow the scenes they have with the other actors (with the exception of Marsan) which feel airless in comparison. The scenes between Joseph and his dying friend, in particular, have little impact because the character is barely introduced before he is killed off, and in retrospect they seem like calculated attempts to create a means by which Hannah and Joseph can meet outside of her shop. There's an artificiality to them that doesn't sit well with the natural way in which the rest of the film progresses. Aside from that, Tyrannosaur is an assured debut with great performances, a compelling story and moments that are really devastating.