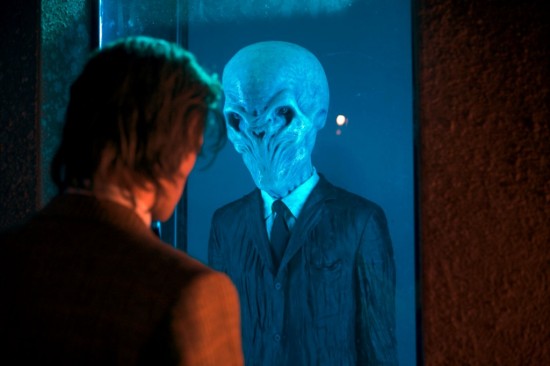 As much as I have enjoyed this series of Doctor Who, there always seemed to be something slightly off about it. Not necessarily something bad, although there were elements of it that didn't work, but just...off. Not quite right. Splitting the series in two, airing the first seven in the Spring and the last six now didn't help, since it threw the rhythm of the show off completely, requiring it to have two finales in the space of thirteen episodes instead of just the one. When I say finales, I don't just mean cliffhangers, because the show has done two-parters before (with mixed results), many of which take place in the middle of the series anyway.

What I'm talking about is that sense of a building narrative reaching a crescendo in the last episode. All that drive and build was present and correct in the first half of the series, which boasted some really fine episodes indeed, but largely absent from the second half. Rather than the usual mix of standalone episodes with a bit of serialised narrative thrown in for good measure, it felt as if Steven Moffat and his team had shoved the serialised elements in the first half and left all the standalone episodes for the final six, creating a weirdly disjointed feel to the show. It also meant that there was no real build up to the actual finale, with only "Closing Time" and its talk of The Doctor going on a farewell tour serving as the foundation for the finale. Going in, I wasn't entirely sure how Moffat was going to reconcile the fractured arc of the series into a satisfying finale.

Initially, resolution seemed to be the last thing on the show's mind, as the episode began by showing us a version of London that is like ours, but ever so slightly (okay, completely and utterly) different. Cars travel through the skies attached to balloons; children run through parks chased by Pterodactyls who, signs inform us, are pests; and Charles Dickens is being interviewed on BBC Breakfast talking about his plans for a Christmas special that will involve ghosts from the past, the present and the future all at the same time. (Moffat's version of Doctor Who has been fairly light on self-reflexive humour, but I did like that as a  reference to the hype surrounding each Doctor Who Christmas special. It was also nice of Simon Callow to come back for a one-joke cameo like that.) It was a weird and disorientating opening that initially made me wonder if the show had gone completely crazy.

Then, it turns out that Winston Churchill (Ian McNeice) is Emperor of the Holy Roman Empire, and that he has just got back from a visit to see Cleopatra. We're in full on Wonderland territory now as Churchill remarks on the fact that the clocks have not moved from 5:02 on April 22nd, and that they never have. He calls for the Soothsayer, a man who has apparently been talking about the idea of time being broken for a while and it turns out to be...The Doctor! (Who else?) In a Toga! With a beard!  He begins to relate a story to Churchill, one that begins with him desperately trying to figure out why he has to die and learning that he plays a central role in The Silence's prophesy; one day, a question will be asked, and if it is answered, the universe will end.

Very oblique, as most of the mythology surrounding The Silence has been, but it's enough to spook The Doctor into shirking his responsibilities and going on his farewell tour, trying to put off the inevitable because, well, he has a time machine, so if he chooses not to arrive at the time and place of his death then he doesn't have to. This comes to a screeching halt when he tries to phone Brigadier Lethbridge-Stewart, only to be informed that he has died. (Which doubled as a lovely tribute to Nicholas Courtney, the actor who played the Brigadier and who passed away in February.) Realising that everything ends, he heads to the lake, prepares to face his fate, sees that it is a young version of River Song in the Impossible Astronaut suit, prepares to die and...doesn't. River stops herself from killing The Doctor, and in doing so causes time to collapse in on itself, creating the version of the London we saw at the beginning, a place in which all of history is happening at once.

This is all pretty dense stuff, but like the best of Moffat's work, it balanced its denseness with a sprightliness that  prevented it from getting too bogged down in the details. Once it was established that the alternative world only exists because The Doctor is alive and that the only way he can die is if he meets River Song and convinces her to kill him, the episode sets up an interesting examination of what it means to be noble and heroic. Not only must The Doctor make the ultimate sacrifice to save the universe, but River must also consent to killing the man she loves most in the world, which she eventually does after a hasty marriage ceremony overseen by River's parents, Amy and Rory.

Oh yeah, Amy and Rory came back (this was a packed episode) and they got to strut around wearing cool black outfits and killing The Silence, who were also back and, as ever, were incredibly creepy. Their involvement in the story felt somewhat rushed, but that's only because the episode itself was barrelling along at such a pace by that point, building up to the crucial moment in which The Doctor must choose to live or die, that I didn't really notice. Like the best Doctor Who episodes, "The Wedding of River Song" swept me away on a rush of pure fun and adrenaline that is rare in most television.

Ultimately, after sharing their first kiss as man and wife (or whatever the Time Lord equivalent term is) they are placed back on the side of Lake Silencio, Utah, and River kills The Doctor...or does she? No. Obviously. Turns out that The Doctor made a deal with the Teselecta (the rubbish shapeshifting robot from earlier in the series) so that they would take his place; a Doctor would die on the side of that lake, but not The Doctor. After a scene in which a time travelling River Song informs her mother and father that The Doctor is still alive, we see The Doctor talk to Dorium Maldovar, the blue-skinned merchant who had told him of The Silence's prophesy at the start of the episode. He says that he had to fake his death because he had gotten "too big, too loud" and that it's now time for him to step back into the shadows.

It's hard not to view that scene as Moffat stating his feelings about the show and its future. Dorium says that the question that must never be answered is "Doctor, Who?" which can be read as meaning that The Doctor is going to have to make a choice that will determine what kind of person he is, but it also speaks of an identity crisis within the show itself. Perhaps the show has become too big and loud, too dependent on big story arcs and less focused on telling small, interesting stories. It still does them, and it does them well, but maybe placing The Doctor in a situation where he has to work in a more secretive manner is Moffat's way of re-centering the show, making it less about spectacle and more about story and character.

Who knows? There is still the matter of The Silence's prophesy to deal with - which, with it's talk about the Fall of the Eleventh sounds like it won't occur until Matt Smith leaves the show - but I'm hoping that it will be put on the backburner and we'll get more episodes that work as individual capsules, because even though this series felt awkward and uneven, there were some great standalone episodes; "The Doctor's Wife", "The Girl Who Waited",  and "The God Complex" were really terrific hours of television that shows what the show can do at its best. I hope that speech is an acknowledgement that Doctor Who, at heart, is a show about interesting small stories and not grand narratives.

I also hope that the Christmas special this year doesn't completely suck balls.