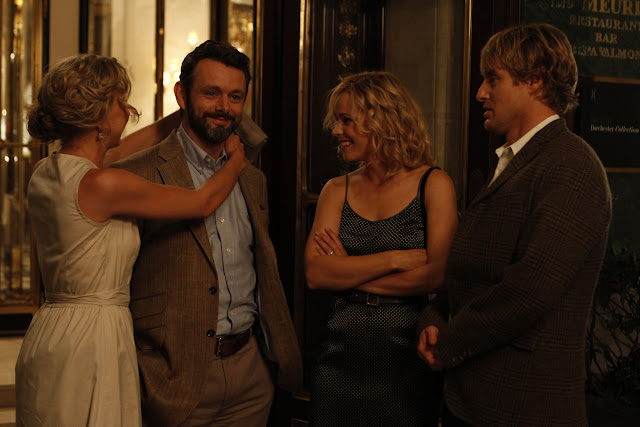 The most important thing that needs to be said about Midnight In Paris, the latest film from Woody Allen, is that not only is it a very good film, but that it is a very good film outside of the context of its creator's work. For much of the last decade critics have described some of Allen's films as good or as returns to form, but what they really mean is, "Well, it's better than the last thing he did." Considering that the last thing Allen directed was the lazy and half-baked You Will Meet A Tall Dark Stranger, the bar was admittedly set pretty low, but Midnight In Paris is not just better than the last film he made, it's easily the best film he has made since Sweet and Lowdown in 1999.

The story finds Allen in one of his occasional whimsical moods (as in films like The Purple Rose of Cairo or Zelig), when he chooses to base his films around a fantastical conceit that he plays incredibly straight. Owen Wilson plays Gil Pender, a Hollywood screenwriter who is on a trip to Paris with his fiancee (Rachel McAdams) and her parents (Kurt Fuller and Mimi Kennedy). Gil's had some success writing films, but he wants to do something worthwhile and is hoping that Paris will provide him with the inspiration needed to finish his novel.

One evening, having left his fiancee with her pompous and arrogant friend Paul (Michael Sheen, on typically fine form) he stumbles across a street corner where, every night at midnight, a car from the 1920s appears and whisks his away to the Golden Age of Paris, when Ernest Hemingway, F. Scott Fitzgerald and Pablo Picasso wandered the streets of the city, loving, fighting and creating great works of art. Gil is given the opportunity to meet his idols, in the process learning that even the greatest artists in history struggled with the same fears and anxieties that he does.

For much of its running time, Midnight In Paris plays out like a culture clash comedy in which Gil gets to experience life during what he considers to be the greatest period of Paris' history, and his interactions with the historical figures he encounters create the film's best moments. (A discussion with
Luis Buñuel about The Exterminating Angel, in particular, is probably the most highbrow joke to ever reduce me to fits of giggles in a cinema.) It also at times feels like an overly romantic vision of Paris, particularly during an opening montage of scenes of the city that seems to go on for half the length of the film, but that is consistent with the dreamy-eyed romanticism of Gil's character. Allen clearly loves getting lost in the streets of the city as much as his character does, and it's thematically consistent to have Paris depicted in such a rose-tinted manner given the film's examination of the dangers of nostalgia.

Corey Stoll is the standout as Ernest Hemingway, who he plays as the most extreme version of Hemingway imaginable; A man who speaks entirely in terse, clean prose, is constantly talking about the dignity of death and the release of sex, and who goes instantly from joking to shouting, "Who wants to fight?" I don't know if that is what Hemingway was really like, but the film is not concerned with a realistic portrayal of these historical figures but in depicting them as Gil would have liked them to be. Adrien Brody also has a small but hilarious role which I shan't reveal, but which will have you reconsidering Rhinoceroses for some time afterwards.

What sets Midnight In Paris apart is that it understands what a lot of time-travel movies don't; That there is something essentially sad and poignant about wanting to live in another time, of believing that you were born too late and that you'd have been happier if you could go to a time that seems, in retrospect, more exciting and vibrant than your own. It's a fairly simple message to say that it is part of the human condition to feel out of place and to romanticise the past, but its simplicity only makes it more profound. Rather than have the film be about how much better the past is and embracing nostalgia, Allen turns his back on the concept, saying that no era is perfect, no age is golden, and that if art is to evolve it needs people to look ahead and try to make something that is true and of its time. It is strange to think that Allen, at the age of 75, has made one of his most vital films, one that offers a real insight into the nostalgia-obsessed contemporary culture that he usually seems so separate from. Then again, the man is a genius when he wants to be, and it is wonderful to see him looking forward, rather than getting lost amongst old ideas as he has so often done in the past.