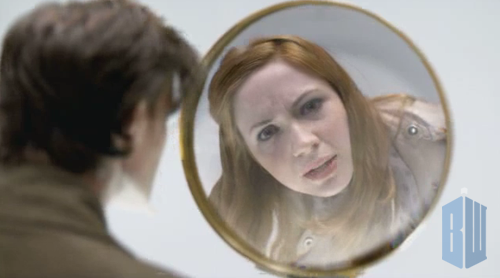 Apologies for this being a week late, but I've been on holiday and forgot to ask Neil to cover for me. Oops.

The Doctor, Amy and Rory arrive on the number two holiday planet in the universe - not number one because everyone goes there - only to get divided when they accidentally enter two separate time streams that run at different speeds. Rory and Doctor are in the slow lane, but Amy is in the fast lane, and once The Doctor and Rory manage to reach her, she's not that Amy they knew. She's spent 36 years surviving in sterile, white hell, dodging the creepily friendly medicinal robots that run the place, intent on injecting her with a cure for a disease that has ravaged the planet (but which only has an effect on two-hearted beings like the denizens of the planet and The Doctor) but which will kill her.

Of the elements that I really liked in this episode of Doctor Who, of which there were fewer than usual, the relationship between Future Amy, Rory and Present Amy - who manages to join up with everyone by doing, of all things, the Macarena - was the strongest. The first scene in which Future Amy meets Rory and Karen Gillan, under some pretty decent jowly make-up, conveys the decades of pain and abandonment she felt was really powerful, and it reminded me of the harrowing scenes in The Doctor's Wife in which Amy encounters an ever aging, ever more bitter Rory. Once all three of them got together and they were eventually forced into a situation where only one Amy could survive, it gave the show one of its more interesting dilemmas; can two versions of the same person exist in the same place at the same time? The answer was no, and the moment when The Doctor and Rory chose to save Present Amy, dooming Future Amy to die and then be rewritten from history was one of the darker, odder choices the show has ever made. One of their best, too.

Outside of that, though, the episode was one of the weakest of the current run. A lot of the usually dependable elements were there; a smart script, good performances from the central three and a clever time-bending conceit. Yet there was an emptiness to it all. It all seemed very cold, which was really out of place considering how much emotion writer Tom McCrae's script could have wrung out of the central concept. Most importantly, it felt like an episode that was completely separate from the thrust of the rest of the season to date.

A minor complaint I made about Night Terrors was that, despite their having lost their daughter to a bunch of kidnapping cult members, Amy and Rory didn't seem that bothered about it, something that proved doubly weird when the episode so heavily revolved around relationships between parents and children. I was informed afterwards that apparently that episode was originally intended to be broadcast in the first half of the season, which actually would have made more sense, narratively, since it could have acted as foreshadowing, rather than as a jarring shift in focus and tone. Whilst I still think shifting the episode, or doing so without working in even a token reference to their MISSING DAUGHTER, was a weird choice, I can live with it because the episode itself was kind of creepy, and I assumed that there would be further movement on the whole traumatic kidnapping thing soon.

In fact, rather than getting any reference to missing baby Melody Pond, we got an episode about an old and lonely Amy Pond, who seemed more concerned with the fact that she was forced to grow up on her own without either of the men she loved than that she didn't ever get to see her daughter again. I don't know if this episode was shifted in the running order as well, but if it was then it's another disorientating decision, and if it wasn't then it's downright bizarre that there was no mention of Melody, because it had the exact perfect plotline to develop that theme.

I don't know quite what is happening with this season of Doctor Who, but I'm hoping that they manage to wrap everything up in a reasonably satisfying way in the next three episodes, because since it came back it has felt weirdly unfocused. It's almost like they stuck all of the episodes that were linked together in the first half of the season, then put all the standalone ones in the second half. After the drive and precision of that first seven, the current batch seem aimless and without much purpose. That would be fine, I suppose, if there hadn't been such a sense of a growing narrative in the first half. The contrast between the two is really astounding to me.

I still love the show, and I enjoyed the episode as a solid, well-made forty-five minutes of television, but I also think that it is adrift at the moment. Steven Moffat's first season as showrunner was tightly plotted, wildly imaginative and fiercely clever. His second still has the latter two elements, but is missing the first, and as such watching it this year has been a frustrating experience. A fun one, but a frustrating one.