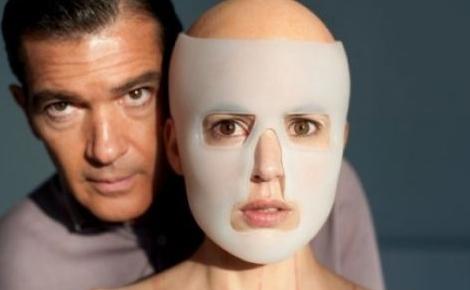 Pedro Almodóvar's latest film, The Skin I Live In (La piel quo habito), is a brilliant example of a gearshift movie. For those unfamiliar with the term, it was coined by Paul Thomas Anderson, director of Boogie Nights, Magnolia and There Will Be Blood, to describe films that start off as one thing, then suddenly change into a completely different kind of movie partway through. (A textbook example of this would be Psycho, which starts off being about a young woman who steals money from her employer, then shifts into something else.) When done well, gearshift movies can be wonderfully unnerving experiences for an audience, as they upend their expectations of where the story was going by sending it off in a completely new direction. They're also almost impossible to review, because you can't discuss the film as a whole without giving too much away.
In the interest of preserving the film's surprises, I will talk only about its great first half in detail, and vaguely refer to its superior second half. Incidentally, I don't consider revealing that the film changes halfway through to be a spoiler, because the fact that it changes is pales in significance compared to how and why it does, both of which I will keep hidden.

Almodóvar reunites with his erstwhile muse Antonio Banderas after a gap of twenty-one years to tell the story of Robert Ledgard, a brilliant plastic surgeon who lives alone, apart from a few servants, in a vast mansion which also doubles up as his clinic. The only patient currently in residence is a young woman named Vera (Elena Anaya) who is being held captive in her room with books, an intercom and a dumb waiter her only connection to the outside world. Robert patches Vera up after she tries to slit her wrists, in the process revealing to the audience that he has been using her as a guinea pig for experimental skin grafts, in which he uses illegal "transgenesis" techniques to make her skin harder and more durable. If that wasn't sinister enough, there seems to be a deeper reason for her being in his house, beyond her role as a test subject, and tensions between the parties involved rise to the surface when the son of Robert's housekeeper (Marisa Paredes) shows up and fundamentally alters the dynamic between Robert and Vera.

That's about as far as I'm willing to go in terms of the plot, because the film really kicks off from that point, so let's talk in very general terms. Stylistically, the film is very much in keeping the more emotionally mature works Almodóvar has been making since the late '90s. His camera glides across the screen like a swan through water, his colours are rich and vibrant, and his command of pacing is second-to-none. Each scene is a masterclass in composition, editing and storytelling; not a shot is wasted, and none of them is anything less than immaculate, proving that Almodóvar remains one of the most technically gifted directors working today. It's a really gorgeous film that continues his obsession with Hitchcockian style previously used to great effect on Bad Education, and to slightly lesser effect on Broken Embraces. Even Banderas, with his gray suits and slicked back hair, seems to have been modeled on North by Northwest-era Cary Grant.

Whilst the look of the film is in keeping with Almodóvar's mature works, the plot hearkens back to his early-'90s period, when he combined a fun and bubbly visual style with outrageously campy plots. It's a pretty perfect marriage of the two very different aspects of his career. Adapted from a novel by Thierry Jonquet, the film is essentially two insane movies grafted on to each other. Seriously, if you think the description of the first half (really the first quarter) sounds nuts, you will not believe the directions that the film takes as it winds its way to its climax, which somehow manages to be both ridiculously over the top and poignantly subdued. Almodóvar maintains the balance between humour and heart beautifully, using small moments of ridiculousness to offset the darkness at the film's heart.

The actors are keenly attuned to the tricky tone, delivering performances that are by turns playfully silly and deadly serious. Banderas delivers one of his best performances - a great achievement, considering the work he and Almodóvar have done together - as a man who is alternately sinister and sincere, charming and cruel. As ever, the second half prevents me from saying much, but I will say that he gets to play a great many sides of the same character. His co-star, Elena Anaya is equally captivating as his captive, though her greatest moments come only once the full context of her performance is known. Jan Cornet is also great as a character who is put through his paces by Banderas.

It's too soon to say whether The Skin I Live In is the best film Pedro Almodóvar has made, though it is a contender, but it's certainly one of his most fun and easily one of the best of the year. Dark and subversive, pulpy and lurid, it's a potent cocktail that will be sure to prompt discussion. Just don't give away the twists, okay?