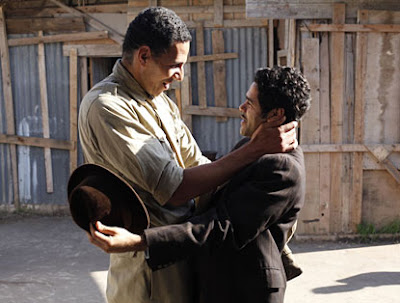 Saïd (Jamel Debbouze), Messaoud (Roschdy Zem) and Abdelkader (Sami Bouajila) are three brothers living in the town of Setif, Algeria when, on the 8th of May, 1945, the French authorities open fire on a march intended to celebrate the end of the war in Europe, initiating a massacre that leaves hundreds dead. The event was a turning point in the Algerian quest for independence, and director Rachid Bouchareb's film uses it as the starting point for a story that examines the fight for freedom through the lives of the three brothers.

For a film with an undeniably controversial subject matter - the depiction of the Setif massacre, and the role of the French authorities in particular, caused a considerable stir when the film was released - Outside The Law is painfully conventional. That's not to say that it is a bad film, but it feels less like an epic tale of a single family over several decades than a whistle-stop tour through some of the key points of a far broader conflict. After the massacre, Bouchareb separates his cast by having Messaoud join the Army and be sent to Vietnam, Abdelkader being sent to prison, where he joins the burgeoning National Liberation Front, whilst Saïd moves with their mother to a shantytown outside of Paris. These all give the film a very distinct feel, with the shantytown being particularly well realised, depicting the experience of Algerians living in France in the early fifties, but the film feels too diffuse in its early going, telling three separate stories that offer insight, but little drama.

Once the three brothers are reunited, the film gains momentum from the tension that develops between them; Abdelkader and Messaoud join the revolutionary cause, though they disagree on the use of violence since Messaoud's war experience has made him averse to killing, whilst Saïd has become a small time gangster, and feels that the conflict has nothing to with him so long as doesn't have anything to with it. Saïd's easily the most compelling character, thanks to the murky world he inhabits and his unwillingness to see what is happening around him - making him the Rick Blaine of the story - and the ever reliable Jamel Debbouze delivers a typically charming and charismatic performance.

Unfortunately, the film doesn't focus on Saïd, but instead follows Abdelkader and Messaoud as they become more involved in the liberation movement, in the process making more and more compromises, until they are forced to choose between their beliefs and the people they love. Whilst Zem and Bouajila are both very good in their respective roles, their characters aren't actually all that interesting. They have some doubts and fears, but for the most part they get on with the business of fighting their oppressors and looking cool in their '50s attire of charcoal gray suits, fedoras and two-tone shoes. They aren't very dynamic, and they serve largely to move the ungainly plot from historical point to historical point.

That's the fatal flaw of Outside The Law; despite its beautifully realised period trappings and crime film elements, it never feels like a story, so much as a history lesson. It never really captures the experience of that era, which is the chief reason why a narrative film about the Algerian War in France should exist. A documentary could detail the events and the trends of the era, but what Outside The Law could have offered, and which it does only fitfully, is a feel for what it would have been like to live at that time. As a period piece and a thriller it's perfectly functional, and as an indictment of France's shameful colonial legacy it has some powerful, shocking moments, but it could have done a great deal more with its setting and material.

Extras: A charming but slight 'Making Of' which offers some insight into the history of the period, as well as the joy the actors felt working on a "real" film on massive purpose-built sets; an illuminating interview with Bouchareb in which he talks about the inspiration for the film and the role that members of his own family played in the National Liberation Front; trailer.