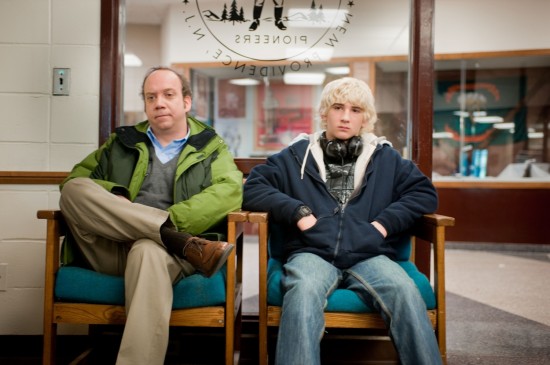 The films of writer-director, more often actor, Tom McCarthy tend to be defined by a low-key, downbeat style that allows him to explore situations which, on the surface, seem like they could make for the most precious, cliched pieces of quirky independent cinema. His first film, The Station Agent, could have very easily become a misguided issues films about the problems of dwarfs, but thanks to a subtly funny and charismatic performance from Peter Dinklage became a much more affecting story of recalcitrant people learning to connect with the people around them. His second, The Visitor, with its story of a college professor (Richard Jenkins) who forms an unlikely friendship with a pair of illegal immigrants through a shared love of Afrobeat, could have been even worse. Yet the quiet, unassuming way in which he decided to tell that story stopped it from being a piece of agitprop posturing, and turned it into a genuinely heartbreaking story of individuals coming together, only to be crushed by faceless organisations.

With his latest film, McCarthy takes on a story that's so well-trodden, I'm not sure if I need to finish a plot description of it to tell you what it's about. See if you can guess where the story is going, based on the first half of the description: Paul Giamatti plays Mike Flaherty, a lawyer whose faltering practice is doing so poorly that he can't afford to hire plumbers to unblock his toilet, so he has taken on a gig as a high school wrestling coach. Through some shady chicanery, Mike winds up being the guardian of one of his elderly clients, who he promptly squirrels away in a nursing home so that he can cash the monthly stipend for himself so that he can keep his business going and put food on his family's table. Then Kyle (Alex Shaffer), the old man's grandson, shows up, and Mike and his wife Jackie (Amy Ryan) are forced to take him in.

Yes, Win Win is an inspirational sports movie about a coach reluctantly taking on a new player, who in turn teaches him new things about life and what it means to be a good person and all of that heartwarming crap. Yet, much like McCarthy's other works, the manner in which the story is told is refreshingly unsentimental; the performances are very quiet and reserved, the music used never feels exploitatively weepy (though the upbeat, guitar-led indie rock used throughout does occasionally fall on gratingly whimsical side at times) and the script and direction are pointedly laidback. The film never feels as if it is forcing an emotional response onto the audience, instead allowing us to spend time with the characters, watching them go about their lives, and making our own minds up about what sort of people they are.

This approach means that the film can feel aimless, but it also means that plot developments that would seem obvious in a lesser film feel more organic and natural in the context of Win Win. The arrival of Kyle's absent mother, Kyle's eventual discovery of Mike's subterfuge and Mike's eventual redemption are all things that we know, deep down, have to happen in this sort of story because we know how these stories go, but they unfold in a way which feels much more honest and true to life. McCarthy never gives his characters an easy way out of their situation and never suggests that such a way out even exists.

It helps that McCarthy has assembled a great cast who are all in sync with his style. Paul Giamatti brings just the right level of charm and charisma to make us like Mike without trying to completely hide the fact that he starts the film by committing a deeply unethical act. Similarly, Amy Ryan brings to Jackie a mix of hard-edged pragmatism and common decency that makes her journey, from wanting nothing to do with Kyle to being on the verge of committing acts of terrible violence against his negligent mother, feel like a natural reaction for her character. Alex Shaffer emerges as the standout - largely through being a lesser known quantity than the others - thanks to his blank-faced performance as Kyle; he does a great job of getting across the pain and anguish that Kyle hides from the world, only occasionally letting it break through the surface.

Win Win is the sort of independent film that manages to be life-affirming without ever feeling schmaltzy, which manages to be funny without being quirky, and deeply felt without feeling painfully earnest. It's warm, witty, and it made me wish that Tom McCarthy made films more often.
By Edwin Davies
Labels: 2011, amy ryan, film review, paul giamatti, tom mccarthy, win win
Newer Post Older Post Home