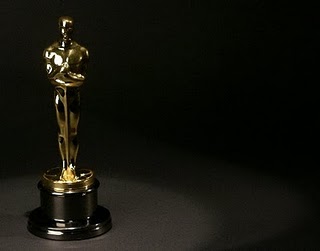 Welcome back to our annual Oscar Predictions special, a yearly exercise in beautiful futility. Having dealt with the Technical awards we will now talk about the ones that actually matter. (I'd just like to point out that, whilst I have been a bit disparaging towards the other awards, I do think that they are very important, but also realise that the Oscars that get peoples attention on posters and DVD covers are the ones I am about to discuss.)

Last year when the otherwise unheard of Argentinian crime thriller The Secret In Their Eyes beat the heavily favoured The White Ribbon, a friend of mine observed that the only thing certain about the Best Foreign Language Oscar is that the result will probably be a surprise. Having said that, I don't think that the brilliant barmy Dogtooth will win - though bless the Academy for recognising it - and that it will most likely go to Biutiful or Civilization (the winner of the Golden Globe for Best Foreign Language film last month). Since Javier Bardem has been nominated for Best Actor for Biutiful, that suggests that more Academy members have seen Biutiful than the others, so I'm going to guess that one will win.

Toy Story 3. Why pretend that anything else even has a chance? Not only is it a beautiful piece of work - as are the other two nominated films - but it'll win as a consolation prize for not winning Best Picture.

An incredibly strong category this year but it's Aaron Sorkin's to lose. By which I mean, he absolutely will win, and then its up to him to keep hold of the statuette. He wrote one of the most intelligent, witty and exciting scripts of the year about people typing away at laptops.

Part of me thinks that they might give this to Christopher Nolan for his ambitiously complex script for Inception as penance for not having nominated him for Best Director - an award that he is more deserving of - but since The King's Speech and Social Network will be battling it out for control of the night, they will sweep their respective Screenplay awards along the way.

This seems to be the toughest category to judge because everyone nominated has done great work and has something going both for and against them. I thought initially that Melissa Leo might take it for The Fighter, since she didn't win Best Actress for Frozen River a few years ago, then thought that Amy Adams being nominated for her role in the same film might split the vote. Haillee Steinfeld is the most important part of True Grit in many ways, but her youth may count against her with the aged Academy members. Jacki Weaver's turn in Animal Kingdom was revelatory and terrifying, so her just getting a nomination is a victory for her and the film, but the lack of support for the film elsewhere does not bode well for her. So that leaves us with Helena Bonham Carter, a former nominee and much beloved figure, and if they is a sweep for The King's Speech on the night - which looks increasingly likely - then she will take it home.


Best Performance by an Actor in a Supporting Role

This one's a little easier to predict since it's going to go to Christian Bale. Bale has been a fine character actor for many years who has never got the recognition for his work. His turn as former boxer turned drug addict Dickie Eklund saw him regain a lot of the fiery energy that made him such a cult star, and his outsized performance and undersized physique are perfect for Oscar.


Best Performance by an Actress in a Leading Role

Another easy one since it'll go to Natalie Portman. An actress who has rarely fulfilled her potential, her performance in Black Swan was bold, audacious and fearless. It's a terrific and terrified performance that lends the film much of its uneasy atmosphere, and it is hard to think of any performances this year for sheer commitment.

In the 2008 edition of this special, I wrote the following about Daniel Day-Lewis' chances of winning Best Actor for There Will Be Blood:


Now, I'm not saying that it's impossible that someone other than Daniel Day-Lewis could win the Oscar for Best Actor, stranger things have happened (Chicago? Chi-fucking-cago?) but what I am saying is that if he were to lose, the sheer number of jaws dropping in the Kodak Theatre would create enough force to cause California to break away from the rest of America and float out into the Pacific ocean.

I feel pretty much the same about Colin Firth winning for The King's Speech. Though I feel that it's a year late since he should have won for his heartbreaking turn in A Single Man, it's a well deserved win for a talented, underappreciated actor.

It isn't all that common for the Academy to award Best Picture and Best Director to separate films - historically, of the 81 films that have won Best Picture, 60 have also won Best Director - so it is usually a safe bet that whichever film takes one will take the other. This year I think will be one of those exceptions, and that whilst David Fincher will pick up the award for Best Director - as much for his body of work as for his work on The Social Network, it will split the difference with regards to the big award of the night. Tom Hooper could still win it, but his relative inexperience compared to Fincher, and Fincher's reputation as a modern master who has never been recognised, will probably work against him.


Okay, let's go through all the nominees that never really stood a chance quickly so we can get to the meat.

That leaves us with True Grit, The King's Speech and The Social Network. The huge box office success of True Grit - of the nominees it is currently the third most successful at the US Box Office, behind Inception and Toy Story 3 - coupled with the support shown for it in other categories bodes well for it. However, since winning for No Country For Old Men a few years ago, The Coens seem to have become Academy favourites who are nominated regardless of what film they have out. Don't get me wrong, True Grit is a fantastic piece of work, it just doesn't seem like the sort of film that would get so many nominations if The Coens weren't behind it. This suggests to me that the support is more of a smokescreen than anything, and that there is no real challenge from True Grit for the big prize of the night.

So, it comes down to a fight between the intelligent, cold and cerebral film about greed and programming, or the intelligent, warm and crowd pleasing film about friendship and stammering. I've veered between the two so much since the awards season started that I genuinely don't know which has the better chance. One is British, the other American, which suggests that The Social Network has an advantage. One is set in the past, one is aggressively modern, which suggests that The King's Speech has an advantage with the older, less Internet savvy voters. I could list their pros and cons for ages and still not come up with a answer.

Unfortunately, I have to, and I'm going to say The King's Speech. Or The Social Network. You know what, it's too close to call so I'm just going to split the difference.

Prediction: The King's Network (sounds like a cool and crazy film about assassins!)


On that frustratingly indecisive note, here ends our Oscar Predictions special. Hope that you found it informative and moderately enjoyable, I'm going to go and put my hands in a bowl of warm water so that the pain from typing so much will slowly recede. Enjoy the pageantry of the Oscar, everyone!


UPDATE: You know what? Fuck it. The King's Speech. There, I said it. I made my choice and I will stick with it, whether or not it turns out to be correct. You've got to take chances in life.
By Edwin Davies
Labels: A Single Man, Aaron Sorkin, Academy Awards, Amy Adams, Christian Bale, Colin Firth, James Franco, jeff bridges, Natalie Portman, Oscars, The King's Speech, The Social Network, True Grit
Newer Post Older Post Home