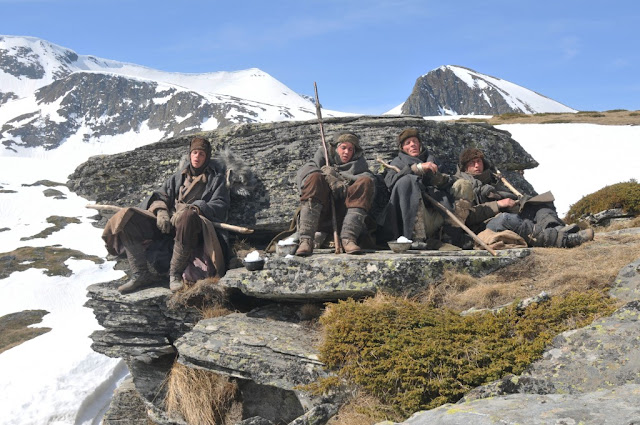 In the bleak white expanses of Siberia, a small group of prisoners plan to escape from the gulag in which they are being held. On the face of it, this shouldn't be too difficult. The gulag doesn't have high walls, security alarms, or even particularly diligent guards. What complicates matters is that beyond the barbed wire lies miles of unbroken tundra. The gulag doesn't need to be Alcatraz, because anyone who escapes faces an almost impossible journey across harsh, unyielding terrain.

However, for Janusz (Jim Sturgess) and his ragtag group, dying free is better than slowly dying in captivity. During a particularly heavy snowstorm, they make their break for freedom, knowing that even though the snow will blind them, it blinds their pursuers just as much. For most films, the story of their scheming and their escape would be enough, but for Janusz, Valka (Colin Farrell) and Mister Smith (Ed Harris) and their cohorts, their journey has only just begun. In order to be truly free, they have to travel thousands of miles to Mongolia, then to India. And they have to do it all on foot, with limited supplies and under constant threat of other people since anyone could hand them over to the authorities. So it's bit a of a toughie.

Whilst watching The Way Back, the first film from Peter Weir (Witness, The Truman Show, Master and Commander: The Far Side of the World) in seven years, based on an astonishing true story, I found myself wishing that it was longer. Now, this is quite rare for me, because I'm from the school of thought that pretty much all movies could be improved by losing some of the running time, and at 133 minutes The Way Back is none too sprightly to begin with. Still, I thought that it needed to be longer. Not because it is a work of unparalleled genius and I wanted it to go on forever - far from it: it's an okay-to-good movie at best - but because there is a great movie in The Way Back which is suffocated by Weir's merciless editing.

Throughout the film, Weir lets scenes play out only as long as is needed for the audience to get the most basic information from them, then moves on to the next scene. Whilst this is an admirable quality in a thriller or a comedy, for a would-be epic like The Way Back, a bit of breathing room is necessary both in terms of its narrative and its characters. Yet the film spends so much time struggling to breathe that it's practically asthmatic.

The first half an hour of the film takes place in the gulag, in which we meet our characters and are shown the deplorable states in which they live, but Weir breezes through establishing the setting so quickly that there is almost no time for him to establish the relationships between the characters. Janusz and Mister Smith go from being strangers to best friends in two scenes, with no sense of how they progressed from one stage to the other. This can at least partly be explained away by the men in the gulag being fundamentally suspicious of each other, but it makes their decision to work together seem surprising, almost illogical. A little bit more time setting things up at the start could have deepened their relationship, which in turn could have paid dividends once they escaped.

(Incidentally, as someone who specialised in Soviet history as part of my degree, I thought that the gulag was depicted very accurately. It's not Solzhenitsyn or anything, but they get the sense of deprivation and desperation, as well as the general atmosphere of life for enemies of the Communist state, spot on.)

Once the group escape from the gulag, and pick up a stray Polish girl (Saoirse Ronan) who breaks the cloud of isolation that stopped the men from becoming friends, the truncation of scenes only gets worse. Weir refuses to give time to those little triumphs and moments of joy - such as the moment when, whilst dying of thirst in a desert, the group stumble across a well - which could add weight to the privation that they struggle against the rest of the time. Instead of allowing the characters, and the audience, to enjoy those scant victories, he just cuts straight to the next disaster to befall them. The same happens whenever the group encounter other people and run the risk of being discovered. Rather than eking suspense out of these scenes, Weir dispenses with them in an offhandedly casual manner. This gives the whole film a subdued feeling, as if Weir was so afraid of sensationalising such a genuinely fantastic story that he winds up underplaying every aspect, making for a curiously flat experience that never really dips or peaks, just remains constant.

However, for all of my problems with the pacing of the film, I liked it. Peter Weir has, in my opinion, yet to make a boring film and The Way Back has strong enough visual storytelling, attached to such a powerful and harrowing tale of how far people are willing to go in order to survive, that it remains a diverting and entertaining watch, especially since it draws on a tradition of epic film-making that stretches back to the great works of David Lean (the scenes in the desert, particularly, strongly echo Lawrence of Arabia). The cast also acquit themselves well even when, as in the case of Colin Farrell, they are lumbered with Russian accents that would make Boris Badenov blush. The standouts are Sturgess and Ronan, who demonstrate why they are amongst the most promising young actors currently working, and Harris, who is one of the most charismatic and watchable actors currently working.